Acting to Define an Arboreal Future 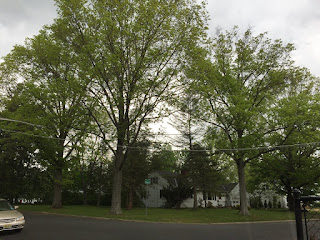 When it comes to trees in Princeton, there's often a frontyard/backyard dichotomy, exemplified by this yard, across from Potts Park. A corner lot, its quartet of mature pin oaks extend their limbs well out over the pavement, providing shade even though they're on the north side of the street. The combination of their encompassing shade and their transpiration keep the house and street much cooler in the summer, and oaks support a broad diversity of insect species. While many pin and red oaks are losing a battle with bacterial leaf scorch, these appear healthy, perhaps due in part to not being constricted by a sidewalk.

The planting of those four trees, perhaps 60 years ago, was an intentional act, based on the premise that the future would come, and is worth influencing. Whoever planted them would be proud of having left such a legacy. 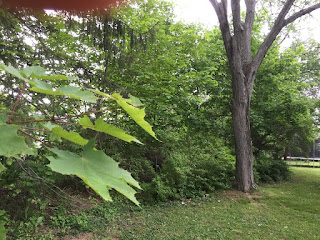 The back fenceline of the same property, though, tells a different story. As with so many back fencelines in Princeton, the next generation of trees is being decided not by intentional action but by default. In this case, that means Norway maples, which are adapted to grow in the shade and eventually displace the native species. The Norway maples cast a very dense shade that discourages anything from growing underneath them, and their leaves are largely inedible to insects.

Particularly in this time of political paralysis, when our future is being defined by unintended consequences, it can be satisfying to actively manage a yard's arboreal future. If homeowners lack the time or knowledge to act on their own, maybe there should be another class of arborists, armed not with chainsaws and cranes but loppers and handsaws, called in to intervene not when trees are large and failing, but when the next generation is just beginning to take shape along the fenceline.
Posted by Steve Hiltner at Friday, May 27, 2016