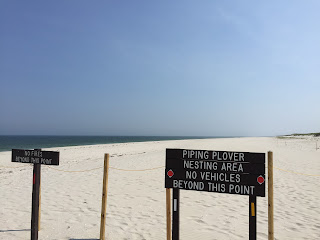 Five weeks ago, at the Barnegat Beach Buggy Access at the far end of Island Beach State Park, the choice was easy. To the south stretched a beach fashioned by wind and ruled by birds. 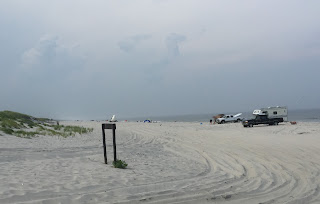 To the north, tire tracks and traffic. 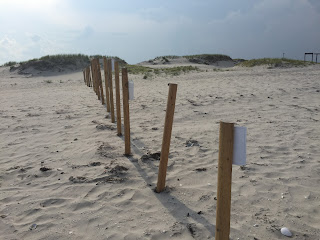 Someone, or some governmental agency that values birds and the people who want them around, had drawn a line in the sand beyond which no vehicles could go, and we gratefully stepped across it into the car-free, bird-friendly zone to hike south along the beach towards the distant lighthouse. 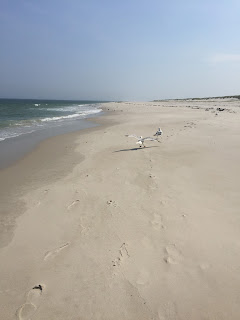 The first impression, after a gap in beach visits of several years, was the wonderful, salty smell of the sea that must touch memories deep in the DNA of who we are and where we come from.

This is what the Jersey beach can be on a Monday in late July. A threat of rain surely helped make the beach ours for the afternoon. 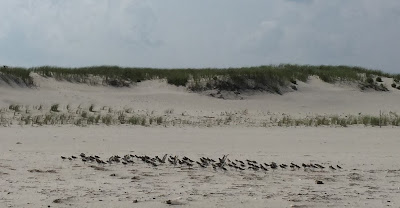 The plovers congregated in masses some distance in from the surf. 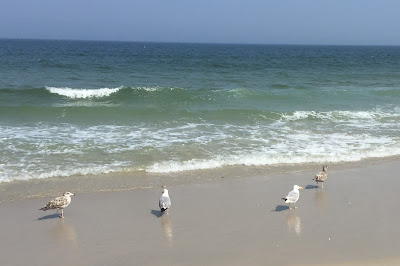 The seagulls, terns and plovers had the run of the place, each with its own approach to harvesting the ocean's offerings. 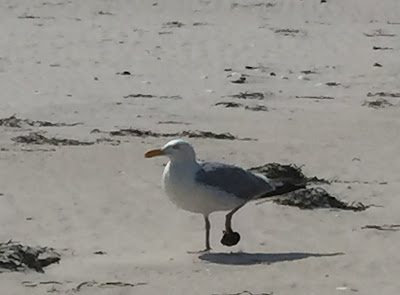 We thought this gull had caught a crab, but it turned out the crab, or was it a clam, had caught the gull. It hobbled around, unsure what to do about the prey's iron grip. 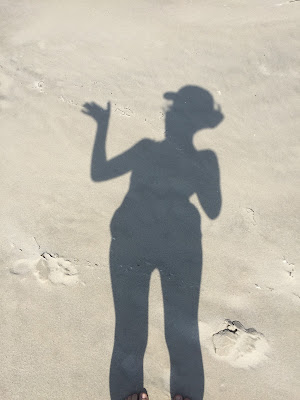 Which way's the lighthouse? That way, said the shadow in the sand. 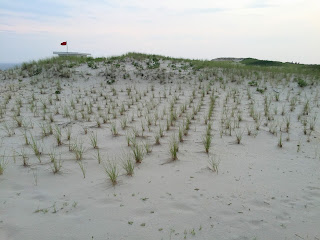 Cheers for the planters of beach grass, which in the post-Hurricane Sandy appraisal proved more effective than hardened walls at protecting the interior of islands. 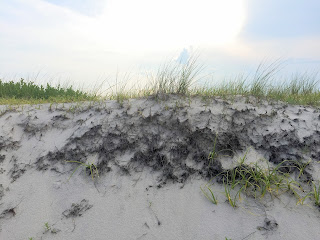 Where the entry for vehicles was cut in the dune, you could see the impressive root structure under the soft waves of green. 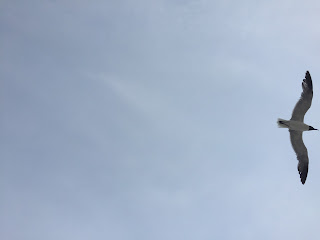 After the walk, a quick swim and some cloud bathing. The rain finally came on our drive back. 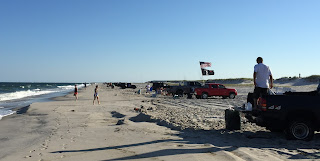 A return trip this past week to the same stretch of Island Beach State Park revealed a far different scene. The line in the sand was gone, and the plovers were displaced by a fleet of pickup trucks, their front bumpers bristling with fishing rods projecting high in the air, and 4X4 truck beds stuffed with beach chairs and dinner supplies. Flags waved above these beloved machines, 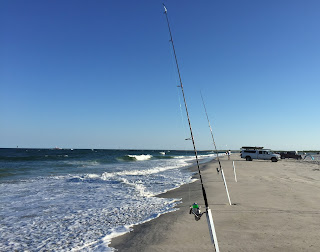 and fishing rods were planted in the sand, though for what purpose wasn't always clear. Some fishing rods had no line extending out into the ocean. Some had no line, period. A friendly fisherman explained that fishing rods were required for anyone parked along that stretch of beach. He himself had been fishing for two years, since retiring, and had yet to catch a fish. It's a lifestyle choice, and he and his wife appeared to feel lucky whether they caught fish or not. 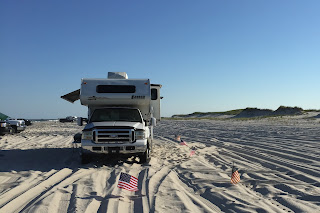 Though we could still enjoy the walk, it felt like we had entered one of the myriad car commercials that relentlessly seek to lodge the internal combustion engine deep in your psyche, so that you define yourself by the size and make of your iron steed. Here was nature to run roughshod over and be laid claim to with flags planted in the sand.

Ironies abounded. A beach torn up out of love for the ocean. Fishermen with little interest in catching fish. A laying claim to the land using vehicles that hasten the rising ocean's next storm-fed eviction notice. Using the American flag to ornament a lifestyle that will ultimately sacrifice much of the nation's coastal real estate. Wasn't the nation founded by people who cared about the future, and did all they could to insure the nation's perpetuity? And weren't we, by driving to the beach, part of the same bargain with the devil? How long will widespread denial and governmental paralysis keep us in this ethical bind, when the free energy of wind and sun are all around us?

We need a new saying for our time, that expresses how the lifestyle people value is threatened by resistance to changing its energy source: "The more things stay the same, the more things will change." 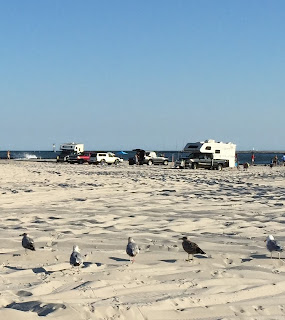 If the gulls had thought the beach was theirs, they were clearly mistaken. 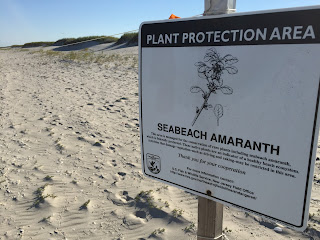 Still, there was an ocean breeze, and an air of relaxation and enjoyment. The line in the sand was displaced but not eliminated. 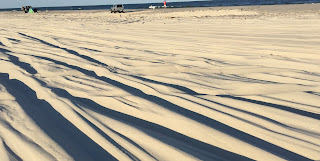 Shadows lent beauty even to ruts in the sand. 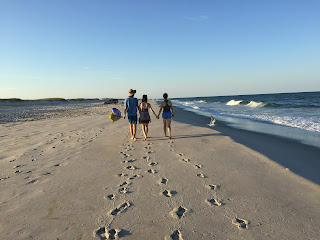 And there was peace in seeing the next generation grown up, walking in peace and affection, along that wonderful ribbon where land and water gather to meet the sky.
Posted by Steve Hiltner at Friday, September 02, 2016