Where Have All the Flowers Gone at the Neuroscience Building? 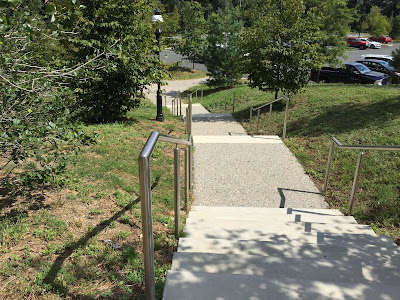 What's wrong with this picture? Something's missing, and that something is all the native grasses and wildflowers planted here just two years prior, as part of a naturalistic landscaping of Princeton University's neuroscience building. 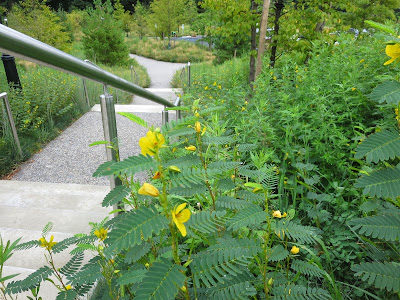 In 2014, it looked like this, with partridge pea showing its stuff and little bluestem grasses waving gracefully in the breeze. In a post, I celebrated the planting, and an accompanying raingarden that catches runoff from the road. It was a wonderful example of how native meadow could be integrated into a peopled landscape. But sometime between then and now, there was a decision to abort. Everything got mowed down, making the area look like the lawn didn't take. 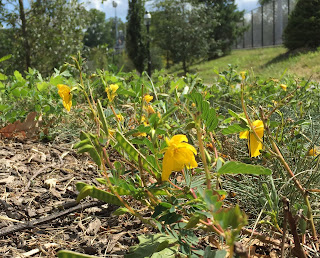 The partridge pea is hanging low, blooming where it can in midget form. 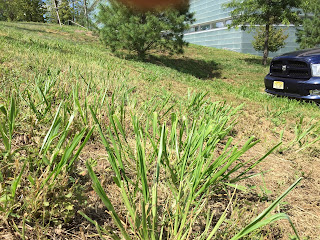 And the native grasses show as discrete bunches foiled in their rise towards the sun.

We've seen this elsewhere in town, at Harrison Street Park, and at Westminster Choir College's parking lot. A design is developed, often at considerable expense, the native plants are installed, there's congratulations all around on vision and sustainability, and then a few years later the mowers reclaim the area for a default landscaping of trees and turf. 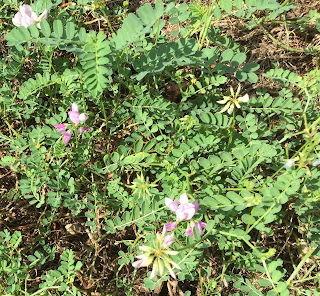 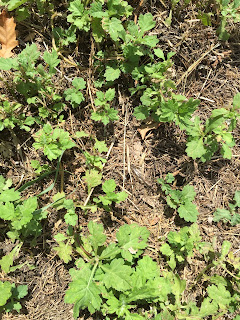 And here's another: mugwort. Maybe they hitchhiked in as contaminant in the seed mix, or in the topsoil trucked in for the landscaping, or were already on-site in the resident soil. Whatever the source, they grew up and over the intended plants, and the facilities crew decided they couldn't possibly weed it all out.

With careful maintenance the first couple years, the weeds might have been few enough to remove and the intended plants could have filled in, minimizing maintenance needs in the years that followed. But as we've seen with climate change, it's not human nature to catch problems early, when they hardly seem like problems at all. Though university facilities staff are probably better trained than most, they still may not have been familiar enough with the intended plants and weeds to know which to pull. 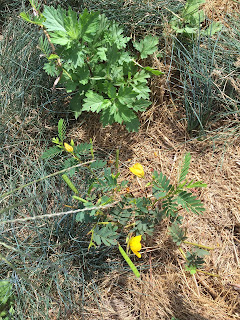 Now everything's mixed together. Here's mugwort in the upper left, partridge pea below, and some sort of blue oats-like grass that was clearly intended. 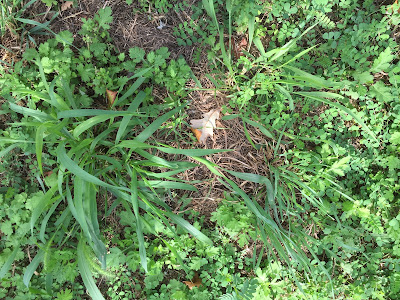 Here's mugwort and crown vetch intermixed with the native grasses.

You could say that the crown vetch has a pretty flower, but what was lost by the dominance of these two invasive species is the way the intended plants, mostly native, grow without displacing what's around them. Little bluestem is a bunch grass that stays in place, at a modest height, and the partridge pea intermingles without smothering. Mugwort, in contrast, grows tall, spreads aggressively, and undoubtedly fell over into the walkway. Crown vetch crawls over the plants around it, tending towards monoculture. The effect of grace, beauty and diversity is lost over time. 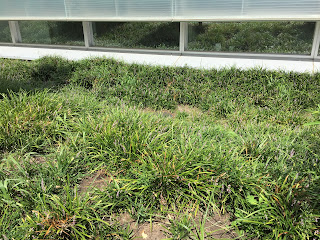 So, what's to become of the planting? Will it all be converted to a static planting of liriope? 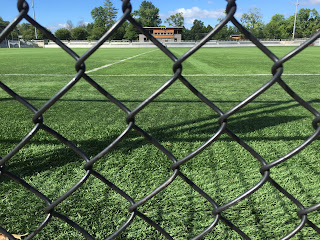 Or mimic Roberts Stadium, just across the sidewalk?

Or will they find a way to restore some version of the original vision of native meadow, which would take close tending at first but ultimately be lower maintenance than mowing?

Facilities staff are working with their landscape architect to reassess.
Posted by Steve Hiltner at Tuesday, September 27, 2016