To Save a Raingarden, Know Your Weeds 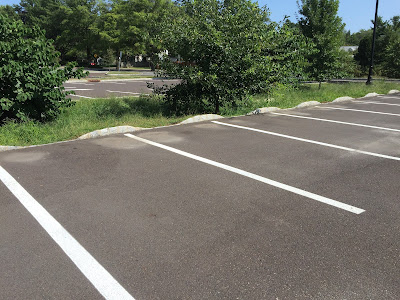 This is one of several posts intended to show how a knowledge of weeds can boost one's confidence as a gardener. The more confident gardeners we have in Princeton and elsewhere, the more gardens are likely to survive. Photos of some common weeds are below, but first, some background.

A number of local, designed native plantings have been mowed down in the past year or two. Examples include plantings at Princeton University, Harrison Street Park, and Westminster Choir College. The latter is featured in this post.

As with recycling programs, that mundane-sounding activity called maintenance determines success or failure. Without skilled, attentive management, all those lovely designs are just whistling in the wind. Though design and installation get all the respect and publicity, maintenance requires far more skill, because the gardener needs to know not only the intended native plants but also the dozens of weeds that will inevitably show up. Furthermore, each species must be recognized in all its different life stages.

How shall we define a weed? Since the intention of this raingarden is a mix of function (filter runoff from the pavement, provide some habitat) and ornament, a weed here is defined as a plant that lacks ornamental qualities and/or proves too aggressive. Even an intended plant can later be considered a weed if it becomes too aggressive in a particular situation.

If one stays on top of things, these plantings are relatively easy to maintain. But allow aggressive weeds like mugwort, bindweed, Canada thistle, or crown vetch to get established, and the owner will sooner or later decide it's all too much trouble, and mow it all down. Lawn is the ultimate control of a seemingly unruly nature.

This is what happened at Westminster Choir College's raingardens. Walking our dog, Leo, I watched over several years as the weeds moved in, competing with the intended wildflowers and switchgrass. Last year, the amaranth grew 7 feet tall. That must have done it, because this year, everything was mowed to the ground.

I had offered my services before, but this year I reached out to the sustainability director at Rider University, of which Westminster is a part, and offered to weed the raingardens and gradually shift them back to natives if they would commit to not mowing. She agreed, and the mowing stopped. Essentially, I had just acquired a new pet, a hybrid between tame and wild, requiring considerable human intervention at first, but less as time goes on if the "parenting" is good. 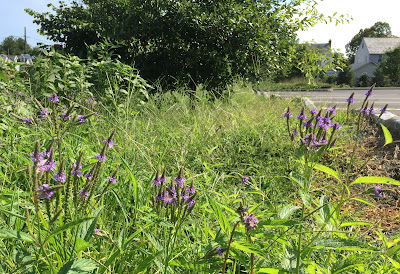 The resulting growth would be a bit intimidating for anyone who doesn't know plants. There's a sea of crabgrass, nutsedge has an ominous foothold, the amaranth is again showing vertical ambitions, but amidst all this are some promising signs. Blue vervain is making a comeback, attracting skipper butterflies, 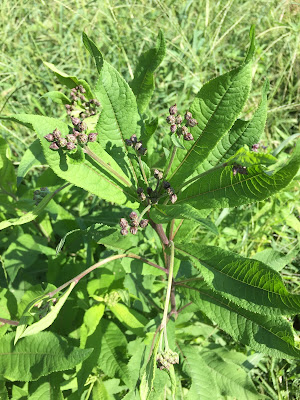 and a robust ironweed is poised to flower in its new freedom from the lawn mower.

Below are some of the weeds to be contended with. Different strategies are required, depending on the species. A few weeds, like pilewort, three seeded mercury, and horseweed, are native, but most are introduced. 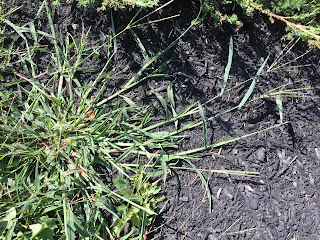 Crabgrass! Note the horizontal growth form and the finger-like seedheads. No attempt to control it, given it's vast numbers. It's an annual, so will die this fall and hopefully be less of an issue next spring as the intended plants begin shading it out. 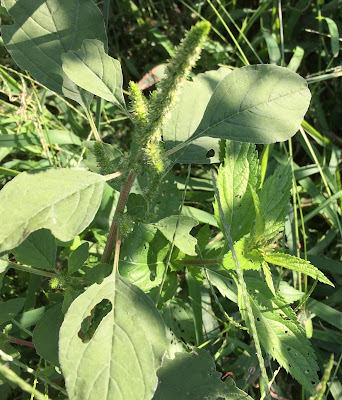 Green amaranth overgrowing a blue vervain (yet to flower). It helps to note the smooth margins of the amaranth's leaves, contrasting with the toothed leaves of the vervain underneath it on the right. Also, a different shade of green. 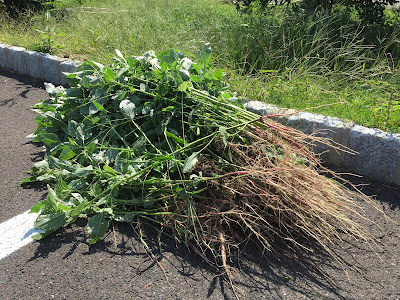 All the amaranth came out, because it would be unsightly if allowed to grow tall, and thereby give Westminster an excuse to begin mowing again.

Fortunately, it had rained a couple days prior, the soil was sufficiently soft, and their taproots yielded to a slow, firm tug. Since weeding is so much easier after a rain, a flexible maintenance schedule can greatly reduce the work needed. 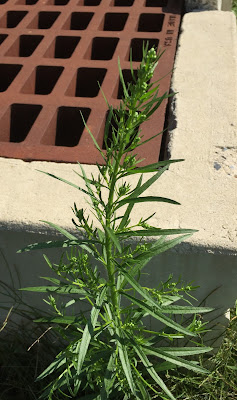 Horseweed has had a great year in farm fields and empty lots, and is vying for space here. Pull before it can set seed. 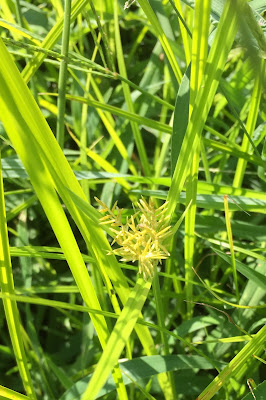 Nutsedge spreads underground, invading lawns and flower beds. Pulls easily, but likely will pop up again, a bit weaker each time. It's a bamboo situation in miniature, requiring that one steadily deprive the roots of energy from those solar panels called leaves. 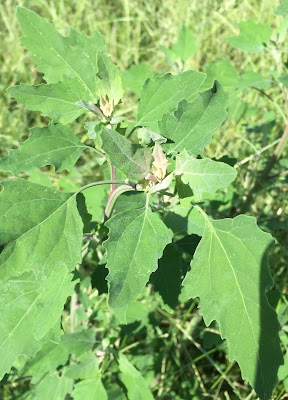 One of my favorite edibles, lambs quarters. Either pull or leave a few to munch on. Can get way too tall, though. 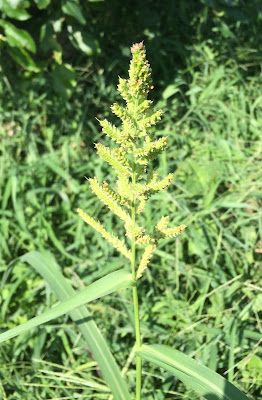 Barnyard grass is not particularly aggressive, but is best pulled. 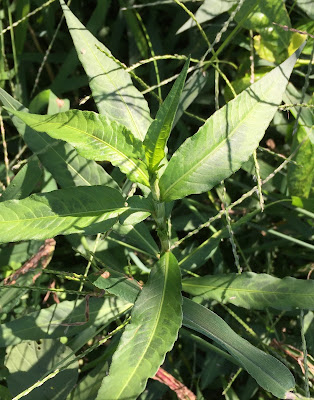 A species of smartweed. These Polygonums tend to be problematic, and sometimes very aggressive. Likely to get pulled. 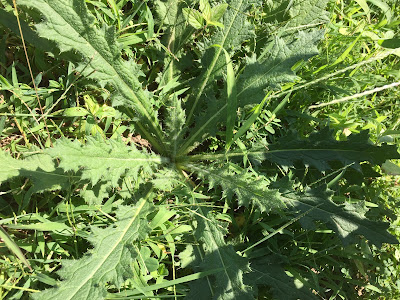 There are different kinds of thistles. This is not the dreaded Canada thistle that invades with its underground rhizomes, but will likely come out if I remember to bring gloves or a shovel. 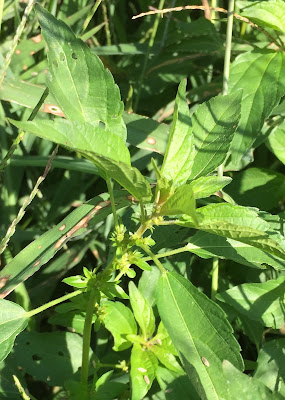 Three seeded mercury is a native annual with a weedy look to it. 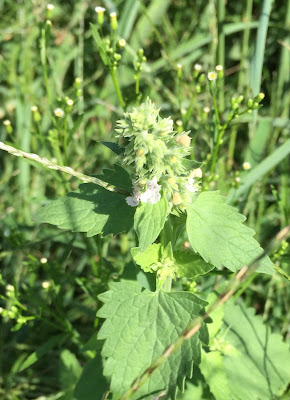 Surely a mint, with the characteristic square stem, probably catnip, with the tiny flowers of horseweed in the background. Only one in the whole raingarden.

The weeding session took less than an hour, given the raingarden's soft soil. Maintaining a raingarden is 90% knowledge and strategy, 10% work. Know your weeds and their potential for being problematic, time the weeding for when the ground is soft and before the weeds spread or set seed, and pretty soon the raingarden will be giving a lot more than it takes. These are the principals that have worked in the past, and are now being tested at Westminster.
Posted by Steve Hiltner at Monday, September 05, 2016