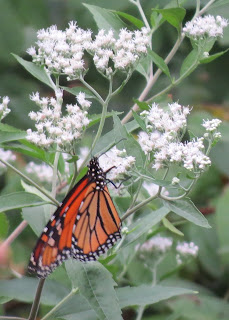 Three days ago, a monarch finally came and lingered for a short while in the backyard, moving quickly from one late-flowering thoroughwort to another, gathering nectar for its long journey to Mexico. Several generations removed from the monarchs that flew north from the mountains of Mexico this past March, this individual is part of that special end of the season generation that will fly 2500 miles south and west to where they gather for the winter, west of Mexico City. Unlike the generations that headed north, it will not become sexually mature until next spring.

Monarchs had a modest rebound in numbers last year after their numbers dwindled, largely due to the elimination of milkweed from farm fields and edges since Roundup-Ready corn and soybeans became the norm. There was optimism this year that they could rebound further, but an "unprecedented" ice storm hit their sanctuary in the Mexican mountains in March just as they were leaving. Some had already headed north, but many were killed. That "unprecedented" makes one think of climate change's impact, which makes restoring habitat all the more important.

I had caught a glimpse of three other monarchs earlier in the summer, but none that settled on a flower. Fortunately, there was a 50x canon camera around to capture the fresh beauty of this magnificent insect, poised at the beginning of its long journey.

Monarchs in NJ head south through Cape May, and you can read about those who track their passage and count their numbers there on their blog.

I saw no caterpillars this year. In 2010, we had many on the swamp milkweeds in the backyard. My daughter grew some in a jar.

As a kid growing up in southeastern Wisconsin, I remember a day, probably in the 1960s, when the sky was filled with monarchs heading south. Thousands upon thousands, swirling, dancing, there all day, and then gone. It's one of those magnificent nature-in-abundance memories that feeds a vision for what could be if we nurtured nature's inborn vitality. In Princeton, there was a field full (in the tens or hundreds rather than thousands) of monarchs in 2007, feeding on tickseed sunflowers, at that sharp bend in Quaker Road, near the canal. Tickseed sunflowers (Bidens sp.) are annuals, and appear to have given way to other species out there.