Norway Maples, and Seeing the Future

One purpose of this blog is to help people to look at nature now and see where it's headed. Every gardener imagines the harvest while planting the seeds. In science, one extrapolates from past and current trends to predict the future. With practice, one can look at a woodland and see not only the present but past and future as well. As a land manager, one envisions two futures--one without intervention, one with. Because we've altered local habitats so much--through altered hydrology, past farming, introduced species, banishment of important forces like fire and predators like mountain lions and wolves--intervention can help restore functionality that no longer happens naturally.

Autumn is the easiest time to divine a woods' future, because each species shows its colors, making trends easy to spot. For instance, learn the Norway maple's brand of yellow this time of year, and you'll start seeing them all over town. Unpalatable to deer, they rise unnoticed until they become full-sized trees, mostly along backyard fencelines. 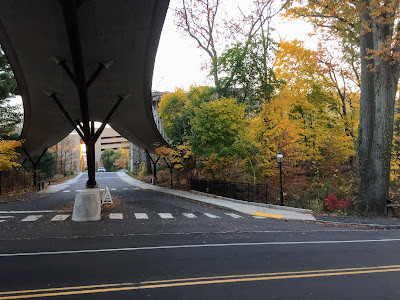 That's what's happening on a larger scale in the hidden valley between the Princeton University chemistry building and Washington Road. That mix of yellow and lingering green indicates that the Norway Maples are taking over the top of the valley, 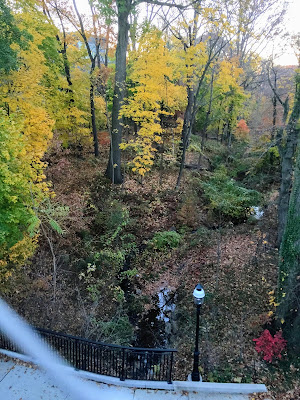 and extending downstream. This is the perfect time of year to see the extensive invasion by this nonnative tree. Why have I on multiple occasions urged the university grounds staff to cut or girdle these trees, despite their attractive yellow in autumn? 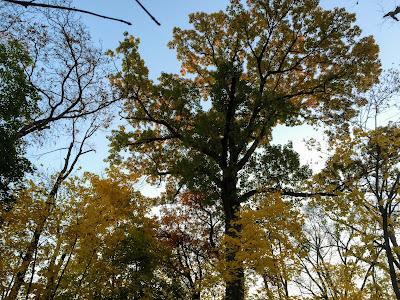 The problem is an ecological one. This forest, one of Princeton's oldest, is steadily shifting from native trees that feed local wildlife to nonnative vegetation that does not. As the shade-tolerant Norway Maples push up into the native canopy above, their competition for water and nutrients weakens the giant oaks and black gums, hastening their decline and increasing their susceptibility to wind storms. Young native trees--preferred by deer and less shade tolerant--can't compete with the Norway Maples, which grow quickly, green up sooner in spring and drop their leaves later in the fall. This photo shows a 1-2 centuries old oak with a sea of Norway maples rising underneath.

Fortunately, most Princeton woodlands have not been invaded by Norway maple, though it would be worth it for land managers to take a walk through the woods to see if they are starting to get established elsewhere in Princeton's open space. 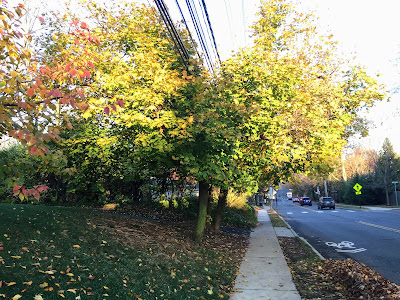 Except in that Washington Rd. gorge woods, they have proven invasive only in people's yards, showing highly localized invasiveness much like Japanese maples and Rose of Sharon. This photo, taken along North Harrison Street, shows the classic problem with ignoring the silent ascent of Norway maples, in this case under a powerline. Chances are they grew unnoticed by the homeowner, and now will require repeated pruning to keep them from threatening the wires.

At least the half of the tree closer to the street shades the pavement in the summer, 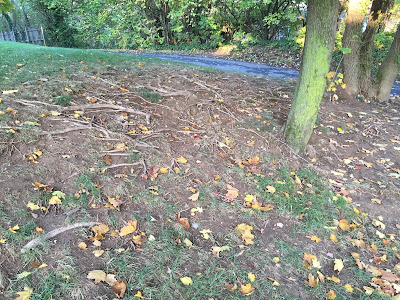 but another annoying aspect of the species--their dense shade and aggressive roots that leave little sun or water for the lawn--has made it impossible to grow grass on the steep slope.

Like climate change and the nonpoint pollution of our waterways, the Norway maple silently transforms the world, undermining food chains and biodiversity, while our attention is elsewhere.
Posted by Steve Hiltner at Saturday, November 26, 2016