What a Little Dew Can Do

Here's a bit of serendipity. Shadows play upon the grounds of Princeton Battlefield, charmed with dew on a Saturday morning. 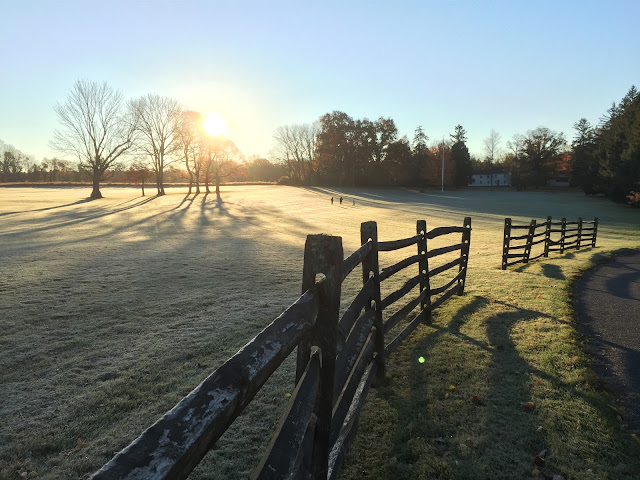 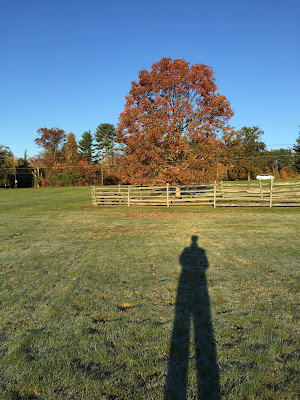 Ever the resident tourist, a shadow selfie with Mercer Oak II. Had no luck getting the shadow to smile. 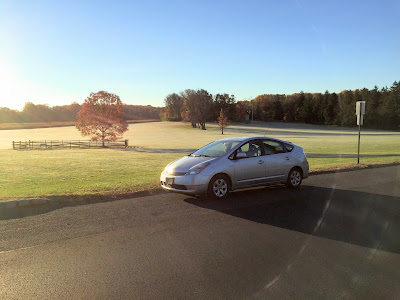 Sorry, but you can't look at any screen--TV or computer--without at least one obligatory car commercial popping up. The sound track runs something like, "If George Washington were alive today, ...", though he might eschew fossil fuel altogether and stick with a horse. Those founding fathers thought about long term consequence. What ever happened to that kind of thinking?

The original motivation for stopping during a drive by of the Battlefield was documentation, not aesthetics: to photograph the invasive porcelainberry overgrowing flowering dogwoods planted as part of the nation's bicentennial celebrations in 1976. 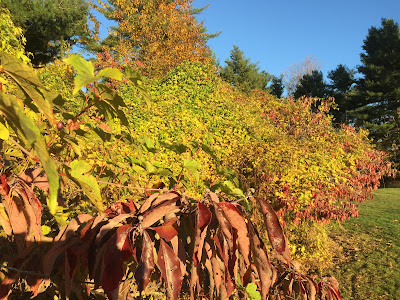 One of my recurrent cause celebres is to save the Dogwood Garden Club's dogwood legacy from the aggressive vine growth. From the green/yellow of the porcelainberry vines crawling over the red leaves of the dogwoods, you can see who won this year's skirmish. The Dogwood Garden Club doesn't know who I am, and for all I know they've forgotten that they ever planted these trees along the field's edge in the first place. 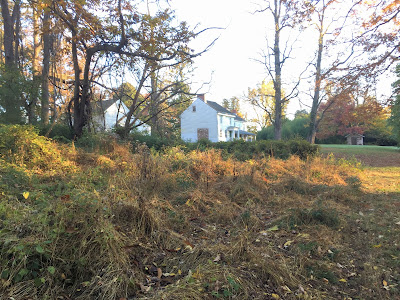 There was also an obligatory photo of the great disappearing bamboo patch. Two years ago, this was a thick clone of bamboo growing out over the path down to the Quaker Meeting House, but a series of well-timed cuttings with magic loppers over the past couple years have sapped vigor from the bamboo's giant root system. The decisive strategic intervention came this past June, when Kip Cherry and I cut down the regrowth from a cutting in the spring. It was some inconvenient toil, but deprived of any payback from that big investment in regrowth--two years in a row--the bamboo has nearly given up. A visit next spring should be light work, followed by a refreshing beverage on the Clark House porch. 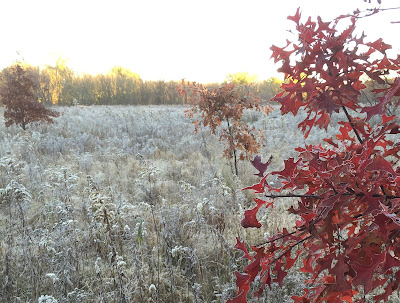 Dew was also working some magic on the vista on Quaker Road near the towpath. Scattered pin oaks in a field of goldenrods. 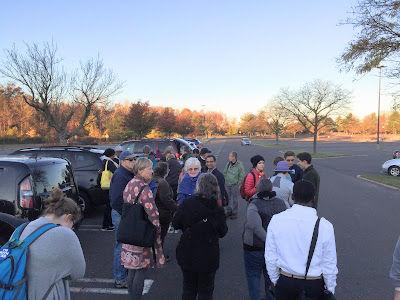 Thanks goes to my daughter Anna for getting me out that way early on a Saturday, to drop her off for a busride to Philadelphia to do some canvassing. Otherwise, that encounter with morning dew would have never happened. Finally, a reason to be thankful for this election season.
Posted by Steve Hiltner at Sunday, November 06, 2016