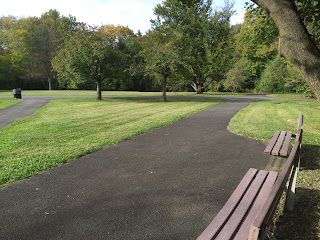 It doesn't look like much of a nature trail, this paved walkway that makes a broad circle around the perimeter of Quarry Park. 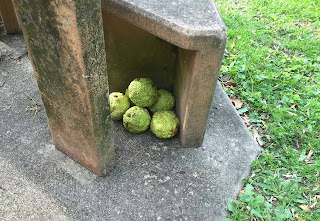 But what's this? On one recent visit, it was clear some youthful imaginations had turned this peaceful park into something far more dramatic. There was evidence of defenses assembled against attack, Swiss Family Robinson-style. A wall of sticks had been constructed across the trail, to slow any invaders, and caches of ammunition the size of small cannonballs stashed here and there. It took me back to my own childhood landscape, stashing horse chestnuts in strategic spots for later use. I don't remember any actual attacks, but the preparations were serious business. 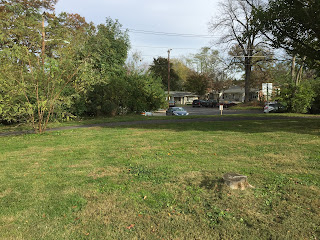 A stump and a clearing near Spruce Circle are the legacy of another bit of drama, when powerful winds swept through a few years ago, knocking down a grove of trees. 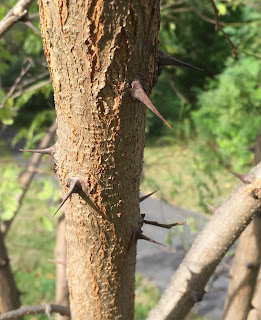 One of the resprouts, a black locust, bears thorns that may once have provided vital defense, but now seem, like the kids' defenses, to be aimed at imaginary foes. 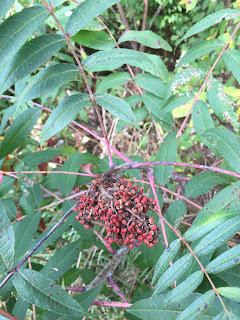 Head down the path at the lower end of the park, and the plain lawn yields to some diversity. Here's a smooth sumac, 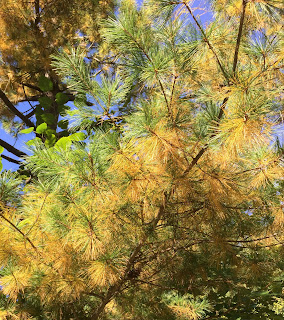 and a white pine dropping its older needles. 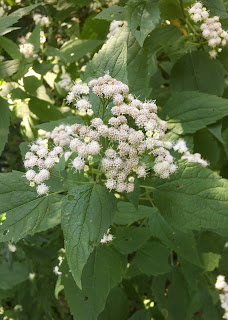 It's been a good year for white snakeroot, whose scientific name was recently changed from Eupatorium rugosum to Ageratina altissima, apparently to vex botanists who commit scientific names to memory. The plant is common in part because it is toxic, discouraging the deer. 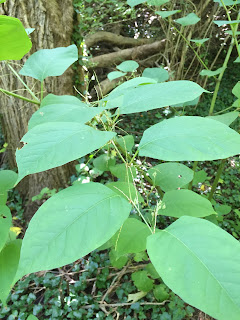 Japanese knotweed can form dense, exclusionary masses along the banks of the StonyBrook elsewhere in Princeton, but on this upland soil in the shade it seems benign, 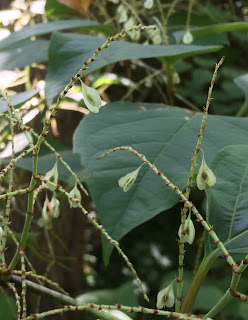 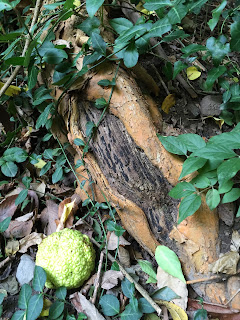 Sure enough, growing in the midst of a default thicket of honeysuckle shrubs at the bottom of the park, one osage orange tree, bearing not oranges but these curious green balls, which may once have been dispersed by megafauna, but now clearly get around thanks to kids. The tree has a rich history, with remarkably dense and rot-resistant wood used for bows and fenceposts.
Posted by Steve Hiltner at Thursday, November 10, 2016