When my daughters came in the house yesterday evening to report that a raccoon had scared them en route to closing up the chicken coop, it didn't even occur to me that it happened to be Halloween night. 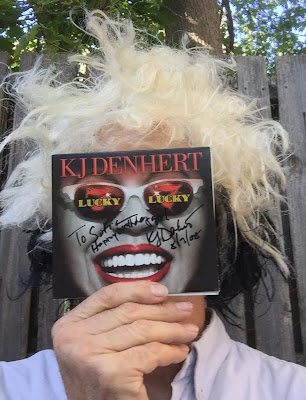 True, there had been a curious masked visitor in the backyard earlier in the day, someone wearing a wig and his favorite CD. That two minute selfie session with a cellphone had been the full extent of our observance of Halloween, other than the white plastic pumpkin decorating the "Wishing the Earth Well" leaf corral out front next to the sidewalk. Our street is not popular with trick or treaters to begin with, and we did nothing to lure them.

The lack of lights and decoration did not deter the night's one trick or treater from showing up, however, not at the front door but behind the house. Though raccoons are considered ubiquitous urban denizens, we had not seen one in the neighborhood since 2004, when a confused specimen passed through our backyard, looking lost.

My daughter's sighting didn't come as a complete surprise, though. 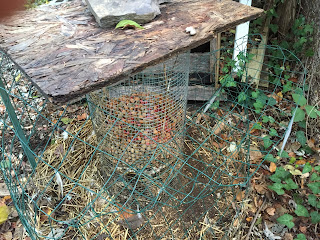 First, it explained what, or who, had been bending the wire fencing of one of my backyard leaf corrals, in a recurrent and unsuccessful attempt to get at its inner core of kitchen scraps. The rotting lettuce and old dogfood, out of reach behind hardware cloth, was the treat, and it was surprising the raccoon hadn't figure out a trick to get at it.

Second, there was the question of whether the raccoon's interest went beyond kitchen scraps to include our four chickens, two of which had taken to roosting in nearby evergreens and bushes rather than taking shelter in the coop. The assumption is that, come winter, if winter comes, the chickens would drop their summer dalliance with self-sufficiency and take refuge in the coop at night.

The girls gave me the flashlight, to lead the daring expedition back to where the raccoon had been spotted. 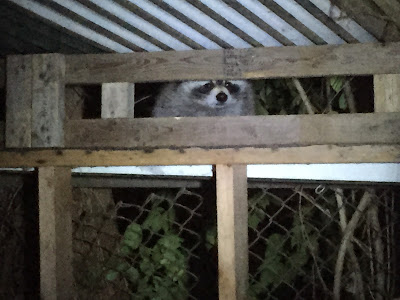 "Do you think it has rabies?", one of my daughters asked from behind me, not understanding why I wasn't more fearful. When I see a raccoon, I'm cautious of course, but inside, my heart begins to melt. My thoughts return to when they would visit my childhood home, surrounded by woods at the end of a road on the outskirts of a small Wisconsin town. They had been getting into our garbage cans, and all attempts to keep them out had failed.

One day, in broad daylight, a raccoon showed up in our side yard, sad looking, weak, clearly a reject from raccoon society. We named it Rangy, for its bedraggled appearance, took pity on it and gave it some food.

It may have been about this time that my father realized that, if we put our food scraps in a pan next to the woods, the raccoons would leave our garbage cans alone. This proved to be the beginning of a wonderful friendship. As the raccoons began to visit the pan, we decided to install a light to illuminate the edge of the woods, the better to see them. Soon we were tossing them peanuts in the shell from an open window. Closer they came, caution slowly yielding on both sides, until we reached the point where we could step out onto the back patio, hold a peanut out, and they would approach. They'd stand up gracefully and reach for it with those wonderful, delicate paws, take the peanut gently and scoot a short distance away to feast upon it. More and more came. The grownups would bring their young the next year. One night we counted 16. Rangy the Reject had spawned a coming together of human and raccoon society.

This was the era of books like Rascal, and Raccoons are the Smartest People. We knew what rabies was, had seen it occasionally in the odd behavior of an animal--like the groundhog that confronted me on a town street while biking home from school--and we respected the wildness of raccoons too much to consider having one as a pet. But that didn't deter us from appreciating all that is wonderful about them. One evening, we opened the kitchen door to see four raccoon cubs climbing on the screen door, their mother on the porch behind them. The mother was Whitey, the tamest and most gentle of them all, named for the beautiful white fur on her underside. She had brought her new family to meet us. By then, we were actually letting her come in the kitchen door a few feet to get peanuts. Somewhere, there's a photo of her reaching up to touch the knob on our little black and white TV. Of course, we always made sure she had an escape route, so as not to feel trapped. No one ever dared get between her and the open door. 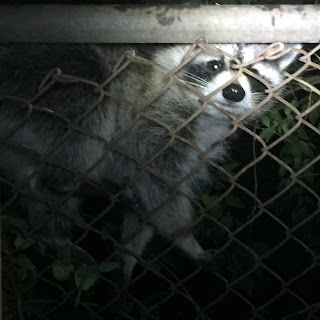 The raccoon that visited us last night, like Rangy long ago, also seemed like a reject. It didn't run away at our approach, but instead remained perched on the fence, looking at us. Though large, it seemed weak and slow. Finally, it climbed awkwardly down the fence and disappeared into the dark. 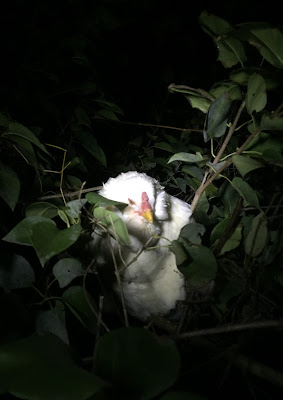 To be on the safe side, we decided to pluck Buffy, the last of our first batch of chickens from five years ago, from her perch in a nearby lilac bush, and put her in the coop with two others. We closed the coop and headed back in.

To some extent, our free range chickens offer a similar experience to what I had as a child. We feed them, but mostly they forage for themselves, tame and yet living their own lives. Where once I delighted as the wild became more tame, with the chickens we watch as the tame explore aspects of the wild. Last night, those two worlds intersected next to the chicken coop. I thought of leaving some food out for the raccoon in nights to come, but then thought again. How to handle this convergence, for the good of all involved, is not at all clear. I don't expect any reprise of a childhood in small town Wisconsin. Whether the answer is trick or treat, our backyard Halloween is just beginning.