Chickens and the Origins of Flight 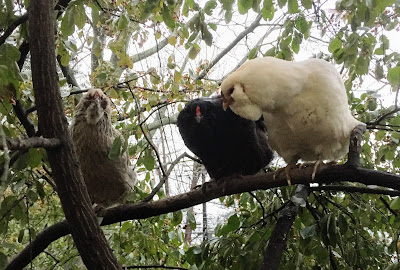 Observing all the different uses our free-range chickens put their wings and feathers to has led this week to some speculation about how flight evolved. Chickens are particularly instructive in that they are not capable of full-fledged flight. They are, however, capable of wing-assisted hops--to reach the top of a fence, or to flutter upwards from branch to branch as they climb to their favorite roosting spot. And in the morning, when they descend, they use their wings to break their fall to the ground. Back when we were picking the chickens up and holding them, it was a delight, and convenient, to just toss them into the air and let them flutter softly down.

Their wings provide adjustable warmth, fluffed to varying degrees to match the cold of a particular night. That capacity to manipulate their feathers for warmth translates well to any micro-adjustments feathers make to optimize flight. As mentioned in a post describing a hawk attack, the strong quills of a chicken's wings also provide an incredibly light-weight, multi-layered armor, any portion of which can be shed so that a predator, thinking it has a firm grasp on the chicken, finds itself instead holding only a feather or two while the chicken escapes. That multilayered defense serves as well to shed the rain. Feathers also are mobilized for a powerful display, spreadable to make the chicken look bigger to potential predators, or more attractive to a potential mate.

After observing a chicken, flight can seem like an afterthought--a bit of serendipity that came to pass after wings and feathers gradually developed for a host of other purposes, each adaptive use enabling another in a positive feedback loop that ultimately led to the purity of flight.
Posted by Steve Hiltner at Thursday, February 02, 2017