Both of these non-native wildflowers are in the family Ranunculaceae. Both bloom early and have pretty yellow flowers. While one appears to be modest and highly local in its spread, the other spreads so quickly across yards and into neighbors' yards and floodplains as to pose a threat to gardens and natural areas alike. 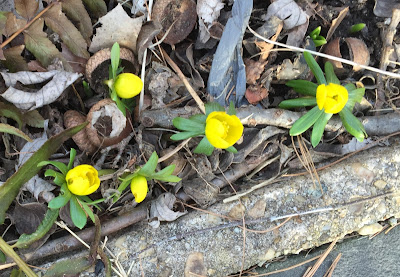 Here's winter aconite (Eranthis hyemalis) opening up a week ago in my garden, a legacy from the previous owner. Its modest spread is easily contained. I've never seen it spreading into nature preserves. Note the leaf shape, which distinguishes it from the related wildflower below. 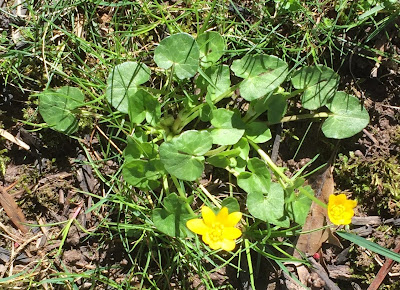 Update: For comparison, here is one of the first blooms of lesser celandine in 2021, on March 30. Note the shape of the leaves, which are "entire" rather than lobed. Just to confuse things, lesser celandine is also called fig buttercup, and its latin name Ranunculus ficaria has apparently changed to Ficaria verna.
People think lesser celandine is pretty, transplant it to their gardens, then begin having regrets as it spreads uncontrollably to dominate their gardens and yards. If you are one of the distraught gardeners wishing you didn't have this flower, and not wanting to impose its spread on the rest of the neighborhood, late winter is the time to deal with it.
Other posts on this subject can be found on this website by typing "celandine" into the search box. A post called "Will the real lesser celandine please stand up--a confusion of yellows" helps with identification.
Though I'm no fan of herbicide, that tends to be the only workable option in the majority of cases. I'm no expert on herbicides, but have been told that for lawns, a broadleaf herbicide like Weed Be Gone is effective. For flower beds, a 2% formulation of glyphosate (Roundup or equivalent) works well. Monsanto doesn't hold the patent any longer on glyphosate, so it's possible to buy if from other companies on the internet. I use a wetland-safe formulation, but for most yards, away from wetlands, some spot spraying with Roundup or equivalent should be okay. The plant itself is poisonous to wildlife.
There have been other proposed means of killing the plant:
Mulch
If you blanket the whole infestation thoroughly with mulch, e.g. a layer of cardboard covered leaves or hay or woodchips, it might kill the lesser celandine if you mulch as soon as the plants leaf out in late winter. Chances are, you won't cover it soon enough, or you'll miss some spots, and the lesser celandine will benefit next year from the fertilizer in the mulch.
Vinegar/salts/detergent
This concoction has shown up on the internet: 1 gal white vinegar, 2 cups Epsom salts, 1/4 cup Dawn dishwashing detergent in a hand held 2 gal pump sprayer. Spray in bright sun on a windless day.
But I couldn't find evidence that it has been carefully tested, nor that it would kill the roots. If the roots survive, the plant will be back next year. The concoction contains an acid, and the salts are made of magnesium and sulphates. These may or may not be harmful to the soil if used to excess.
Posted by Steve Hiltner at Sunday, February 26, 2017