The DR Canal State Park crew hasn't yet done its annual mowing of our little nature trail, next to the towpath just upstream of the Harrison Street bridge. That means we can do a little virtual February nature walk. (Summer tour at this link.) Some background info: The land here, bounded by the Washington Rd and Harrison Street bridges, the canal and Carnegie Lake, is owned by Princeton University but maintained by the DR Canal State Park. Back around 2006, having seen native wildflowers getting mowed down, I convinced them to shift from weekly to annual mowings of the areas away from the towpath. The annual mowings keep the meadows from growing up with trees. They then created this nature loop through the open woodland with sunny patches of wildflowers and views of Carnegie Lake. 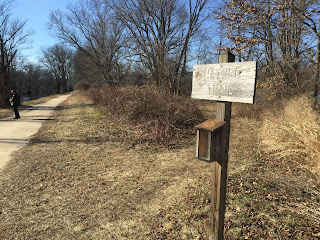 It starts with a nice sign and box for pamphlets that I need to refill. 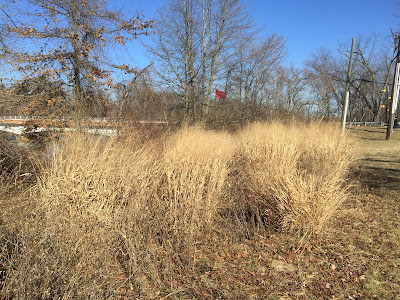 On your right is a stand of switch grass--one of the grasses of midwestern and plain state prairies that also grows in the east. Switch grass is one of the native grasses that grows erect enough to fit in as an ornamental in people's gardens. It got its two seconds of fame in a president's 2006 State of the Union address, as a potential source of ethanol. 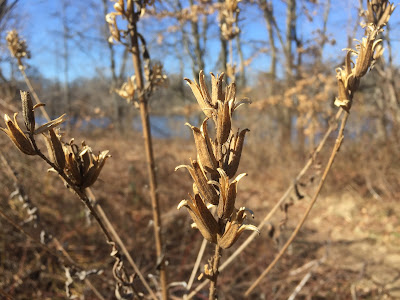 Left of the path are the remains of an evening primrose's seedheads, held high. 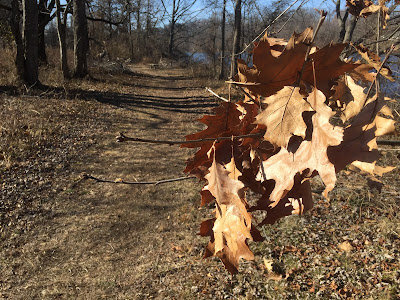 A short way down the trail is a cluster of red oak leaves. Follow the branch back to the trunk of the tree, 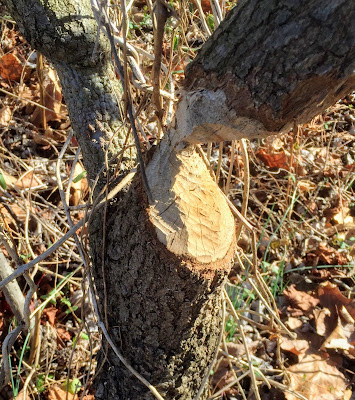 and you can see that the beavers have been busy. 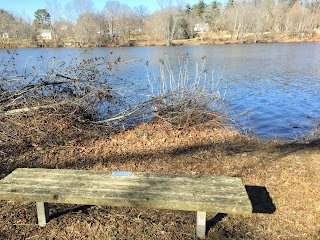 A little farther is a bench looking north across Lake Carnegie. 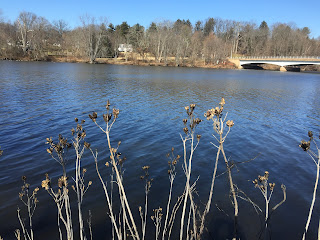 A closer look at what's growing there along the shore shows the remains of last summers native hibiscus blooms (Hibiscus moscheutos). Kayakers heading upstream on the Millstone River from Carnegie Lake in midsummer will encounter this showy wildflower lining the banks in some sections, its feet in the water. 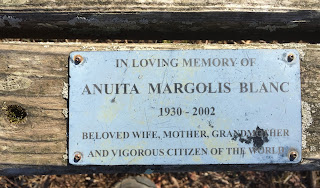 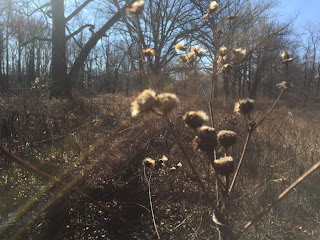 Here and there you'll see the seedheads of ironweed, a tall reddish native floodplain wildflower that blooms in later summer. 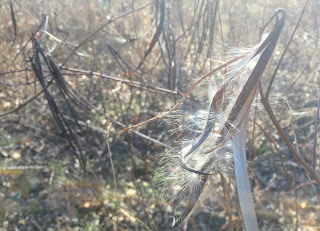 Also on the left are some clones of Indian hemp, related to milkweed. 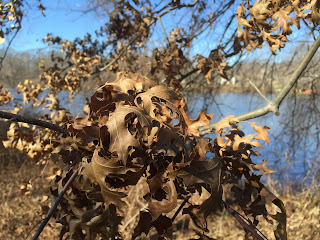 Pin oak has narrower, more deeply lobed leaves than red oak. There are lots of different oaks along the pathway, including a bur oak, which is more of a midwestern species--evidence that at one point the university planted this area to ornament the entry into campus from Route 1. 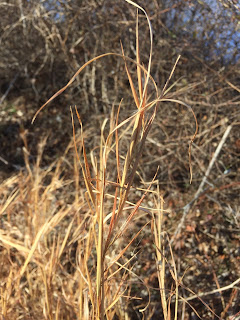 Broomsedge, actually a bluestem grass, grows along the right edge of the trail. A field of broomsedge can be a beautiful sight in winter, except to farmers who view its presence as evidence of poor soil. 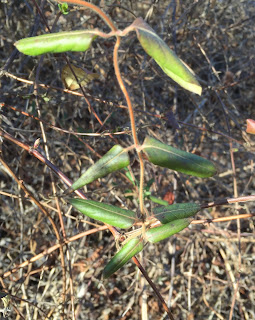 You'll see lots of this--Japanese honeysuckle. Though it's one of the first invasive species I learned about, it cannot compete with the smothering power of porcelainberry, which is now dominating farther down the trail in sunnier areas. 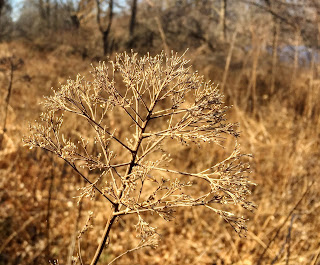 Where the trail turns left and heads towards the towpath before bending back around, there are expanding groupings of Joe-Pye-Weed--one of the native summer wildflowers that has responded well to the annual mowing management. 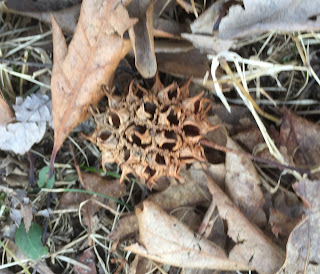 Look on the ground around there and you're likely to see a "gum ball"--the many-capsuled fruit of the sweetgum tree. 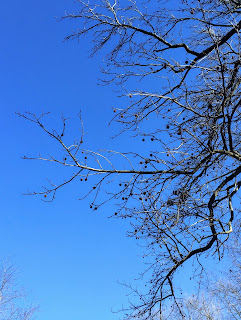 Look up and you'll see many of the gum balls still on the tree. 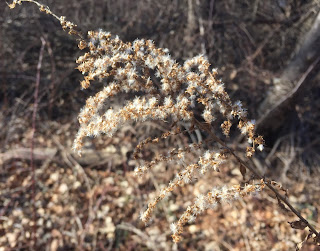 Goldenrods are thriving. The floodplain species of goldenrod tend to spread underground via rhizomes and tend to dominate over time. 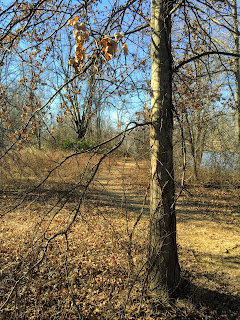 Some trees are "self pruning", but pin oaks tend to hold their lower branches, which bend down in a characteristic way. 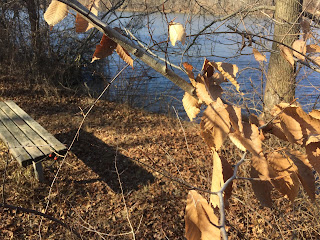 Beech trees are related to oaks, and show the similar habit of holding onto their leaves far into winter. 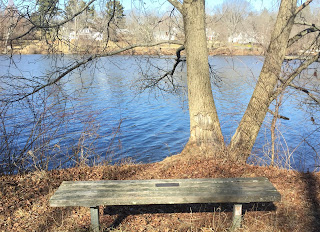 Beyond this bench is a tree that's lost some of its lower bark. 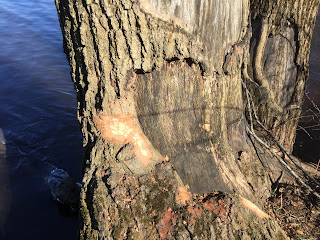 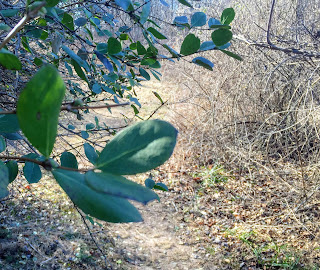 Here's one of the shrubs left over from the 1960s era plantings by the university--a row of fragrant honeysuckle that sometimes gets on lists of invasive species, though I've never seen it spread. It has small but very fragrant white flowers in late winter. Lonicera fragrantissima is the latin name. 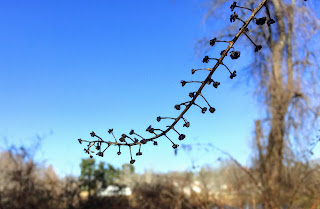 The remains of a pokeweed bloom.

That gets you about halfway down the path. It circles back over to the towpath. The Delaware and Raritan Canal State Park has programming during the year.