Porcelainberry: the Vine that Ate Princeton 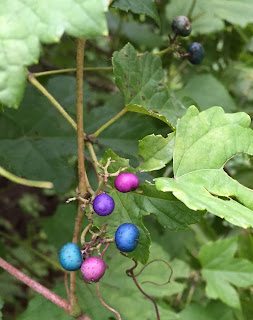 Here it's Friday of National Invasive Species Awareness Week, and nary a post about invasive species!

First, readers should be aware that there are contrarians out there, writing books, articles and opeds, trying to deny that invasive species are a big problem. It's fascinating to analyze their mental gymnastics and deceptions, which are similar to those used to deny the reality and danger of climate change. I've picked apart their faulty logic in posts that can be found at this link.

Now, on to our porcelainberry tour of Princeton. You won't find it in shady areas, where other invasives like stiltgrass, garlic mustard and winged euonymus thrive. Rather, porcelainberry threatens to smother all of those sunny openings and edges that shade-intolerant plants depend on for survival. Porcelainberry is related to our wild grape, but much more aggressive. Your first impression will be, "What lovely multicolored berries!" 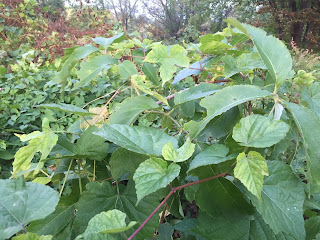 Your second impression, as it climbs up the stems of your shrubs, like this elderberry, might be, "Oh, a little rambunctious, but those berries are so pretty!" 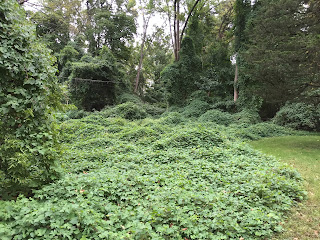 Your third impression, as it turns your yard or park into a monocultural topiary, will be more along the lines of, "OMG! HELP!" No, this is not kudzu growing along a freeway down south. This is porcelainberry winning a modern day Battle of Princeton, with stealth and persistence far beyond anything we distracted humans might muster. 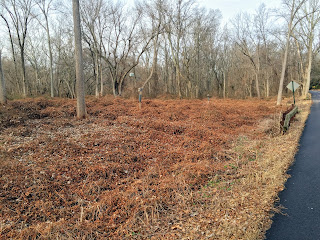 This is what a nearby patch looks like in December, just down the road from the Princeton Battlefield, along Quaker Rd between Mercer and 206. Invasive vines and shrubs can seem less overwhelming in winter, which is actually a good time to remove them. In spring and summer, though, all that growth energy can be intimidating. 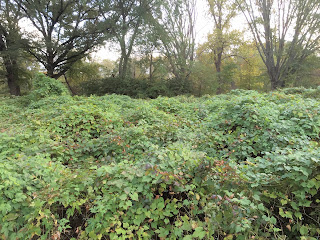 And this is what porcelainberry is doing to the sunnier portions of our lovely nature trail off the DR Canal Towpath near Harrison Street. The blackbirds may say hello to the berries, but it's bye bye to the diversity of native wildflowers underneath that foliar blanket. 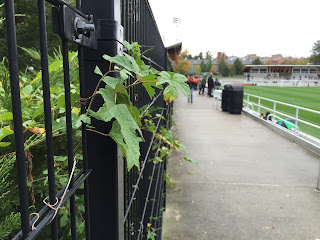 Turns out porcelainberry's a soccer fan. Here it is in the cheap seats at Princeton University's Roberts Stadium, at one end of the field, 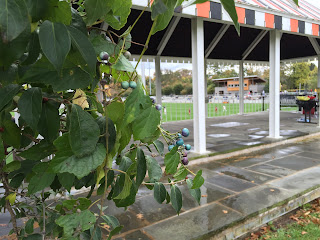 and at the other. 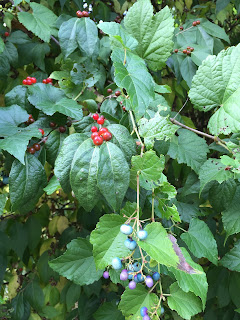 Here it is (light blue and pink berries) in that "second impression" stage, climbing over a honeysuckle shrub (red berries) at Quarry Park. Give it a few years and it may reach the "OMG" stage.

I haven't seen much of it in eastern Princeton yet, but we'd be smart to keep an eye out and remove it before the berries mature. 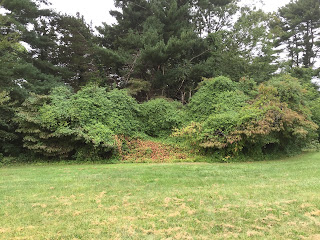 Otherwise, sunny edges everywhere will look like these hapless flowering dogwoods, planted at Princeton Battlefield in 1976 for the nation's bicentenial, and now struggling to survive beneath a spreading blanket of porcelainberry.

Note: You can help liberate the dogwoods from the porcelainberry and other vines on Saturday, April 1 at 1pm. I've been collaborating with the Princeton Battlefield Society on invasive species work for the past several years, and will be leading a group to preserve the dogwoods that line the field on the north side of Mercer Street.

Another group of volunteers will be continuing the multi-year effort to reduce the bamboo clones near the Clark House, which we're actually having considerable success without herbicide. 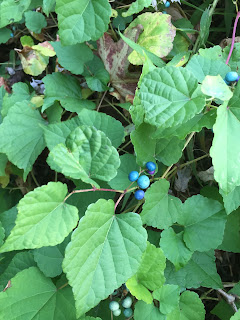 For purposes of identification, here are a couple closeups of porcelainberry. The berries are distinctive, with different shades of blue, red and white. 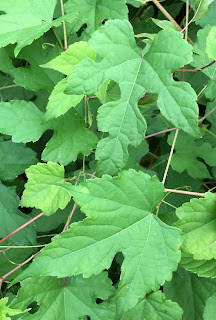 The leaves are easily confused with wild grape. This photo shows how variable is the shape.

I hope everyone's having a happy National Invasive Species Awareness Week. We'll end with a short Q and A: