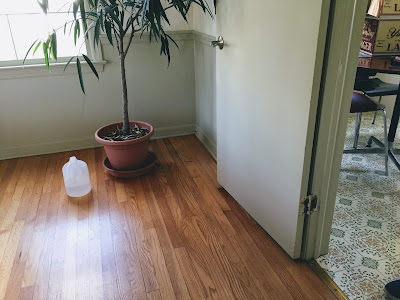 The mystery of the winter ant infestation, which inspired last month's mini-essay "Did U Put the Ant in Cantaloupe?", has been solved. Their source discovered, a solution, adhering to the necessities of plot, was found, then lost, then found again.

It finally occurred to me, after days of coping with the wide ranging perambulations of odorous house ants in our kitchen, to track them back to their source. Surprisingly, or not, once one thinks about it, their two lane baseboard thoroughfare wound around the corner and over to a potted plant, specifically one that is put out on the patio during the summer. The ants had hitchhiked in with the plant, remained dormant through the winter, then responded to unknown cues to venture forth in February. 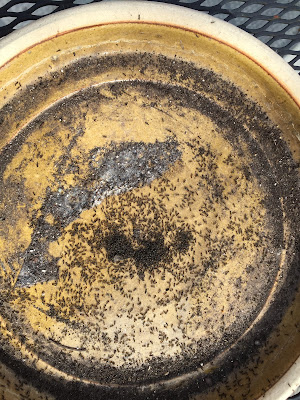 In a moment of brilliant insight, albeit delayed by at least a week from the first discovery of the ants in the kitchen, I determined that by filling the drain pan underneath the pot, I could create a moat that would render the ants pot-bound, as if in a medieval castle under siege, until their late spring return to the patio. Not completely trusting the pan to be waterproof, I substituted another, and in the process found a dense cluster of ants underneath the pot. 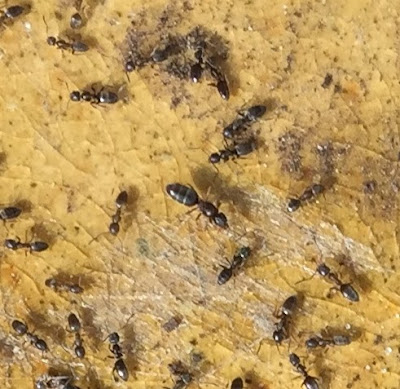 A closer look showed there to be several larger ants mixed in, supposed the queens. 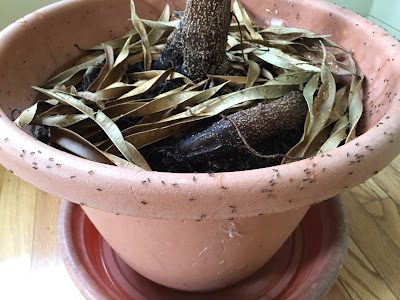 Watering the plant stirred up hundreds of soil dwellers--a population that had burgeoned on the rich harvest of breadcrumbs, cantaloupe juice, and whatever else lingered for a few hours up in the distant highlands of the kitchen counter. 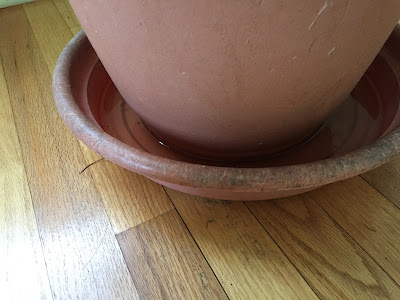 But the moat in the drain pan did it's job, and over the course of a few days the ants in the kitchen dwindled to a few homeless stragglers, then disappeared altogether. 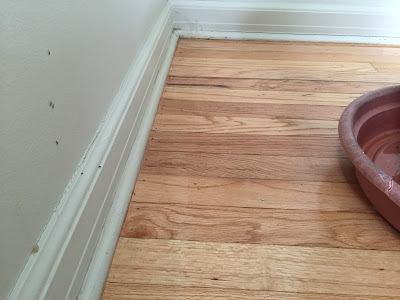 With the counter free and clear, I had about a week to congratulate myself on my non-toxic solution before the ants showed up once again in the kitchen. I checked the moat. Water was still in place. What was going on? The 2-lane baseboard freeway was again busy with ants. This time, it led not back to the drain pan, but up the wall,

up the window frame, 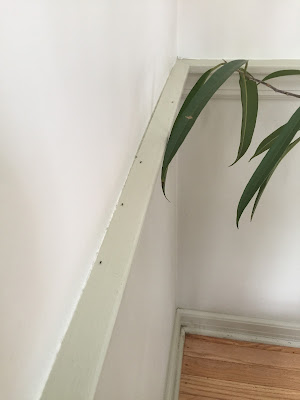 then over along some trim to ... a leaf that was touching the wall! Someone, perhaps when company was expected, had pushed the plant back against the wall, and the ever curious, free-ranging ants had found a bridge from their medieval castle to a 21st century rich in unwiped kitchen counters.

For awhile after the plant was pulled away from the wall, the ants clustered at either end of the new divide, processing in some collective fashion the change from "Yes we can" to "No we can't". Within a day, however, the ants--far faster studies than we humans--had figured out that someone or some thing was determined to maintain division and confine them to medieval ways. For now, they'll have to live with whatever memories they might hold of last summer's patio.
Posted by Steve Hiltner at Wednesday, March 15, 2017