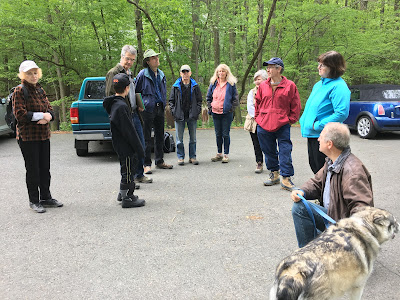 Thanks to Nicole Bergman for most of these photos of a walk at Princeton's Herrontown Woods this past Sunday. The Friends of Herrontown Woods, which I proudly lead, has for the past four years been living up to the expectations stated by the Veblens when they donated this first nature preserve to Mercer County in 1957. The deed calls for "the maintenance of a park, wildlife, and plant sanctuary", and "the stimulation and development of public appreciation of the values of wildlife and plants." Though these are maintenance and education responsibilities the county took on when it accepted this unprecedented gift, we have been doing the work gladly as an expression of civic spirit and love for the charms of this preserve--its intact ecology and fascinating history.

Many of those who came on the walk wanted to hear the latest on our initiative to extend our stewardship to the Veblen House, cottage, barn, corncrib and garage, which also were gifted to the county for public use. The Veblen will states that the house is intended to be a "museum and a library of Herrontown Wood". As with care of the preserve, our nonprofit is ready to fill the void in building stewardship as well, and insure that the buildings continue to be safe and meaningful landmarks in the landscape. With community support, which has already been considerable, we aim to make the Veblen House useful as interior space--a much-needed gathering place in eastern Princeton.

The county's rejection thus far of this initiative, and its frightening move towards demolition, has been surprising in its dismissiveness. For whatever reason, the county chose long ago to put its resources elsewhere than Herrontown Woods. One would think that the organization that filled the resulting void in stewardship, without any government support, would be due respect and gratitude. It's one thing to give short shrift to the expectations stated in will and deed, but another to aggressively oppose those who, in the county's absence, want to realize the Veblens' vision. 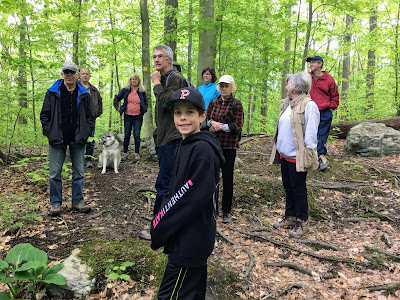 The first part of the walk was led by Nicole and Jeff Bergman's son, Jensen, who for a public service project has been helping us build a short loop trail next to the parking lot. We had been thinking of building the trail, but it was the Bergmans' infusion of energy and interest that catalyzed action. Jensen explained that the trail will be a miniature "intro to Herrontown Woods", with plant identification aids, and descriptions of the various habitats the trail moves through. He then showed us the tadpoles and other creatures living in a couple vernal pools near the trailhead. 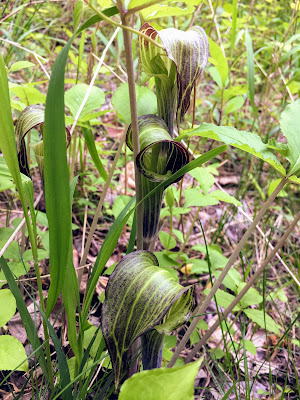 Farther into the preserve, we encountered Jack in the Pulpits, 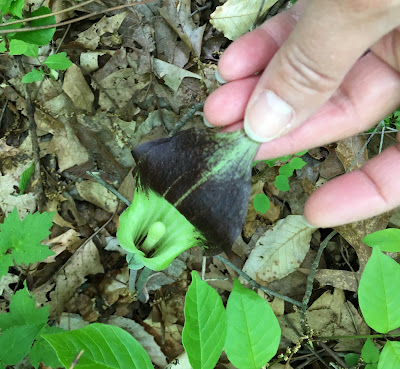 Jack being the spadix under the hood or "pulpit". You may remember seeing a spadix in the Peace lily, a popular house plant that's also in the Araceae family. 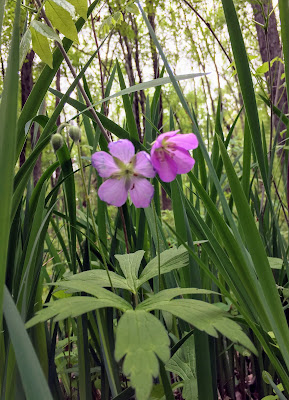 Wild geranium. Not sure what the linear leaves are that surround it, but they meld nicely into the trunks of trees in the background. 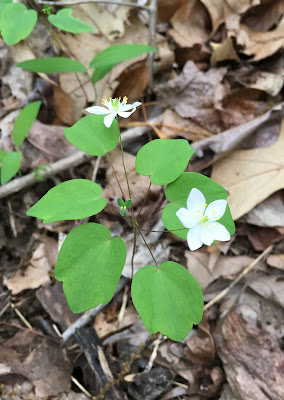 Rue anemone, although it may be more fun to say its scientific name, Thalictrum thalictroides. 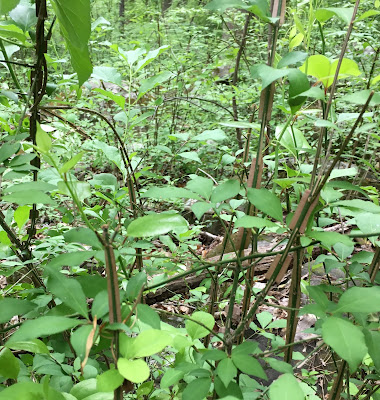 If you look closely, you'll see the wings on the stems of this winged euonymus, and also a spot where the deer have been browsing the new growth. Winged euonymus, a nonnative species common in landscaping as "burning bush", has taken over whole hillsides at Herrontown Woods. Like many species that evolved in other climates on other continents, it leafs out early in the spring, casting shade on spring ephemeral wildflowers that need the sunlight to recharge their roots for the next year. Because the deer and insects don't eat the foliage, we've stepped in to serve the role of herbivores, cutting the shrubs down to restore some balance to the forest. Fortunately, the deer have been helping to some extent by eating the fresh resprouts, which perhaps lack the toxins that discourage browsing of older tissue. 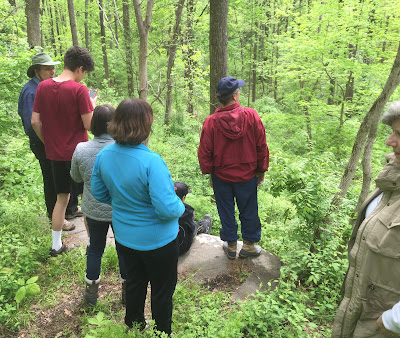 We stopped by the cliff to bask in the vista, 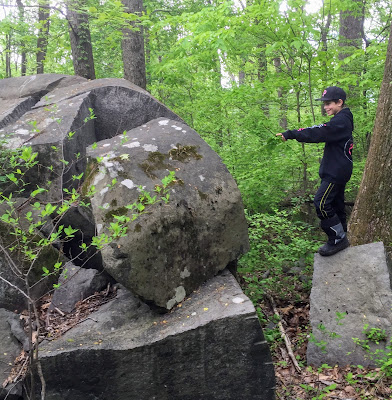 then headed to the quarry area. Jensen, demonstrating some mountain goat climbing agility, pointed to a section of diabase boulder ("trap rock") that long ago had been quarried but then left behind. If you click on the photo to see a larger version, you can see the marks along the edge of the main boulder where they hammered in pegs to cleave the rock. 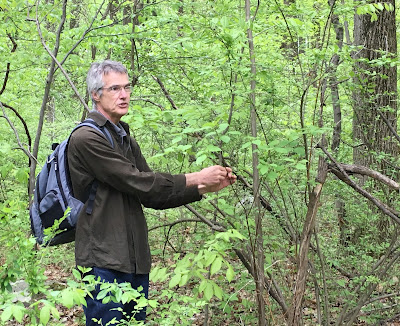 That's yours truly showing everyone an alternate-leaved dogwood, of which only two are known to exist in the park. The more common Flowering Dogwood has opposite branching. The rarity of the alternate-leaved dogwood may have to do with its susceptibility to golden canker, which particularly infects drought-stressed trees. Perhaps these two specimens have held on due to favorable hydrology where they grow.

We then headed over to Veblen House, which serves as a landmark to head towards and gather next to for refreshments and socializing. It's common to think of buildings as useless unless they are made habitable, but we view the Veblen buildings as an inspiring and enchanting presence, useful even now, in their unrepaired state. Four out of five are all already safe and stable. The notion that one has to spend $600,000 to make these buildings useful, as alleged in a recent frontpage Town Topics article on the buildings, has no basis in the realities we've come to know and love through our years of service to the public and the Veblen legacy at Herrontown Woods.

Note: Thanks to the Bergmans for their help, and the photos in this post. Another nature walk the day before at Herrontown Woods is written up at the FOHW.org site.