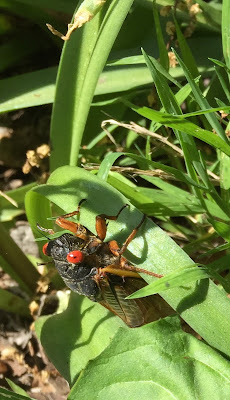 This past week, as hot weather warmed the ground, cicadas emerged in their clown-like skins, with red eyes instead of red noses. Nature sightings can come in a moment of leisure, and this one came while sitting for a few minutes on the front step Friday afternoon. A few yards away, an adult cicada was crossing the stone walk, as determined as it was awkward, each tiny stick or leaf fragment presenting a formidable obstruction to progress for its bulky body. When it reached the garden bed, it clambered in and around the leaves, finally choosing a spent flower stalk as substrate for its vertical ambitions. With clumsy zeal, it climbed the narrow, flagpole-like flower stalk of a wood hyacinth. As it approached the top, the stem bent, so that by the time it reached the tip, the tip had tipped over and was no longer the top. The cicada, knowing up from down and desiring up above all, turned around and headed back up what moments before had been down. Relieved of the cicada's weight, the tip then straightened back up, leaving the cicada once again below the top. This could have gone on for quite awhile, as if the cicada had been born into a slapstick movie from the Buster Keaton/Charlie Chaplin era, with our frontyard serving as movie set. 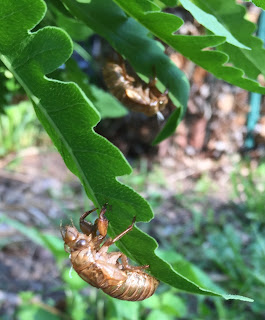 Numerous on the leaves of the nearby frontyard raingarden were the spent skins from which the adults had emerged overnight. It's a beautiful transformation if you ever chance upon it.

Not being an entomologist, I can attest only to what I've read, that since these are emerging in spring, they must be the periodical cicadas--those that appear every 13 or 17 years en masse--a phenomenon unique to eastern North America. Annual cicadas, by contrast, emerge in summer and are found worldwide. 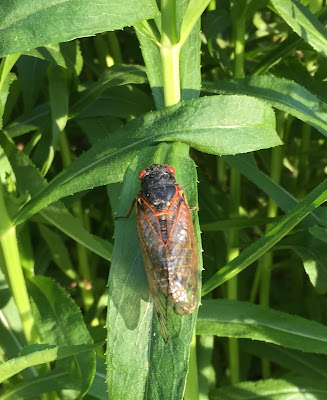 Perhaps the cicada, so intent on climbing, was seeking a good perch to sun itself, the better to harden its exoskeleton over the next few days.

We'll see if all this clambering gives rise to a great clamor in coming weeks.


Past posts on the subject can be found by typing "cicada" into the search box. Here are a few:

Cicadas "Clean up real good"
Cicada killers living peacefully among us
Struggle for Survival--Scene 1
Posted by Steve Hiltner at Sunday, May 21, 2017