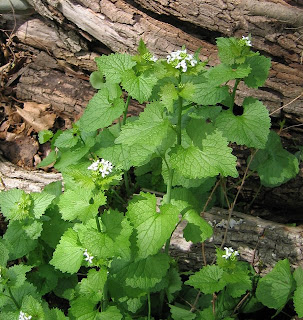 Back in the 1980s, while I was accumulating credits for a masters degree in water quality at the University of Michigan, I did some academic moonlighting and took an "expository writing" course taught by Alyce Depree. She had us adopt pseudonyms (mine was Snupulus Lupulus), fed us a steady diet of George Orwell, and had us write and rewrite 2-page essays. It was a wonderful, validating experience.

Last summer, heading back to Michigan to play a jazz festival, I reconnected with her. Out of the blue, she told me the inspiring story of her long but successful battle with garlic mustard--an introduced species that has displaced trilliums and other native wildflowers in the woodlands where she lives in Holland, Michigan. She later wrote up an account of her experience.

I'm posting this when just a few blooms remain, but you should still be able to find it growing along the fringes of your yard, or in a woodland nearby. Perhaps you'll be moved to action, in your yard and beyond, as Alyce was many years ago, with heartening results.

Hi, Steve...You've caused quite a chuckle here this morning...so few people for so long cared about what was occurring in their woods on the west side of the state that my cousin and I spent almost as much time encouraging ourselves not to give up as we did actually picking! The tables have turned (mixed metaphor), however...now in the spring the local churches (of which there are many) organize their congregants and Sunday school kids to go over various ground areas and parks in the Holland area...that is making quite a difference.

In my cottage area along the lake, and my cousins', we noticed sixteen years ago that our lovely banks of trillium in the woods simply no longer appeared in springtime. What we had instead was this aggressive leafy plant with cute little white blooms that grew higher and higher during the spring until, by June or so, could be four feet tall and going to seed...it almost looked like phlox, except that the blooms were single, not developed into bunches or clumps. So we did some research, and discovered what it was called and how it was edible (yuck) and that our venerated forefathers had brought it with them from England, mostly, as it would give them something green...and last and last and last. Which it does. It's a two-cycle plant; first year establishes the root, second year establishes and spreads (by "popping" out) the seeds every time wind or an animal comes in contact to move the branches. Each mature second-stage plant can have hundreds to a thousand seeds. It is generally the first plant to begin showing after winter...spreading out quite quickly with many leaves that cut off the sunlight from surrounding and still dormant plants or seeds. Additionally, the root...which resembles a skinny parsnip...exudes a poisonous substance which makes the soil unfriendly to wildflower growth in general AND also strips the protective coating off tree roots...so soil diseases can then attack the trees.

We found that, while people can be casual about wildflowers, they aren't casual about their trees; however, they are "terribly busy." Anyway, my cousin and I decided we'd rid ourselves and the immediate area of garlic-mustard. We figured we could do a five or six property area...talked and talked with the owners but didn't really convince them, so then took on the job ourselves. After experimenting with RoundUP and discovering not even that would kill the plants, and learning from internet that the state of Wisconsin had been trying to get rid of them with no luck, we began with local college kids, paid them $12 per hour, lunch, and snacks, and then joined them ourselves, pulling and digging (you have to get the root!) for about ten days. We filled hundreds of 30-gallon black plastic bags with the ill-smelling plants, let the contents rot for a month, and then gradually put them out for garbage pickup.

We picked and pulled the five properties for the next ten or so years..."harvest" getting less and less (the seeds last 5 years in the ground)...one owner gets his own grandchildren to pick their woods now...we continue to work four properties and now only get about 15 bags, max. We figure we're down to just maintenance now plus some plants from seeds borne by the winds. The past three years we have not hired anyone to help...just do it ourselves and are glad for the exercise. The trillium is back and glorious. Also a wild yellow ground lily and jack-in-the-pulpits. Amazing how sixteen years flies by....and no chemicals, too.

Photo below: Garlic mustard extending into the woodland below Quarry Park in Princeton. 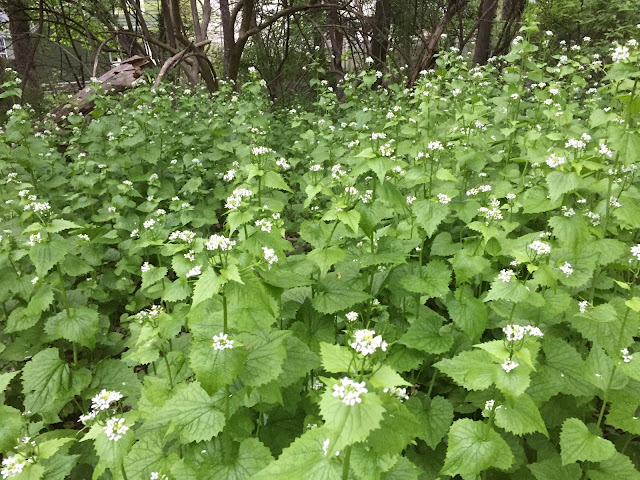