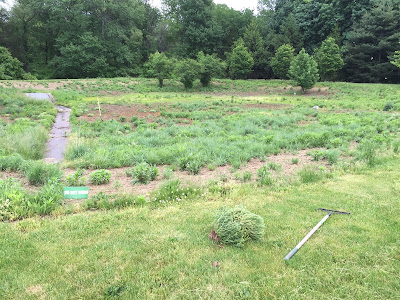 Here's a garden for you. Let's call it an acre, plopped down in the middle of a broad expanse of ballfields at Smoyer Park. This, too, was mowed turf until last year, when Partners for Fish and Wildlife, partnering with the town of Princeton and the Friends of Herrontown Woods, converted it to a native wet meadow.

Normally, these conversions, if they can be said to be normal at all (given that the vast majority of detention basins in New Jersey are curiously barren depressions in the landscape, a sort of make-work program for mowing crews) would involve a plant-and-run approach. The turf would be killed and disked, the native grass and wildflowers scattered, followed by a couple years of wait and see.

In my experience, though, the first two years are defining, a time when attention should be paid, lest the weeds gain the upper hand. The power of aggressive, mostly nonnative weeds to invade can be seen in countless backyard gardens and utility right of ways taken over by the likes of mugwort, canada thistle, crown vetch, and a host of others. The seeding of the basin came in spotty, leaving expanses of bare dirt. What fills that void determines the botanical fate of this wet meadow. There's gardening to be done here, wild gardening, like backyard gardening but on a grander scale. 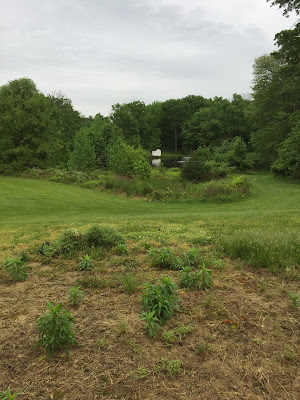 Can it be said that delinquent landscapes, like delinquent children, are saved only by a finer vision of what they might be? That vision may be weak within the child or landscape, but if it resides as well in someone who cares, as a kind of empathy, its transformative power can in time take wing. Thoughts like this bring back vague memories of a book by Eric Fromm.

(Note: retired librarian and Smoyer Park neighbor, Jan Johnson, helped me find the quote, from Fromm's book Escape From Freedom: “The more the drive toward life is thwarted, the stronger is the drive toward destruction; the more life is realized, the less is the strength of destructiveness. Destructiveness is the outcome of unlived life.” )
For the detention basin, that vision is fed by all the marshes and swamps and swales I've ever seen, one of which lies just down the hill from the basin. 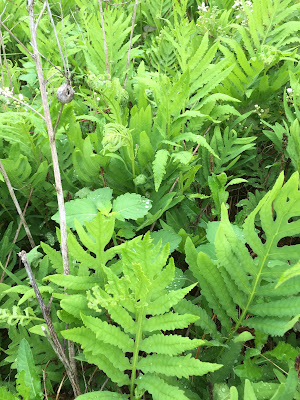 There, sensitive fern and jewelweed flourish on seepage at the toe of the slope. 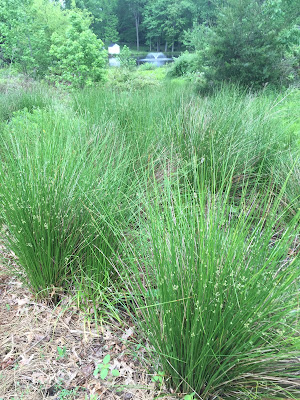 Soft rush shows off its vase-like, evergreen form. Abetted by favorable hydrology, these grow on their own. The same can be wished for the basin, that early intervention can lead to self-sufficiency. This is the philosophy of schools, but such followup with landscape plantings is considered impractical. The planting is funded. The followup is not. 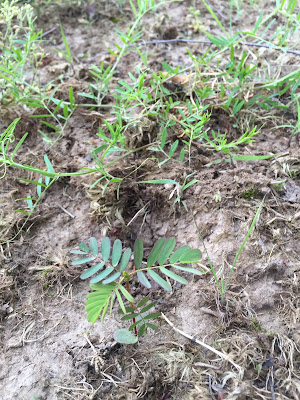 Back in the basin, two legumes sprout. In the foreground is partridge pea--a delayed sprouting from the original seed mix. It stays where it's planted. In the background, crown vetch, an aggressive nonnative that would spread and grow over the intended species. 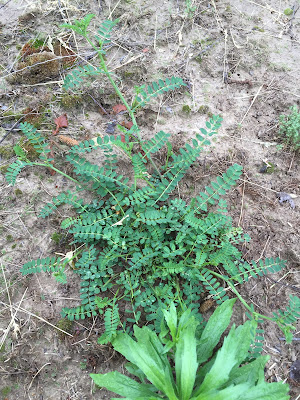 Here's another crown vetch. What a pleasure it is to be able to weed it out in this early stage, before it becomes a tangle of despair. 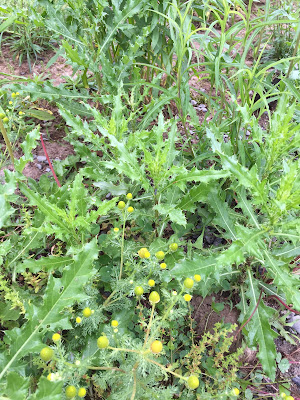 Here's Canada thistle, identified and removed in its early stage, before it could spread and overwhelm the intended species, 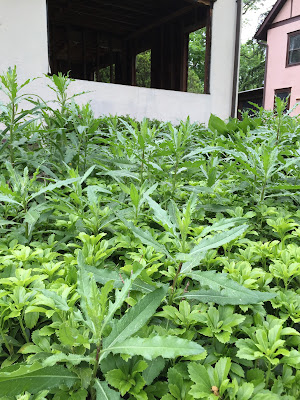 as it has in so many places in town. In this garden, for example, in the Jugtown district of Princeton, the frontyard garden got invaded by Canada thistle, and the next thing you know, the house has been entirely gutted. Cause and effect? Never underestimate the power of a weed. 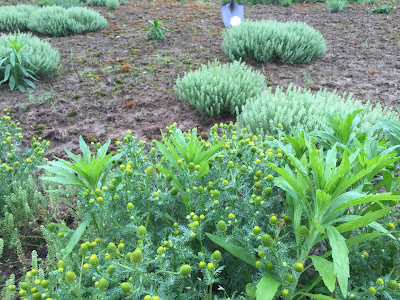 Other weeds in the basin may or may not pose a threat of longterm dominance. There's the fragrant Pineappleweed, rare in Princeton and perhaps a hitchhiker in the seed mix. And a plant that makes discreet, silver green pincushion shapes, more reminiscent of a desert landscape.

Along with the weeding, seeds of local native floodplain wildflowers have been raked into the bare ground, and some softrush, sensitive fern, rose mallow hibiscus, buttonbush, and cutleaf coneflower added. Some of these were later found pulled out, perhaps by the deer, to which I responded by replanting them close to other plants that might better disguise them.

Even with the deer causing some setbacks, wild gardening at this stage is satisfying, requiring relatively little work to achieve considerable longterm effect. People passing by, out for an evening walk or headed to their plot over at the community garden nearby, stop and show an interest. Some even offer to help. The peacefulness of the park, the light work amidst leisure, the green all around and big sky above, all this is good for the soul.

Informed followup is a given in most fields of care for living things, but somehow native plantings in public spaces have been expected to fend for themselves. We'll see how this interplay of living thing and vision plays out.
Posted by Steve Hiltner at Thursday, May 25, 2017