If you asked me what a utopian landscape might look like, it would be something like this. People talk more of dystopia than utopia these days, but this enclave stirred memories of utopian dreamers who were more common a half century ago. This is not a utopia filled with fantastical gizmology, but a more basic collecting of solar energy by plants and people to fill our needs for comfort, food and beauty. Though a deep forest would be somewhere nearby, houses would be producers, not just consumers, their roofs shaded by solar panels sending renewable electrons out into the neighborhood grid. And their front yards would be producers as well, of a joyous mix of wildflowers and vegetables. 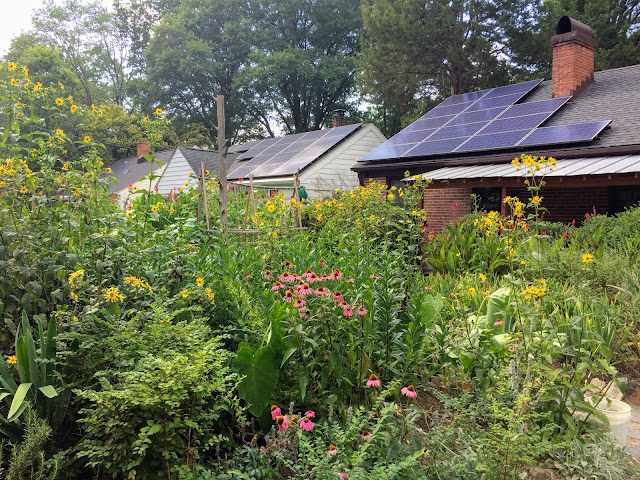 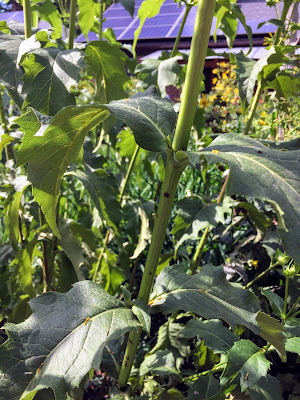 Wild plants would mingle with domestic, and people would be a gentle mix of wild and domesticated natures as well. On this particular day, a neighbor was harvesting cucumbers and tomatoes while we plant lovers were inspecting the leaves of a curious plant grown from seeds we had collected from a wild remnant on the outskirts of town. We continue to be stumped. It's some sort of Silphium, not quite cup plant, not quite rosinweed. Genius nature has taken our breath and turned its carbon into yet another surprise.

The garden is largely the work of my friend Perry in Durham, NC, who began gardening in his own yard, then extended his work into his grateful neighbor's. Other neighbors on the block have picked up on the theme, getting acquainted with plants one at a time, until their lawns too have been displaced by something much more interesting and productive. It's a miniature experiment in proliferating paradise.

Perhaps paradise is too strong a word, being associated more with leisure than production, more with a tropical beach and soft sea breezes than an urban front yard. This is a plant-based, pandemic-borne, home-centered paradise. 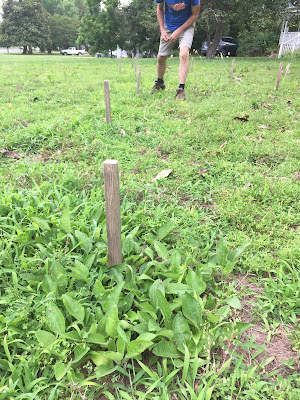 I'm in Durham partly to see a close friend, but also to work on my house there, a 1919 house surrounded by towering oaks, but with a big lawn drenched with sunlight and potential to grow all kinds of interesting things. Being a long-distance gardener is even more challenging than being a long-distance landlord, particularly during a pandemic, but last fall, we started by planting seeds of local wildflowers and grasses around stakes in a part of the lawn where the soil had been freed of Bermuda grass. Perry didn't get my hopes up, sending periodic reports this spring of copious amounts of chickweed and weedy cranesbill filling the void in the lawn. It was a great surprise then to finally show up and find an enthusiastic crowd of intended plants around each stake, enough to populate a much larger portion of the lawn. 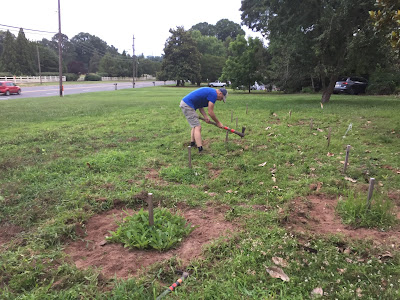 This is an unorthodox way of proliferating prairie. I used a similar technique at the botanical garden at Herrontown Woods in Princeton, where toddlers and their moms planted wildflowers in staked pods like this--mini-nurseries of clustered plants that were transplanted the next year to begin filling the whole forest opening. As the transplants produce seeds, they expand the overall planting still further. 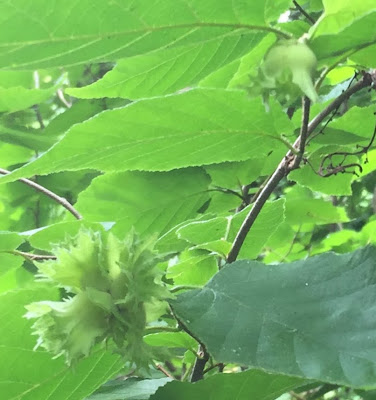 Perry's been using incrementalism in a Durham nature preserve as well. At 17 Acre Wood, the first urban preserve I helped create in Durham 20 years ago, Perry and I checked out the hazelnut crop in a floodplain he has been working to shift towards native species. 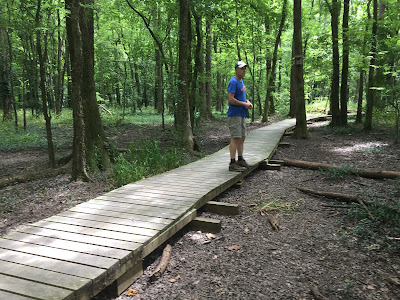 One of the toughest spots was clogged with climbing euonymus, english ivy and periwinkle. Trees tend to be native, the understory not, but Perry is shifting the balance. It's hard to grow much in deep shade where water stands for much of the winter, but where the invasives have been removed, elderberry and jewelweed have bounced back, and a patch of lizard's tail has appeared. 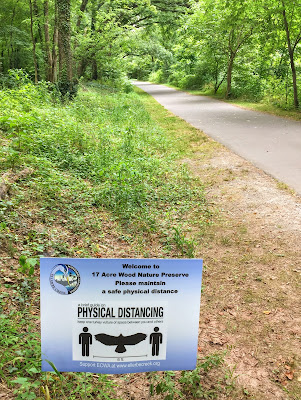 The work is partly ecological, partly aesthetic, partly public safety, since removing invasive shrubs and vines improves vistas and sightlines along a public trail. This West Ellerbe Creek Trail, which follows the creek through the preserve, is also a story of incrementalism. It was a big hit with neighbors when it was built by the city in 2001, but would not have been built at all if not for the small steps that preceded it. A county government grant had helped our nonprofit create a nature preserve along the creek. Then the city, seeing we had created a destination, built the creekside bikepath to reach it. The result was a way for neighbors to take a nature walk in their own urban neighborhood.

To shift the world towards paradise, we really don't need new ideas, only people and organizations and governments doing what they each do best, combining incremental action with caring about the world and what we'll pass to future generations.