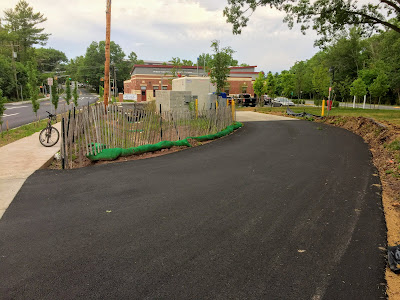 Why would a plant lover be drawn to this desolate scene of concrete and asphalt? Because there's a raingarden behind that fence, or at least a raingarden wannabe, and that means I'm seeing not what is, which is pretty drab, but what could be, which is a dynamic, jubilant planting of native wildflowers, grasses and shrubs filling that skinny raingarden squeezed between the sidewalk and the town's fuel tank. The fuel tank was for awhile serving double duty, fueling town vehicles while its appearance fueled controversy in the neighborhood. A fine rain garden planting could go a long way towards healing the discontent, in my humble, totally plant-biased opinion.

The first good news is that the fresh layer of asphalt there appears to be appropriately tilted to shed its runoff towards the raingarden. What is a raingarden, after all, if the rain that falls on the surrounding topography doesn't flow towards it? 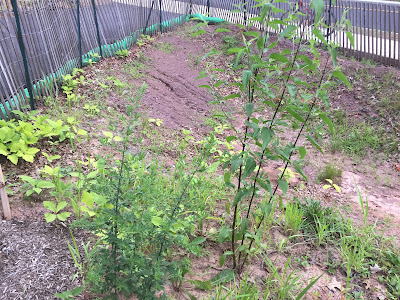 For some reason the raingarden hasn't been planted yet, so the plants have gone ahead and started planting themselves. It's looking a little sparse thus far. Or you could say that the plants are social distancing.

Whenever I see plants trying to colonize bare dirt, I think of people who live in an emotionally impoverished situation. Back when I was in that predicament, I was drawn to places like this. Weeds trying to grow in parched ground were my friends and fellow travelers. Maybe that's why I can remember plant names when most people struggle, because the plants aren't just variations on green. They touch something deeper in me. 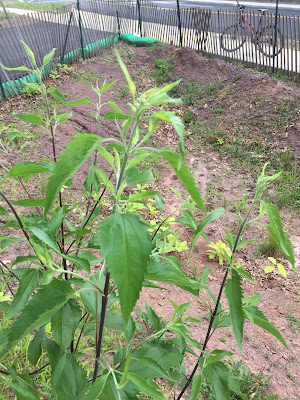 This late-flowering thoroughwort is a keeper--a native wildflower whose name is unlikely to flow smoothly from many tongues. It grows like a weed, and often in weedy places, like abandoned fields or roadsides, but can sometimes achieve great elegance of form when it becomes covered with plates of white flowers in late summer. It shows up early, but blooms late. Thus the name. 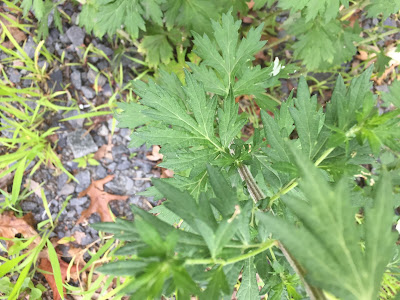 Here are the leaves of mugwort, which adds no color and spreads aggressively underground, taking over neglected raingardens over time. It's a force for monoculture and monotony that must be countered early and often. 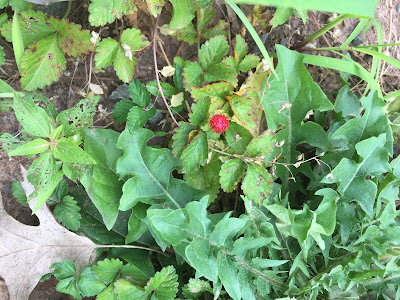 Smaller scale weeds are clustered here, close to the ground, with dandelion on the lower right, a mock strawberry in the middle, and one 3-seeded mercury on the left. When I see one or two mock strawberries like this, I'm also seeing five years hence when it will have spread to coat the ground in an unattractive and inedible way. That increases the motivation to be proactive and pull it out now, before the task becomes overwhelming. This ability to imagine the future, learned in a garden, is directly translatable to global issues like climate change, where the job only becomes harder the longer one waits. 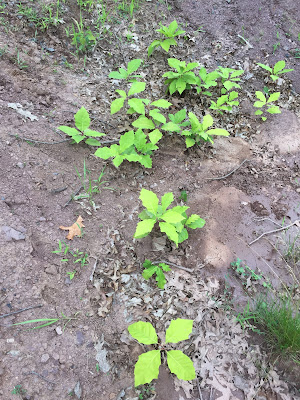 Lots of homeowners puzzle over what to do with hundreds of oak seedlings in their yards, when everyone is telling them we need to plant more trees. Most tree species don't need help. They plant themselves, often in inconvenient places, like this raingarden. 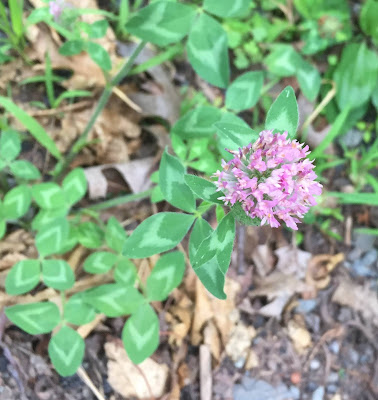 Playing the editor, I'd say this nonnative red clover is a keeper as well, but pull the tall sweet clover at the other end of the raingarden. Sweet clover can be kind of pretty in a gangly way, but it is one of those midwestern and western weeds that appear to be expanding eastward, like teasel, Queen Anne's Lace, knapweed, and wooly mullein. Having lived in the midwest, I've seen how they can start to take over. 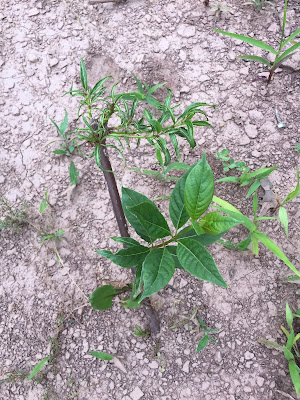 Leaping into the void in plants and action a couple months ago, I pushed some "live stakes" of buttonbush into the bottom of the raingarden. Despite the poor, hardened soil, they have sprouted. Here again, I'm seeing not so much the less than impressive seedling but instead the 8 foot high shrub it could become if it's allowed to get well established. 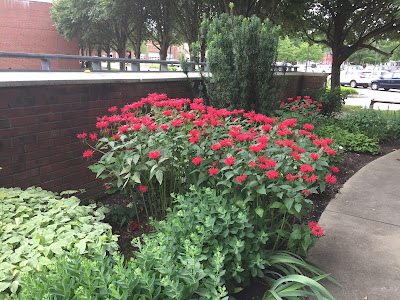 Just up Witherspoon Street, at the Princeton Recreation Dept. headquarters next to the community pool, is a demonstration of how gardens can look if there's someone knowledgeable taking care of them year after year. There's some serious tending going on here. Even the scarily aggressive variegated goutweed (whitish leaves on the left), which tends to take over gardens, is neatly contained in a discreet clump. These gardens owe their existence and beauty 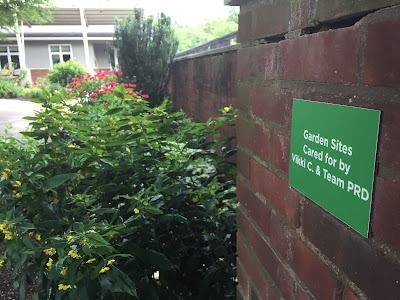 to Vikki, whose job description in the Recreation Department probably has nothing to do with plants. From what I've seen over the years, it's clear that Vikki is one of the few people in town who is hard-wired to have a soft spot for public gardening, like Polly Burlingham with her hanging baskets downtown, and the various school gardeners, and like Dorothy Mullen was until she left our world earlier this year. I'd say that all it takes is love, and from that all things follow--vision, knowledge, persistence, strategic timing.

Maybe the sad, forsaken raingarden wannabe just a block away will somehow become loved ground. It's got "good bones"--sun, inputs of moisture. Good things could happen.
Posted by Steve Hiltner at Wednesday, July 08, 2020