Feeding Raingardens: When Disconnection is a Good Thing 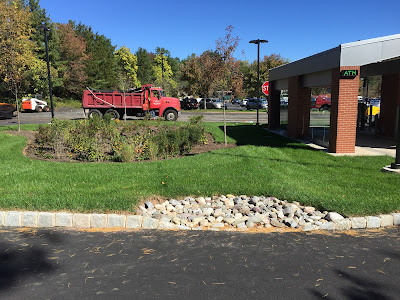 This post is about two different kinds of disconnection, one good, the other not so good. Now, every time I start saying what something is "about", I am stopped in my tracks by the memory of an english professor, Russell Fraser, who would say emphatically that a poem is not "about" any one thing, in that a good poem comes from a place so deep and works at so many levels that it's naive for the conscious mind to declare what the poem is actually about.

Take as a for instance this newly constructed raingarden behind the PNC's new bank at Princeton Shopping Center. Not exactly a poem, but what is it about? For the designer, who may not have even visited the site, it was about satisfying regulations, at least on paper--regulations that require that newly paved areas not add runoff to local streams. For the contractor, it was a matter of nominally following the design, installing the called for curbcuts and greenery, and being done with it.

At a deeper level, this raingarden demonstrates what happens when people are disconnected from the underlying meaning of their work. The whole idea here is to direct runoff into the raingarden, where the water can be filtered and seep into the ground, essentially "disconnecting" that portion of pavement from the matrix of stormsewer pipes that would otherwise send untreated runoff pouring directly into nearby Harry's Brook, adding to downstream flooding. Look closely, and you'll see how this good sort of disconnection was foiled by a lack of empathy for the basic processes of nature, one of which is that water flows downhill. The runoff can't reach the raingarden because the turf and stone around it are higher than the pavement.

At another level, then, this raingarden is about how a big investment in regulation, design and installation, well intended on its face, can come to nothing. 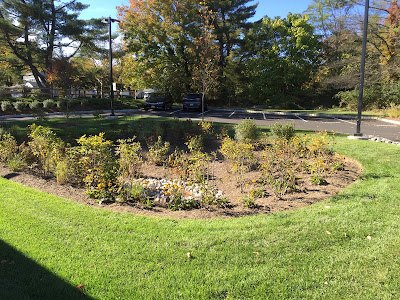 A bit shadowy here in the photo, but you can see the surprisingly small amount of pavement uphill of the raingarden. The plants really need what little runoff the pavement can provide. 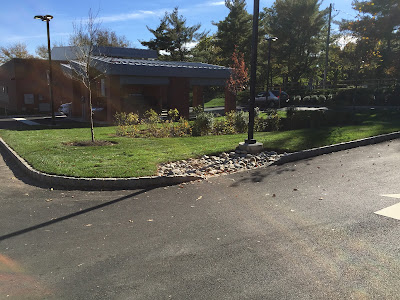 This second curbcut is the most obviously dysfunctional one. A visit during a rain will show runoff simply flowing past it, as if the curb had no cut at all. I suppose as parents we sometimes expect of kids what their nature does not allow, and this curbcut is expecting water to flow uphill. Not likely. It comes down to empathy for the physical world--being able to imagine the flow of water, and the consequences of gravity. 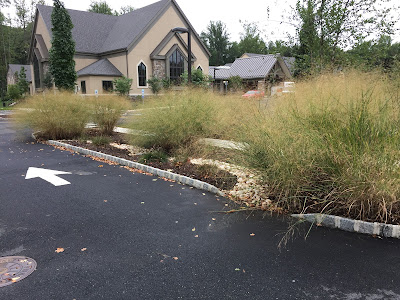 Meanwhile, up Bunn Drive from the Shopping Center, in the parking lot for Stone Hill Church, the raingardens were designed with much more care. The mounds of green and gold are switchgrass--one of the native prairie grasses that works well as an ornamental. 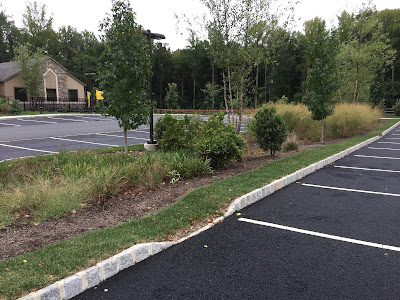 The long raingarden is lower than the pavement, and the curbcuts actually let the water in. 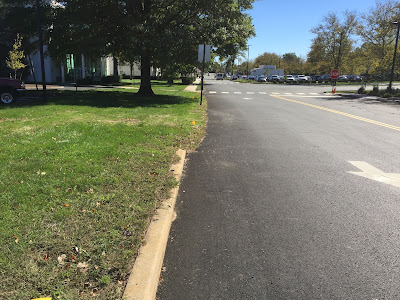 This last photo, back at the Shopping Center, shows how the best way to disconnect can be simply not to connect in the first place. Where no curb was built, the grass meets the pavement directly and runoff can flow into the turf, then be absorbed into the ground. Where the curb ends, where the informality of curbless streets are allowed, better runoff management begins. A chance configuration, with pavement higher than the lawn next to it, is working better than the fancy design of curbcuts and raingarden just a hundred feet away. Here's to the serendipity that sometimes comes from "not doing", and here's to PNC being required to call the contractor back in to make their raingarden actually work.
Posted by Steve Hiltner at Saturday, October 22, 2016