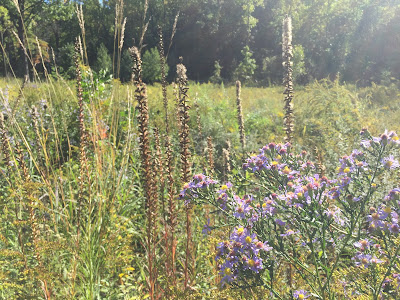 Each fall, I help a Princeton homeowner weed her marvelous meadow. It's light work because in past years we nipped a couple invasions in the bud, pulling out small patches of mugwort and Chinese bushclover--species that have taken over long stretches of the gas line right of way nearby--and bagging up the seedheads to prevent spread. We found only a few individual plants this year. I recommended removing some Queen Anne's Lace as well, a lovely flower that, alas, I've seen take over fields in the midwest, where it's more established.

Interestingly, what's causing some imbalance in the meadow are some of the native goldenrods, whose advance across the whole field is cutting back on populations of other wildflowers. This is a common shift in meadows. Many native goldenrods spread via rhizomes--roots that spread laterally and sprout new plants, creating expanding clones. I sought advice on the internet for how to bring the goldenrod back into balance with all the other desired meadow species. Midseason prescribed burns? Spot spraying with herbicide? Pulling individual plants? The online search yielded no clear solutions.

We watched a monarch sampling the meadow's millions of flowers, and then my eye caught something else entirely, a pair of praying mantises preparing to mate. 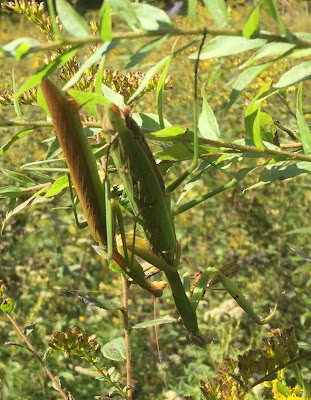 The male, smaller, clung tightly to the female's back. Weeding gave way to nature study, mixed with voyeurism. 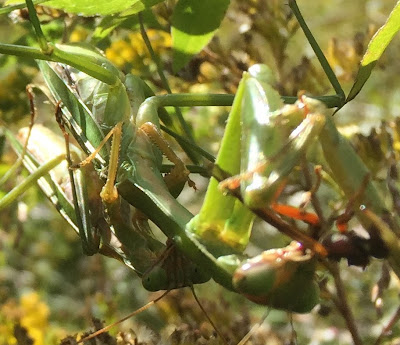 A wasp had been visiting a flower just above them. The next thing we knew, the female was clutching the wasp in her claws and chowing down as if the wasp were a shish kebob or an ear of corn. This casual and timely catch of dinner in the midst of procreation, as we learned later, was really good news for the male. 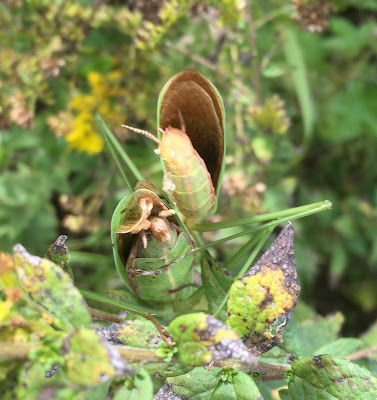 Nice of them to show us their business ends--male on the right. Had a hard time later on finding any nomenclature or function for the antenna-like structures at the posterior end of both male and female. 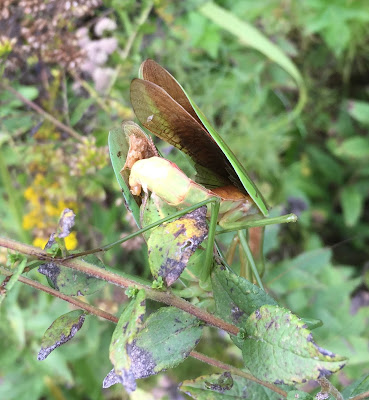 Several times, the male curved its abdomen over and under the wings of the female. This capacity to bend around may have something to do with the male's greater number of abdominal segments (8 vs. 6), which along with overall size is useful for distinguishing one from the other.

My friend said she'd read that the females have a habit of eating the males after mating. For some reason, I found this disturbing. Is evolution trending in this direction? All the more reason for the male mantis to think twice about breaking out a cigarette.

There are in fact, for your viewing pleasure, videos that capture this charming behavioral trait, and explain that the female is merely reaching for the nearest high-protein meal she can find, to nurture the next generation. And what sort of life does the male have to look forward to, with frost quick approaching?

One video shows that the female begins by eating the male's head, suggesting little respect for the male's intellect. The beheading can cause the male to mate all the more ardently, as if knowing this is its last chance. Plants can have a similar response to stress, bearing abundant seed when death seems imminent.

At some point, my friend's dog navigated its way past us, plowing its way through the dense wildflowers. It may have been at this juncture, with the female mantis distracted, that the male got going while the going was good. It flew a short distance away, looking a bit like a helicopter, its long body suspended below four wings catching the bright afternoon sunlight. Cockroaches, a close but less beloved relative of praying mantises, fly in the same manner.

The female, perhaps satiated by the little snack of wasp earlier on, didn't react. One bit of advice for any male praying mantises that might be reading: though praying could help, it's best to bring a little snack along for the misses. Small acts of kindness could take the female's mind off of biting your head off. Although, given your imminent demise as winter approaches, giving your body to feed the next generation could improve prospects for your progeny. Tough choice.

Though there are native praying mantises, we mostly encounter the two species introduced from China and Europe. I just hope they stick to wasps, and each other, and don't include monarchs in their diet. A quick googling brings up this post, which suggests that we may want to reassess our view of praying mantises as an unalloyed good.

(Track the Monarchs' progress towards Mexico at this link.)