It's gone now, but for ten days, a beautiful white dove lingered at the street edge in front of a recently vacated house on Franklin Avenue in Princeton. 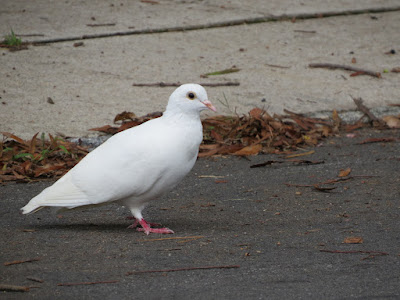 The first time I saw it, I thought it strange, but kept driving. The next day, it was there again, and I stopped.

The fact is, I don't remember ever seeing a bird quite like this. It wasn't a rock dove, or a mourning dove, or a seagull. It looked like a displaced pet, yet when I approached, it suddenly flew up like a bolt of lightening, and made a breathtaking arc far above. It began to circle back, saw I was still there, then headed north beyond the trees. I had never seen such a fabulous flight. The next day, it was there again. The neighbors who told me the dove had been there a week and a half said it "looked like it was waiting for an Uber."
Might it have been a pet of the people who had just moved out? Maybe its homing instincts are such that it escaped during their move and returned to what it considered home. But neighbors didn't think the previous residents had had a pet bird. The dove walked about on the pavement, pausing to peck at the ground.
After several days of seeing it there, and asking neighbors, none of whom knew where it had come from, I finally got serious about wondering what this bird was. Some internet research yielded two names for the bird: "release dove" and "java dove". Apparently they sometimes get included in wedding ceremonies, the idea being that the dove or doves will be released at a celebratory moment and fly up in the same breathtaking manner I witnessed, symbolizing the hoped for trajectory of the marriage, then dutifully fly up to 600 miles back to their owners until the next wedding gig comes along. They can also make symbolic appearances at funerals and public ceremonies.
The wikipedia page reflects disagreement about the tradition of release, with concerns raised about the fate of the birds following the release--the logic being that the birds are white and therefore particularly vulnerable to attack by hawks and other predators. Breeding for the pure white feathers may cause attrition of their homing instinct, making them more likely to get lost rather than return to their homes. It's conceivable that's what happened in this case, though the bird looked very sure it was in the right place.
There's even apparent disagreement about the latin name for the bird, with one sentence calling it a domestic rock dove (Columba livia domestica) and another calling it a barbary dove, (Streptopelia risoria). 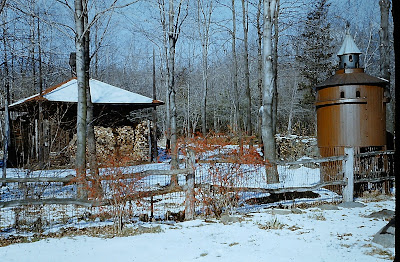 Photos from 1950 show a dovecote near the Veblen House in Herrontown Woods--the metal structure on the right that looks like a rocket. Most likely dating back to the 1930s when the Whiton-Stuarts owned the property, the dovecote could have housed doves for eating, carrier pigeons for messaging, or pigeons that were bred for display.
The dovecote is long gone from the Veblen House grounds, and the fate of the release dove on Franklin Avenue is a mystery. It may have flown off in search of food, been found by its owners, or been caught by a predator. But one thing now is deeply known and felt, and that is how astounding a dove's flight can be.
Posted by Steve Hiltner at Tuesday, October 19, 2021