Phyllis Marchand and the Benefits of Deer Culling 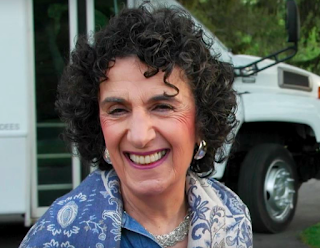 This past Sunday, Oct. 17, my Sustainable Jazz duo performed at a tribute to Phyllis Marchand at the DR Greenway's Johnson Education Center.

Phyllis was mayor of Princeton Township for 14 years. For those accustomed to Princeton having an all-Democrat town council, it's astonishing to read that when Ms. Marchand was first elected in 1986, she joined a township committee that had been all-Republican.  Her long tenure preceded the merging of township and borough. Since I lived in the borough, she was not really my mayor, but her environmentalism has had a lasting impact on the natural areas I've helped to manage over the years.

Among her many achievements, her courage in starting a deer culling program 21 years ago had all kinds of longterm benefits--dramatically fewer car accidents, recovery of native plant species, improved wildlife habitat, and a healthier deer herd. The culling program was very controversial at the time, with Mayor Marchand and other supporters having to endure heated criticism and personal attacks.

The data are very strong on the benefits of annual culling by professional hunters. Here is some data collected for a post about deer hunting in 2013. Deer killed in roadway collisions dropped from the high of 342 in 2000 down to 68 in 2010. In 2019, 555 deer were killed in the township by vehicles and amateur hunters. In 2010, after ten years of professional deer management, the total number killed by vehicles, hunters and professionals had dropped to 286. Thus, one can say that investing in professional deer management actually has served to reduce the total number of deer killed each year.

The township tried to save money by cancelling the deer culling in 2014, but deer numbers rapidly increased and the annual contract with professional hunters was quickly reinstated.

Given all of Phyllis Marchand's contributions to society through her long life, I had assumed that the deer culling issue was larger for me given my primary interest in nature. But the NY Times began its lengthy obituary with a detailed account of the controversy surrounding deer culling, including one sentence that is demonstrably false:

In the end, town officials declared the program a success because it had reduced collisions between deer and vehicles by 40 percent. But it didn’t solve the problem. The deer remain abundant, and while Ms. Marchand had contracted with White Buffalo for only five years, the town is still using its services.

The contract has been in place every year since 2000 except for one, and the deer herd is now small enough that many native plant populations have been able to recover. The obit doesn't mention the ecological benefits, but the article it links to does. Spicebush--a native shrub that is particularly important for bird habitat--is a dramatic example of recovery, once liberated from intense deer browsing. And the reduced browsing pressure has allowed many native wildflowers to bloom and provide nectar and pollen for insects. Having banished wolves and other predators of deer from the landscape, we then bear the responsibility to keep deer numbers in some semblance of ecological balance. Hunting is a way of stepping in to fill the void in natural predators. Mayor Marchand understood this twenty years ago, and weathered the storm to institute a policy that has proven its worth.

Phyllis Marchand, I've learned through her family, was a great fan of music sung by Nat King Cole and others. Sustainable Jazz usually plays all-original jazz and latin, but we added some of Phyllis' favorites from the American song book, including High Hopes, first sung by Frank Sinatra--a song whose lyrics can grow on you if you happen to have a dream. It's interesting to read in wikipedia that John F. Kennedy used a version of High Hopes as a theme song in his presidential campaign in 1960.