A Threatened Old Bridge, and Dead Fish Along Harry's Brook

We mostly hear about collateral damage, but there can be a lot of collateral discovery in the actions we take to care for nature or history. 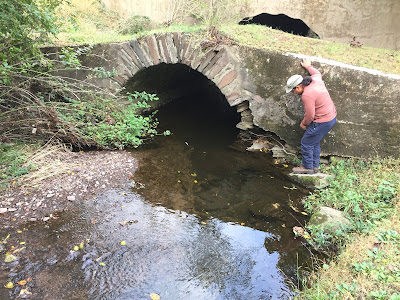 When I saw a young man named Galdino tuckpointing some stonework along Snowden Lane a couple weeks ago, I asked him if he would look at an old bridge that straddles a tributary of Harry's Brook just down the hill.

Before a new bridge was built beside it in 1965, this old bridge was used by the Pynes of Drumthwacket to reach their horses at "Pyne Ridge", and by the Whiton-Stuarts, the Veblens and Einstein to reach what we now call Veblen House. The bridge carried Princetonians out to Herrontown Woods during its first years of existence. 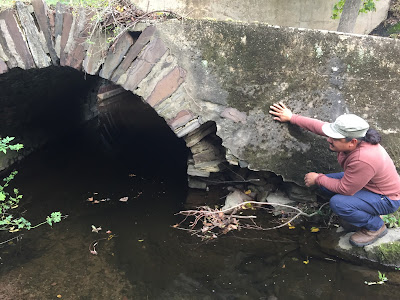 It's a beautifully made bridge, built of arched stones, and as you can see it is starting to slowly come apart, flood by flood, stone by stone. If it were to collapse, the town would have a big mess on its hands, with the stream blocked by rubble.
I have suggested that the bridge be preserved, repaired, and used as part of a bike/pedestrian route to give the Little Brook neighborhood safe access to Smoyer Park and Herrontown Woods. Currently, anyone walking or biking needs to "run the gauntlet" where Snowden Lane narrows between steep ditches from Overbrook out to Van Dyke.
But town engineers claim the bridge is now owned by the neighbor. Curious that a private homeowner would be responsible for a bridge whose collapse would block a New Jersey waterway. 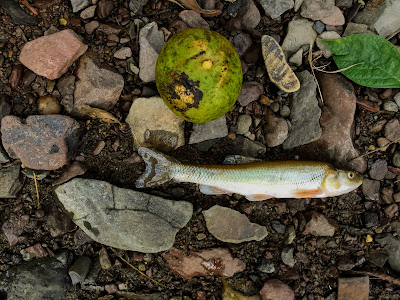 The collateral discovery was that we noticed a number of dead fish in the stream. I put one next to a walnut for scale, and sent the photo to a young naturalist named Felix who is learning about fish in the local streams. He told me it's a creek chub.
Hard to say what's going on. Fish kills can be caused by bacterial outbreaks, or low oxygen when the water gets too warm. Maybe the misuse or overuse of pesticides played a role. 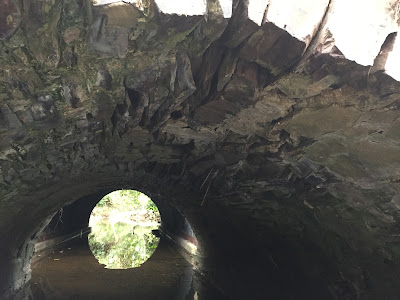 What IS known, however, is that this lovely old, carefully crafted bridge is not going to mend itself. Galdino pointed out that the stone arch work is not just on the facade but extends the full width of the bridge. Proposed development upstream could increase the runoff headed towards this fine piece of history that speaks to a time when Snowden Lane was considered a country road.
Posted by Steve Hiltner at Friday, October 29, 2021