The raingarden in front of the municipality's fuel tank on Witherspoon Street finally got planted. Like just about every piece of real estate in Princeton, large or small, this raingarden has a long and turbulent history. It was presumably created to receive runoff from a roof the town had built over the fuel tank. The roof was meant to protect staff from rain while they poured fossil fuel in their gas tanks, but spurred passionate complaints from neighbors, who complained about the visual blight upon a main entryway into town. 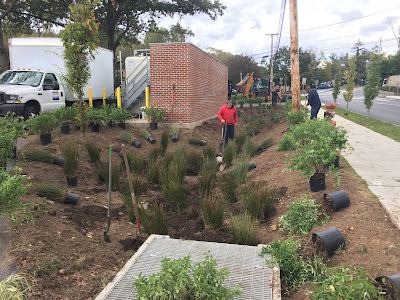 Thus began a long period of deliberation and rethinking, leading to the removal of the much-maligned roof, and consideration of whether to spend even more money to move the raingarden somewhere else, for whatever reason.

While humans hemmed and hawed, nature began populating the bare dirt with various weeds, leading to a post on this blog called Princeton's Fuel Tank Raingarden Wannabe, identifying the various weeds and discussing which would be worth keeping. If one knows and loves plants--knowing and loving being very much intertwined--it's pretty easy to develop a new raingarden planting simply by editing what pops up on its own, augmented by taking excess plants from an existing raingarden and planting them in another. Planting one raingarden makes the next one all the easier to create at no cost beyond time spent. 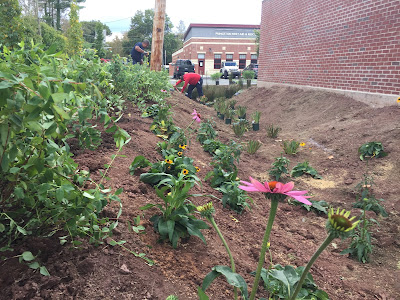 The town has its own logic, however, for better or worse. The raingarden was left untended for a couple years until the brick facade disguising the fuel tank was completed, and then in mid-October a host of plants were purchased and installed, along with a thick layer of mulch.
Soft rush were densely planted at the lower end, with purple coneflowers and black-eyed susans on the slopes. 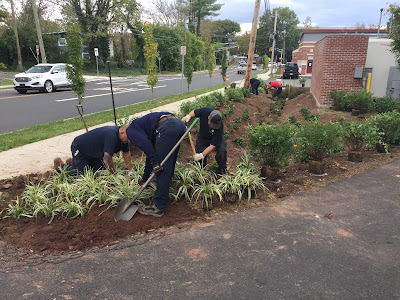 Though the men may not have been overjoyed at the task, it was good to see public works employees working with hand tools, away from all the rumbling machines that burn the fossil fuels hidden behind this raingarden.
Beyond the benefits of raingardens--filtration of runoff, groundwater recharge, food for insects and birds--they are above all a quiet space. Raucous lawn mowers and leaf blowers are of no use in a raingarden, where only quiet tasks like weeding and planting are needed.
The relentless racket of custodial lawncare that people so resent in our neighborhoods is the sound of machines simplifying and dominating nature while they feed climate change. When was the last time you saw an employee, public or private, quietly using hand tools in a garden? That's what made this scene along Witherspoon Street special.
Posted by Steve Hiltner at Friday, October 29, 2021