What to Think of Black Vultures?

The other day, I was thinking about how much I love chipmunks, and how much my sister hates them. How do we reach opposite opinions about the same animal? Are the chipmunks that now run amok in her vegetable garden the same chipmunks I fondly remember from childhood, scampering over rocks, their cheeks puffed out with their latest gleaning of nuts?

Vultures also tend to get mixed reviews. Some find them creepy; others laud their soaring skills and their ecological role of cleanup crew. There are two types in Princeton--the common turkey vultures and the less common black vultures that have been expanding their range to the north over time. Many people look up, see a bird soaring, and think it must be a hawk. More often it's a vulture, usually a turkey vulture, which is black with a feint streak of silver along the back of the underside of its wing. Black vultures' wings from below appear to be tipped with silver. 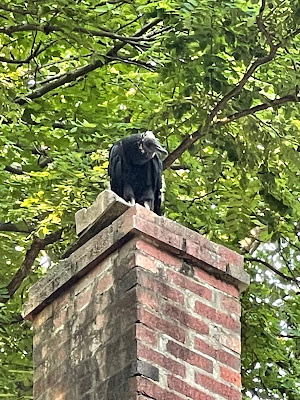 For years, black vultures have perched on the chimneys of the Veblen Cottage at Herrontown Woods. At first we considered them a bad omen, but then as we learned more about them we gained respect and began to appreciate their presence. The photo is by Julie Tennant, a neighbor to the preserve who has taken an interest in the birds. The vulture still has a ring of fluffy immature feathers around its neck. 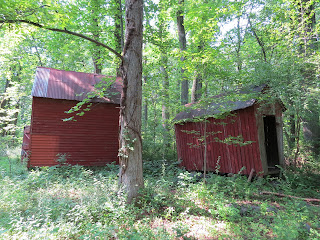 Each spring a pair of black vultures raises its young in the corncrib next to the cottage. People of course want to take a peek inside to see the chicks, but we worry that loose dogs and too many visitors could ultimately scare the vultures away. 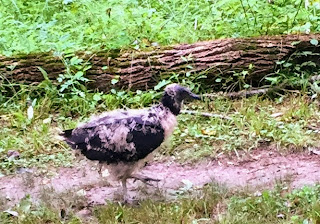 It looked like that had come to pass this summer when the vultures disappeared for awhile, but then we saw a chick out for a walk on the cottage grounds, its plumage very much in transition.

Four years ago, one of the two chicks was slow to mature, causing the family to linger far longer than usual, often perching on the chimneys of the Veblen Cottage. We were won over by the patience the parents showed as they waited for the second chick to mature.
It was odd, then, having learned to care about the vulture family, to encounter an article in the NY Times entitled
"Black Vulture Attacks on Animals May Be Increasing." Ranchers out in the midwest are claiming they are losing newborn livestock to black vultures that have been moving north into new territory.
It's not clear from the article whether the ranchers are losing healthy livestock, or if the vultures are moving in on calves that were stillborn or dying.
We're used to thinking of animals as occupying distinct categories. Predators kill, scavengers do not. But it would be interesting to explore how much overlap there is between the two roles. I've been struck by how black vultures's bodies look more raptor-like than the bodies of turkey vultures. And there's a bird we'd see along roadsides in Patagonia called the Chimango caracara. By its appearance it looks like a hawk, and yet it more often plays the role of a scavenger.
American black vultures are also expanding their range in Patagonia, potentially competing with Andean condors for food. Articles like these could work against the trend of our feelings about black vultures, which in Herrontown Woods have evolved towards affection. For us, they are fascinating birds, wild and yet drawn to live on the edge of our world, raising their young, and perching on the roof of nearby All Saints Church. (photo by Peter Thompson) 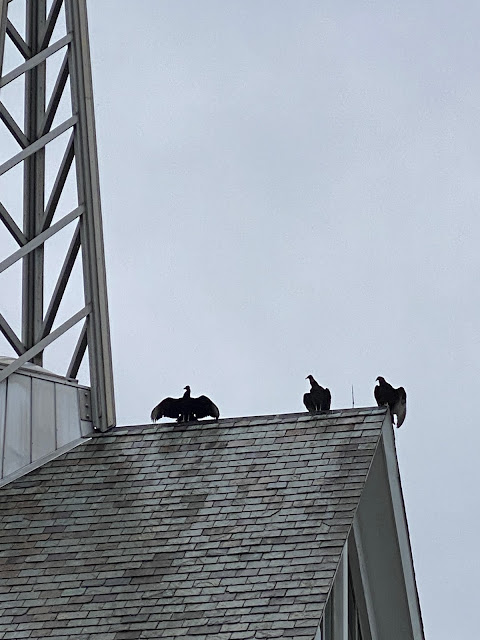