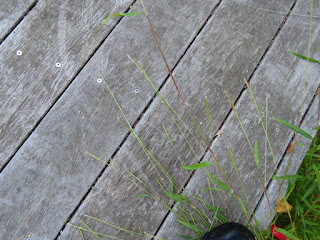 Last call this fall for pulling stiltgrass out of places you don't want it to grow. Princeton's most ubiquitous grass is going to seed, and once the seeds mature, they'll scatter if you try to pull the plant. Also called packing grass, Microstegium vimineum, according to internet legend, came to the States nearly a hundred years ago as packing for porcelain from China. It gradually spread from its first sighting in Tennessee, the seeds carried by myriad means: foot, wheel, hoof, or in transported topsoil or hay.

I liked its look when I first saw it in Durham, NC, in 1995, growing attractively along a stream. But its numbers exploded after the major disturbance of Hurricane Fran, and it soon became clear that this grass could grow almost anywhere, with no animal's appetite providing a balancing mechanism. In Princeton and elsewhere along the east coast, it now forms vast monocultures in many of our forests, typically growing to three feet high. From the perspective of wildlife, the result is a largely inedible forest, effectively shrinking our functional acreage of preserved land. 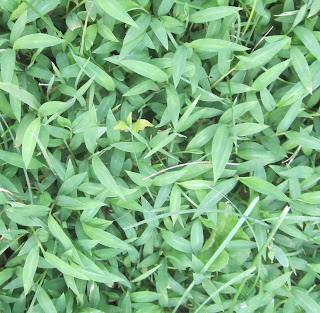 But it also prospers as a three inch invader of lawns, spreading to displace much of what you thought was perennial turfgrass. People used to think it would only grow on low, moist ground, but I found it recently starting to form blotches in the Princeton Battlefield turf along the ridge. It can be recognized by the leaves, which are somewhat broader than regular turfgrass.

Its voluminous seed production and lack of predators largely assures its ultimate victory, whether in nature preserves or yards, but gardeners with time and energy can still pick their spots and make a difference. This time of year, the green seeds will likely mature on the pulled stalks, so it's best to stuff them in black plastic bags and put them out for the trash, or pile them in a spot that's already infested, or where you can easily control any sprouts the next year.

I've heard that pre-emergent treatments used for crabgrass can also be used on stiltgrass, as can very dilute (1% or even less) applications of glyphosate to the foliage. Because stiltgrass uses the "C4" photosynthetic pathway (most plants use the less efficient C3 mechanism), I thought they should come up with an herbicide that specifically disrupts that aspect of the plant's biochemistry. Then one could spray the stiltgrass and not damage other plants growing nearby. An internet search produced evidence of such a chemical found in some organism that lives on corral reefs, but I wasn't able to track down the authors of the article.
Posted by Steve Hiltner at Sunday, September 20, 2015