After Emerald Ash Borer, What Will Princeton Look Like? 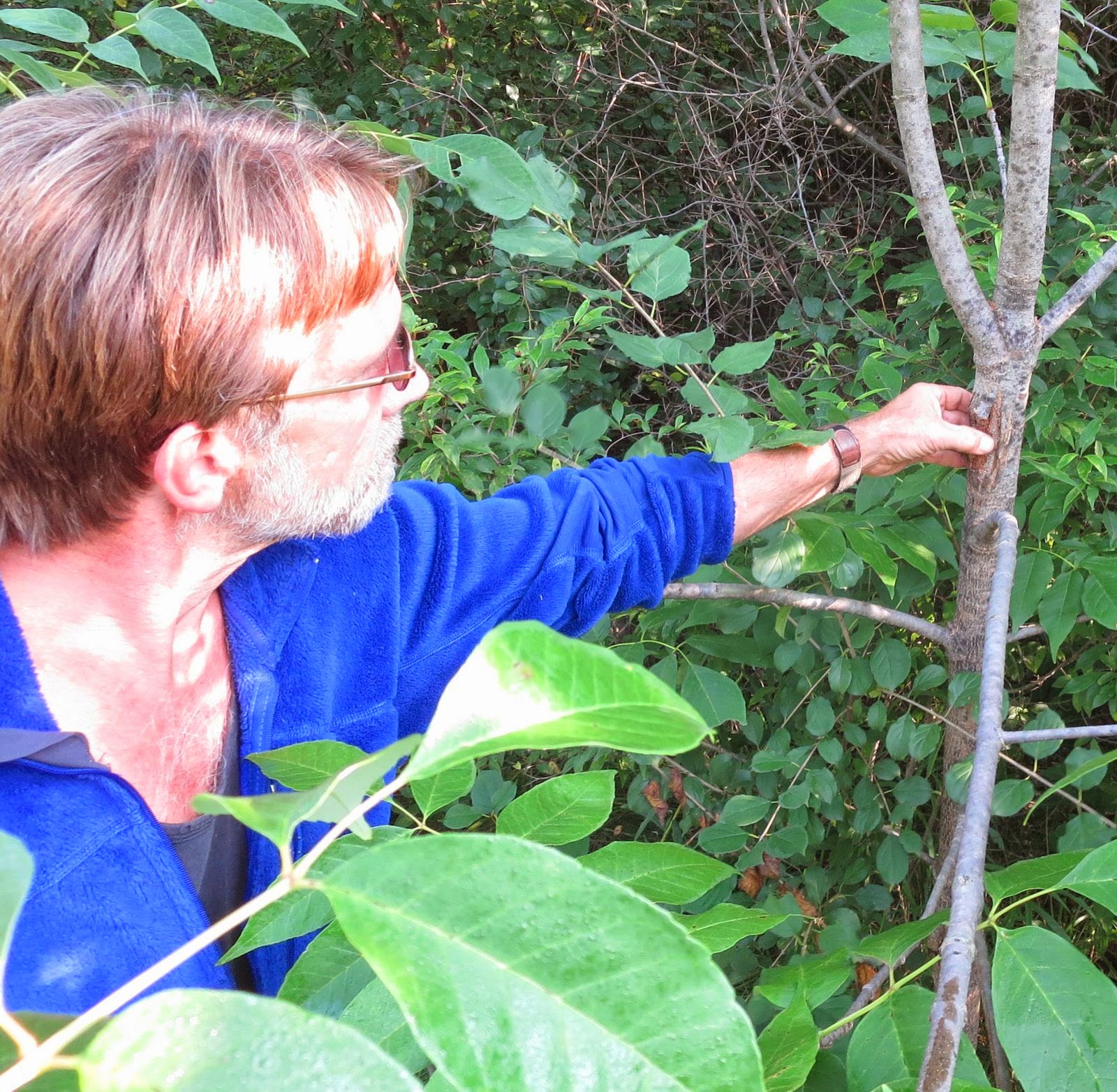 Back in July, I took a trip to the future. Princeton still has a few years before the emerald ash borer is expected to decimate our ash trees (what a cheery sentence that is), but Ann Arbor, MI, has already weathered the EAB storm. The city is located less than an hour away from the original introduction of the insect, which went unnoticed in the Detroit area from the early 90s through to 2002 when it was finally identified. The introduction was likely via wooden shipping crates arriving in Detroit/Windsor from China.

Ann Arbor's tree removal lasted ten years and cost $5.8 million. What does this city of 110,000 look like now?

By chance, my trip to Ann Arbor coincided with a visit by college friend and early EAB researcher Dave Cappaert. We visited County Farm Park, one of the sites where he and fellow entomologists did the dirty work of cutting open some 10,000 ash trees to study the behavior of the emerald ash borer and search for parasites that might help control its numbers.

While immersed in research on EAB, Dave discovered a formerly unknown braconid wasp that parasitizes EAB larvae, and now bears his name: Atanycolus cappaerti. Other useful parasites have also been discovered, here and in China, and they could play a role in reducing the number of emerald ash borers that continue to affect ash trees after the first mega-wave of ash borers passes through an area. There's a video that gives a brief history of EAB (complete with darkly evocative sound effects) and then describes three parasites of EAB that were found in China and are now being released in the U.S. after thorough testing. 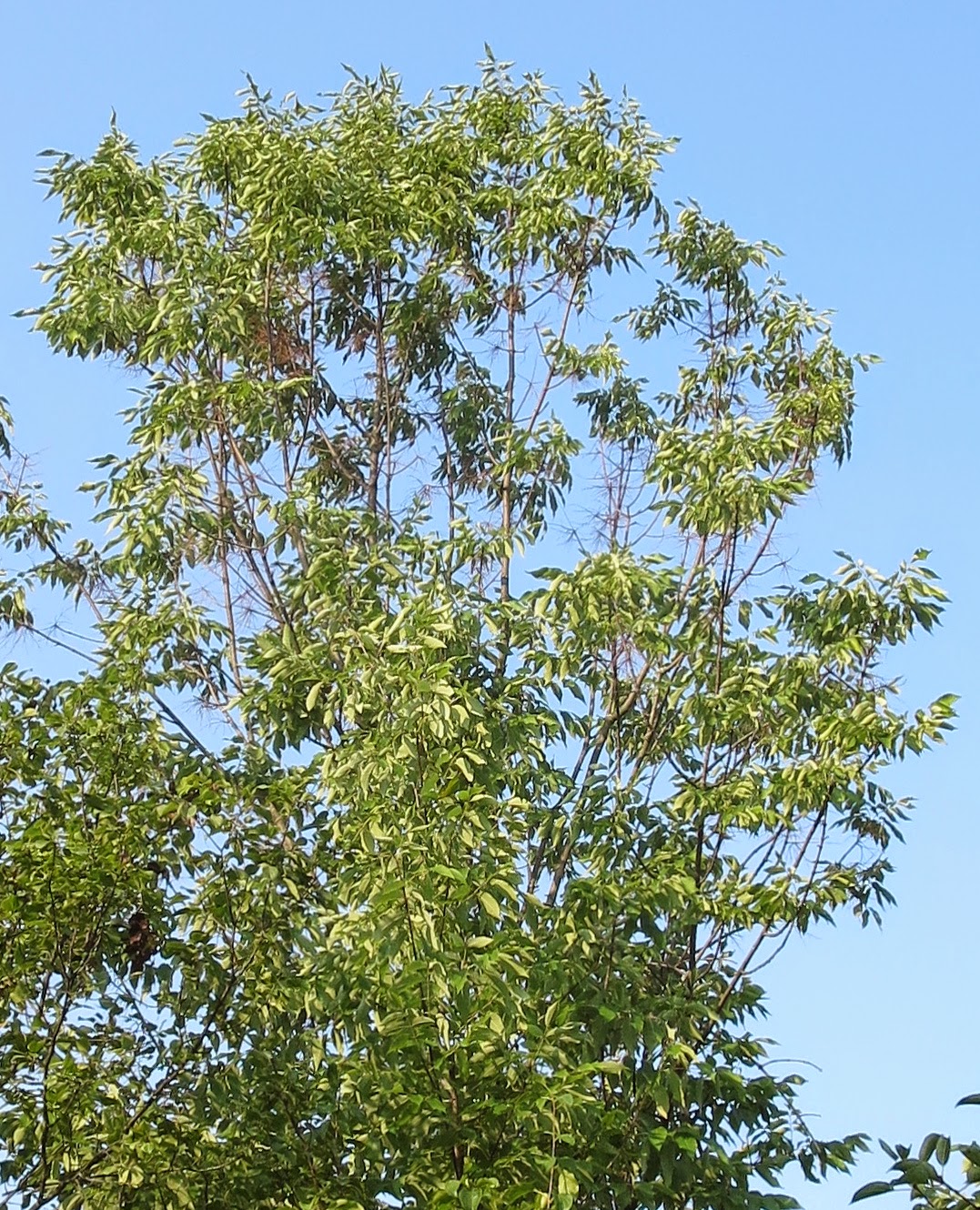 There's a bit of good news. Valued ash trees along streets or in yards can be spared, for a price. And wild ash trees do not disappear altogether. We found 20 foot tall ash trees making a go of it, here and there. Dave says that 80% of the EAB larvae get eaten by woodpeckers. It's still a mystery how the woodpeckers are able to locate the larvae under the bark with such consistent precision. Here's a young ash showing the outer symptoms of EAB attack. I would speculate that, once the native and introduced parasitic wasps become widespread, they in combination with woodpeckers could allow ash trees to persist in Princeton, though perhaps few would grow to maturity unless regularly treated with systemic pesticide. 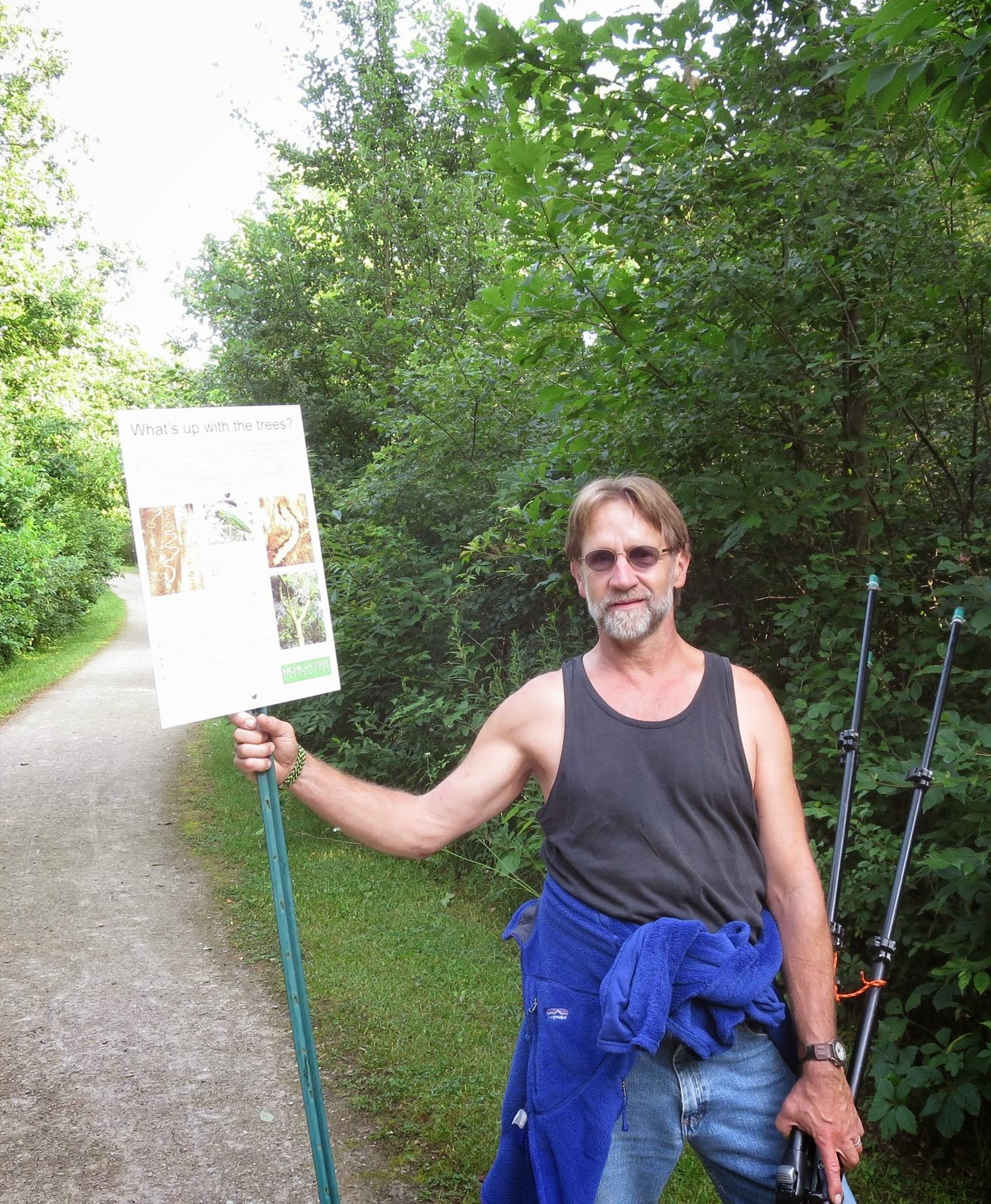 While we were walking around, Dave found one of the signs he and other researchers had placed around the park years back to explain why they happened to be pulling the bark off of thousands of trees in a public park. 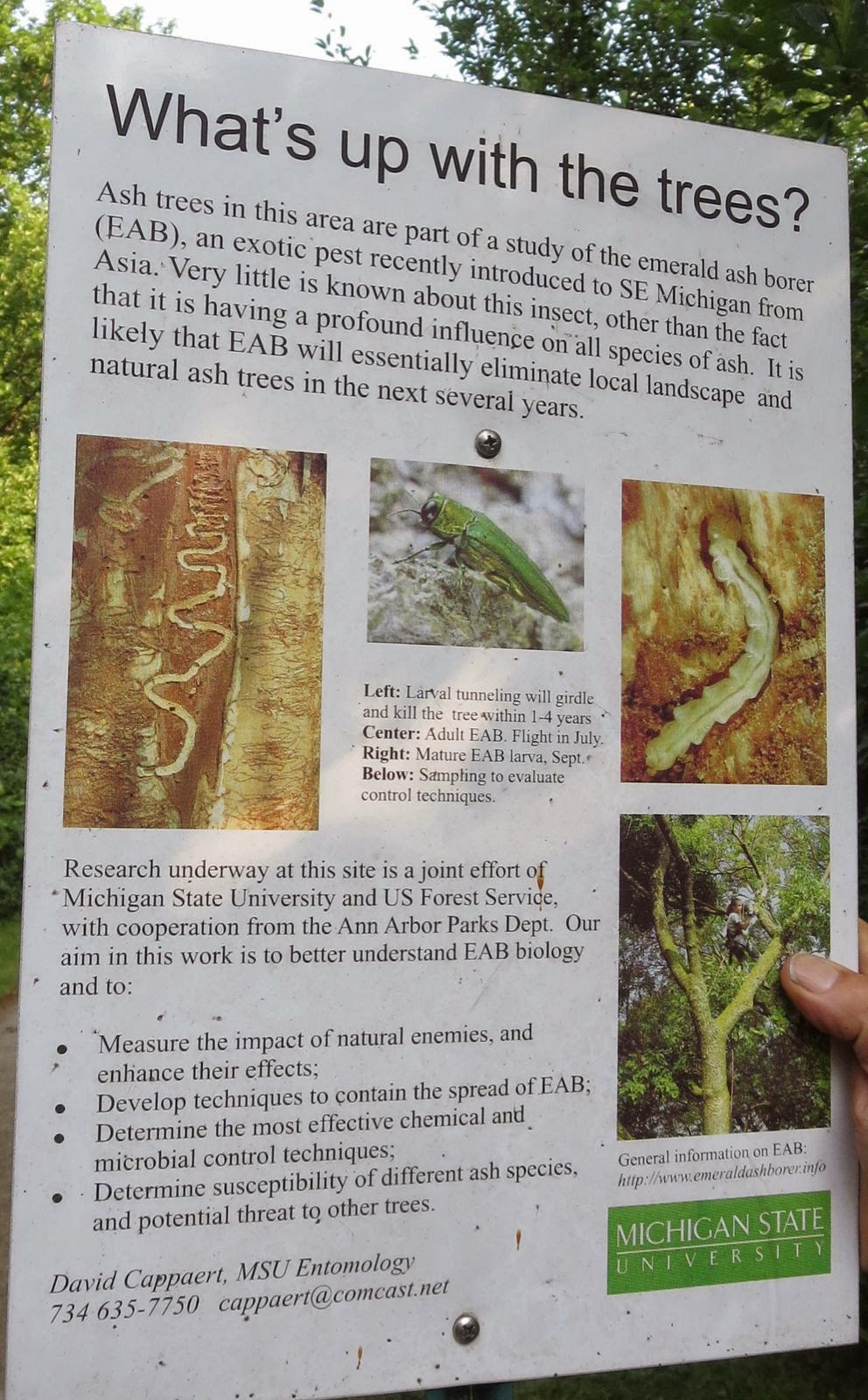 Click on the photo to make it more readable. 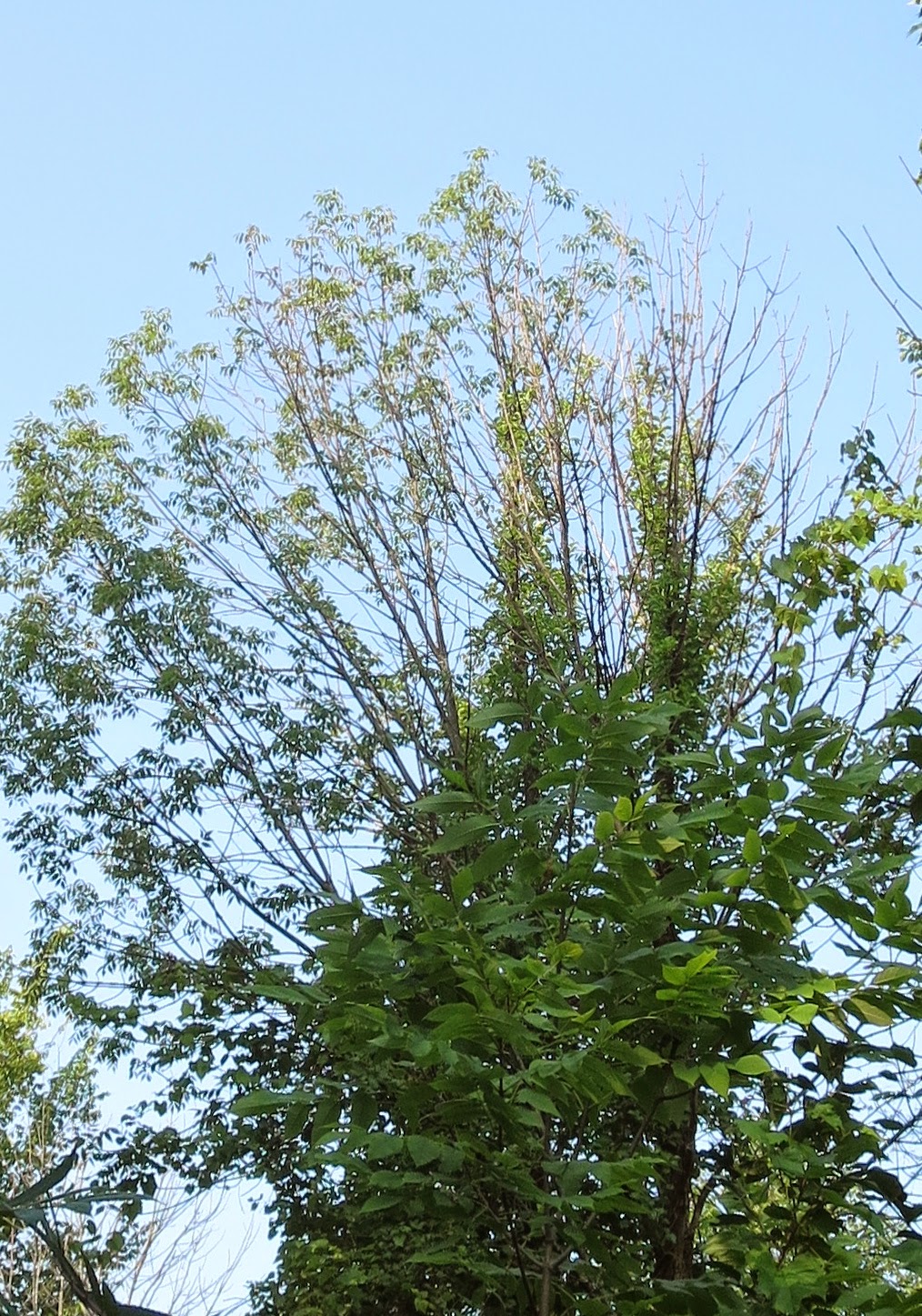 Here's an ash tree showing signs of dieback on the upper right--likely to be a common sight in Princeton in coming years.

HOW TO SAVE SPECIMEN ASH TREES

It's important for those who have ash trees in their yards to know that those trees can be protected with systemic pesticides. Not all the available pesticides are equally effective, however. Though imidicloprid is being frequently recommended locally, the experts in other states that I've spoken to have all recommended emamectin benzoate (brand name Tree-Age, or Arbor-Mectin).

Page 15 of this document is very informative, and says the emamectin is the most effective and longer lasting, while warning against use of imidicloprid on larger trees. Dave says that the EAB expert Deborah McCullough recommends emamectin, which is supported by this article about communities in Minnesota. The article is very optimistic about saving some ash trees, and offers this interesting approach:


"Burnsville is so sold on that idea of saving trees, rather than cutting them down, that it plans to encourage residents to treat their trees by extending to them the rates the city receives for pesticide injection. "

Curtis Helm, a former Princetonian and currently an urban forester in Philadelphia's Parks and Rec department, advises against using imidicloprid on trees larger than 16" diameter. He says Philadelphia is treating 1000 ash with Tree-Age.

In a previous post on the subject, I included notes from an extended conversation with Donald A. Eggen, Division Chief of Forest Pest Management Division of Pennsylvania. He, too, strongly recommended Tree-Age rather than products that use imidicloprid.

The emamectin benzoate, last time I checked, was more expensive, which may explain the local preference for imidicloprid, but that cost differential is reduced when the frequency of application is considered.
Note: The Arbor-Mectin formulation is said to be absorbed into the tree more quickly than Tree-age, and therefore can be less expensive to apply. Both use the same active ingredient.

Any decision about how Princeton should proceed with pesticide applications (some homeowners have already begun applications, given that EAB has been discovered 25 miles north of here), should weigh heavily the input of those in Michigan, Pennsylvania and elsewhere who have benefited from years of experience.