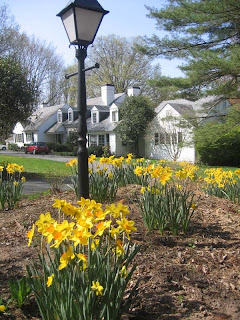 Thanks to the Garden Club of Princeton, whose members donated bulbs, time and effort to brighten up the grounds next to Mountain Lakes House.

The house, which is owned by the township but leased to Friends of Princeton Open Space (FOPOS), is rented out for weddings, parties and other events. All income beyond expenses helps support land preservation and restoration efforts in Princeton.

Daffodils, by the way, are an example of a non-native species that doesn't spread into local woods and fields.