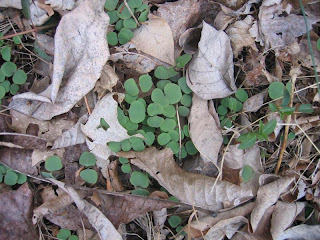 These cool, grey days aren't very springlike, but take a look amongst the dull brown leaves at Mountain Lakes, or most anyplace in Princeton that's within a stone's throw of a creek, and you're likely to see the wave of growth beginning its quiet surge.

Two annuals--one native, the other introduced from Asia--are sprouting in abundance. The first photo shows native jewelweed, which will grow to three feet and offer orange or in rare cases yellow tubular flowers to the hummingbirds all summer long. It has gelatinous sap that is used to treat poison ivy. If you put one of its leaves underwater, it will suddenly appear metallic silver. The flowers hang like earrings. Either one of these features could explain the common name. It's also called Touch Me Not, which refers to the spring-loaded seeds that explode when you touch the pods. But for now, they are just tiny sprouts among the dull leaves on a grey spring day. 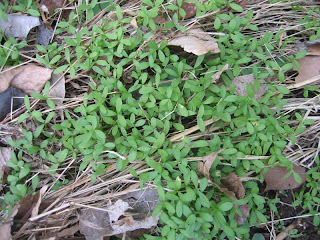 Some day I will commit an hour to counting how many Japanese stiltgrass sprouts come up in an average square foot of Princeton soil. Multiplied by how many square feet Princeton contains, the figure will no doubt soar into the trillions and beyond. There are whole meadows of this stuff in Princeton nature preserves, which means there is precious little room for native species once the stiltgrass gets through hogging all the nutrients, water and sunlight. It also changes the soil chemistry, which can have ecological ramifications.

People think of Kudzu as the ultimate invasive weed, but it's these little fellows that come up by the trillions that are turning our preserves into monocultures of plants no wildlife will eat.

I've heard that jewelweed is an invasive problem where it has been introduced in Europe. I wish that ecosystems had mechanisms for quickly bringing new species into some sort of balance, but wildlife seem to adapt their tastes very slowly, if at all, giving the uneaten exotics a huge competitive advantage.
Posted by Steve Hiltner at Monday, April 07, 2008