From Seed to Seedling to New Home 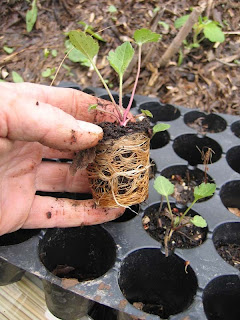 One of the objectives of the Friends of Princeton Open Space is to restore habitat in the many natural areas the organization helped to preserve. Part of this effort is to use remnants of local biodiversity as seed sources for reintroducing species that for various reasons disappeared from other preserves.

If enough of these wildflowers are grown, then we can start offering them to homeowners who want to improve habitat in their backyards.

The seedling in the photo was grown last year from seed collected locally. Cutleaf coneflower is a showy native wildflower that prefers sun but still blooms in the shade, and can grow to eight feet. It grows in only a few spots locally, most notably along the towpath, but with some help could beautify floodplains, detention basins, preserves and backyards throughout Princeton.

Here, it's being planted at Rogers Wildlife Refuge, as part of a habitat restoration project that began with the removal of the highly invasive Phragmitis reed by Partners for Fish and Wildlife. 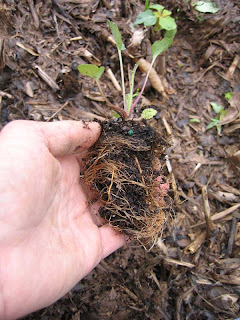 The rootbound seedling first gets its roots torn up (second photo), then gets planted, marked and (hopefully) protected from deer by a little tipi made of skewer sticks (an untested approach).

Though watering probably won't be necessary in the marshy ground, we'll need to check back to make sure the smartweed sprouting all around doesn't overwhelm it. 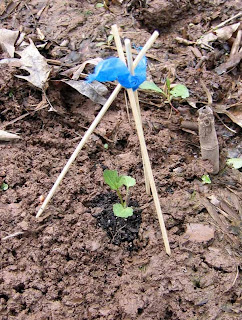