The Last Flower, or the First? 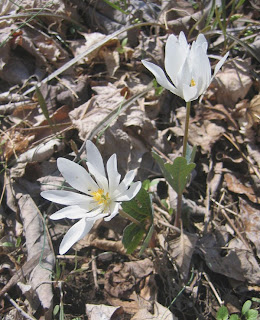 An improbable flower blooms on a slope overlooking the Mountain Lakes in Princeton. It's a bloodroot, the only one of its kind in the preserve, as far as I've been able to tell, and it wouldn't have been noticed at all if not for some observant weekend hikers.

I had been pulling up honeysuckle shrubs while my daughter built a stone house for an earthworm family along the creek--"so they can get married," she reported to me. We were about to leave when Owen and Marilyn came along. They had just noticed the flower, and showed it to us back up the trail.

The suspense now is whether this lone flower will have its daring investment in leaf and flower wiped out by a passerby--deer or human--or will be able to produce seed and spread. 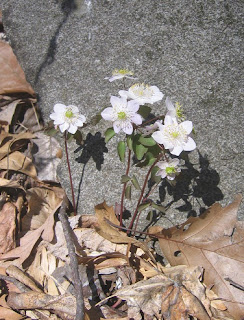 Another wildflower that's very rare in the preserve is windflower. I found only two patches of this species, maybe ten plants total.

They can easily be mistaken for spring beauties, which are much more common. 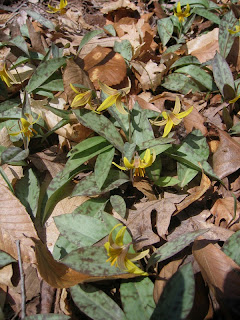 Common as the spring beauties are the trout lilies, though few of them actually produce flowers, for some reason.

Many factors have made wildflowers rare in the preserve--past plowing, the high deer numbers, the competition for sun and water from invasive species. The wildflowers are most numerous in places that were not plowed, such as along old roadways, in floodplains and along the lake edge.
Posted by Steve Hiltner at Wednesday, April 16, 2008