EEK! There's a bug in the house! 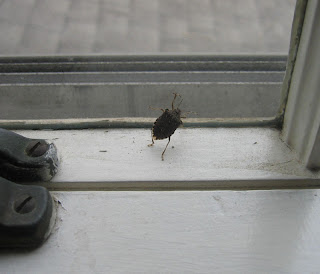 Call the police. Vacate the premises. Secure the perimeter. There's a bug in the house, and it's ready to attack.

Having been alerted to the situation by a distressed family member, I courageously approached the beast, armed with an insect identification book fully loaded with images and text. I fumbled through the pages, searching fruitlessly for a name with which to peg the intruder. Fortunately, my trusty companion Google was nearby, and soon gave me the lowdown on what I was up against: a fully grown Brown Marmorated Stinkbug!

Not wishing to engage this fearsome fellow in head-on conflict, I decided to let it crawl up on my finger, from which perch it was able to observe me starting to type this blog entry. Apparently in an attempt to do some editing of my description of events, it decided to hop down on the keyboard--dangerous territory for a highly squashable true bug, given the forest of flying fingers. By the time I thought to put it outside, it had already slipped off the keyboard and disappeared. I reported happily to the family that everything was under control.

Like another frequent indoor visitor--the Asian ladybug beetle--the brown marmorated stinkbug is not native to the U.S. It reportedly can raise a stink if it wants to, or if you crush it, but I didn't have a chance to find out. There are many colorful stinkbug species, but this is not one of them.
Posted by Steve Hiltner at Friday, April 04, 2008