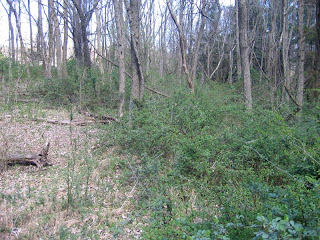 A typical scene in a Princeton preserve this time of year, with exotic shrub species greening up while the native trees are still dormant.

Most of these shrubs are multiflora rose, which bears thorns that will punish anyone daring to explore the woods. Removing these highly invasive shrubs has been a big part of our habitat restoration efforts.

Recently, though, I've become aware of a quiet accomplice to our efforts leaving signs of its work--signs that grow less subtle with each passing year. 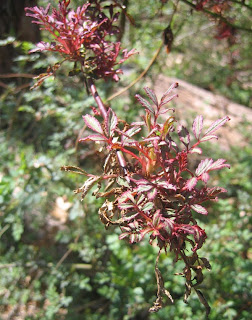 Rose-Rosette Disease, which causes infected multflora rose bushes to sprout dense clumps of distorted, red leaves, has been spreading through Mountain Lakes Preserve, and in some cases has killed shrubs completely.

We can dream that the virus, which has been spreading eastward from the western U.S., apparently spread by a tiny native mite, will eventually wipe out this prolific, intimidating weed, but it's much too early to tell. There's also the possibility that the disease will pose a threat to the native swamp rose and cultivated varieties. Still, at this juncture, there's reason to entertain hope.
Posted by Steve Hiltner at Thursday, April 17, 2008