A Landmark Tree is Gone 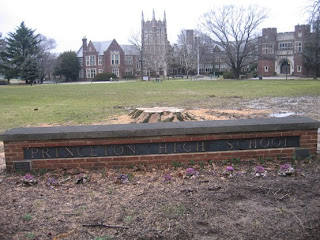 High schoolers on lunch break will have to seek elsewhere for shade. The grounds of the Princeton High School lost a venerable landmark recently (my teenage daughter thinks it was cut down before the windstorm hit two days ago). 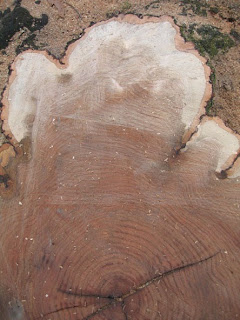 The rings were surprisingly easy to count--75. That puts its planting date around 1935, during the Great Depression, a time when much of Princeton was open farmland. 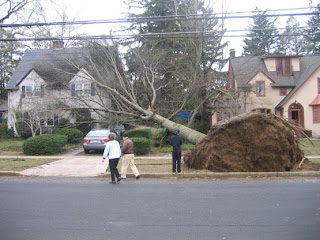 Across Moore Street, a similarly sized tree was pushed over by the wind, leaving a four foot deep hole where the roots had been. The house looked in pretty good shape, all things considered, but I imagine the roof of an SUV is harder to touch up with a few new shingles.

Another house, on Murray Ave, also sustained a direct hit from a very big tree, but apparently suffered even less damage. The multiple trunks must have spread out the impact, and landed on the house in such a way that not even a window was broken. 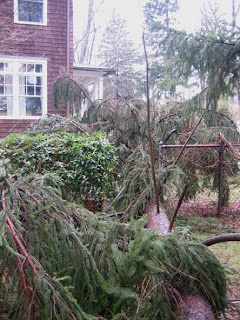 More often, the story was of near misses. This spruce, guided on a precision route by happenstance, only grazed the gutter of the house, and fell through the fence in such a way that only the gate needs to be replaced.
Posted by Steve Hiltner at Monday, March 15, 2010