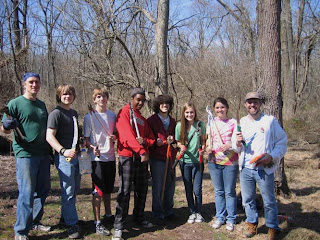 Thanks to Rob Olszewski (right) of Westerly Road Church and a hardy group of teens who came to Mountain Lakes to help remove invasive species from the preserve on March 21. Andrew Thornton (on the left) helped me supervise.

As we worked, using loppers to cut exotic honeysuckle shrubs and multiflora rose growing beneath a grove of walnut trees, some of the kids mistook the word "lopper" for "Whopper". Turned out they were all in the midst of a 30 hour fast, in order to better understand the plight of the more than 1 billion people worldwide who don't have enough to eat. The weekend event was part of a national effort by World Vision to raise awareness and funds to reduce world hunger.

After a couple hours of productive work, we hiked over to Mountain Lakes House, to see the lakes, the native plants that have overwintered in the greenhouse, and a new trail built around the many trees felled by the recent windstorm. The kids showed a great work ethic and interest in the restoration efforts at the preserve.
Posted by Steve Hiltner at Tuesday, March 23, 2010