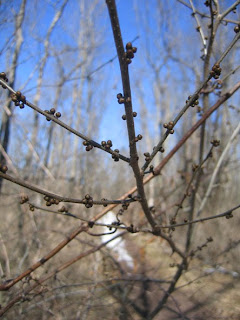 It's a time of sleeping promise at Mountain Lakes Preserve. I'm not up on plant medicines, but if one's optimism is being beaten down by the world, flower buds on a spicebush can be a salve. Those buds tell of flowers to come, and also lipid-rich berries that will help birds get where they need to go this coming fall.

The abundance of buds on this stem owes to the direct sunlight this particular shrub gets during the summer, next to a sewer right of way that's kept clear of trees. The productivity of a nature preserve must be judged not only by its trees, but also by whether enough sunlight is getting through to sustain healthy shrub and herbaceous layers closer to the ground.

One participant in our nature walk last week pointed out that spicebush can be identified in winter by using a scratch and sniff test. Scratch the stem and smell the spicy aroma. 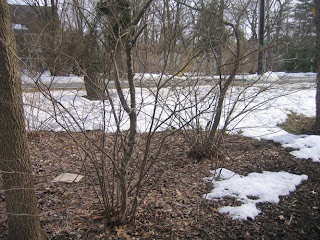 The many spicebushes in the preserve serve as historians, always ready to tell their story to anyone with the relevant reading skills. Each of the two shrubs in the photo have a single large stem surrounded by many smaller ones. The large stems predate the explosion in the deer population that peaked about ten years ago.

During those years when deer numbers were very high, the deer were so desperate for food that they would eat new spicebush sprouts to the ground each winter. Only the old stems, tall enough to be out of reach, allowed the spicebush to survive. Since the township began bringing deer numbers back into ecological balance, new sprouts have been able to grow to maturity, producing berries needed by wildlife. 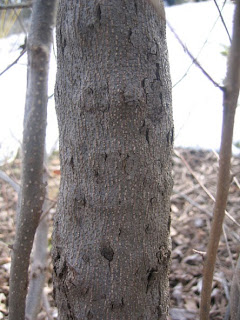 Once new stems grow tall, a shrub will often allow its old stem to die, its function as a lifeline through hard times done. Counting the growth rings of one of the younger stems would likely reveal when browsing pressure began to drop. 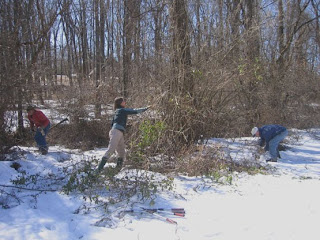 During yesterday's walk, we stopped to help out one of the few native hazelnuts in the preserve. Andrew (left) is cutting exotic Photinia shrubs while Annarie and Clark cut Japanese honeysuckle and Asian bittersweet vines off the hazelnut. We left one vine growing--a native grape that bears large, delicious grapes in the fall.

Though some might be skeptical, it is enormously satisfying to do invasive plant control in the winter, while nature is asleep. We function in the woods much like dreams do in the sleeping mind, relieving stress so that when nature awakes in the spring it finds itself mended. 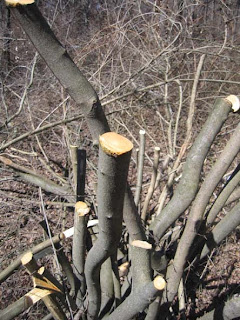 I used to follow the rule that one should bend down and cut stems of invasive shrubs to the ground, but as I get older, that rule becomes a very attractive one to break. The freshly cut stems are treated with a dab of glyphosate to prevent regrowth. 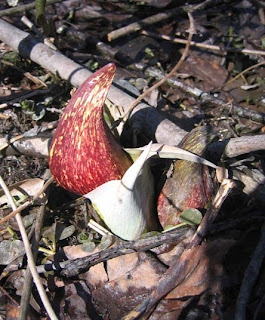 Foundation plantings in town may feature crocuses just starting to bloom, but out in low-lying woods, it's skunk cabbage that has sent up its hooded flower.
Posted by Steve Hiltner at Sunday, March 07, 2010