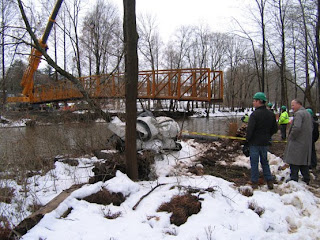 The missing link is missing no longer. A pedestrian bridge was recently installed across the Stony Brook near 206, just behind the Hun School, filling in a key gap in a trail planned to eventually completely encircle Princeton.

Having attended some of the Friends of Princeton Open Space meetings where Helmut Schwab and others gave updates on their efforts to realize a circum-Princeton trail, I can attest to the extraordinary passion and persistence needed to make such dreams a reality.

Helmut's history of the effort, copied below, provides insight into the quiet heroics of community volunteers, without which most of Princeton's greenspace and trails would not exist. Funding for the bridge was primarily through a $500,000 grant from the Army Corps of Engineers.


(Photo and text from Helmut:) Late in 1993, when I was an active member of the Friends of Princeton Open Space, our work on preserving the Institute Lands appeared successful. We now had a string of wonderful open spaces in our community – Mountain Lakes, Community Park North, the Petoranello Gardens, the not-yet protected Coventry Farm, the later Greenway Meadows Park, some land along the Stony Brook – but nobody knew quite where – the soon expected Institute Lands, and the very long Tow Path leading around the south of our communities. All were disconnected from each other.

Furthermore, the State of New Jersey actively supported “transportation enhancements” away from road traffic. A new Loop Trail around Princeton with a bridge connection would allow for bicycle and pedestrian greenway access of downtown facilities – Township Hall, Community Park North sports fields, and several schools – to the inhabitants of the Western sections of town.

Other communities in the country pursued the idea of greenways – possibly along old railway tracks. We realized that we had a short abandoned piece of the former trolley tracks leading past Elm Court to a former Stony Brook bridge.

Each committee member assumed the responsibility to explore one sector of the Princetons for the possibility to establish greenway connections – walking or biking trails remote from traffic and along vegetative corridors.

Our work culminated in our FOPOS committee report of April, 1995: "Linking Princeton Open Spaces". A trail map for Princeton was drawn, accepted in the Master Plan, and still valid – including new trail additions.

Ron Berlin had been responsible for scouting out detail opportunities in the south-west sector, which he summarized on page 37 of that report. This includes the words "The Loop Greenway follows the course of Stony Brook until crossing to the west bank of the brook over a future foot bridge, (where) it reaches the Jasna Polana property".

This led to the production of the brochure "The Missing Link" in 1997 and a massive fund-raising effort in the late 90ies, mainly seeking grants with the help of political support (see the brochure "Transportation Enhancements" done by DOT under Governor Whitman).

At one point, Prof. Billington of PU had his students produce three model designs for the needed bridge to close the Missing Link!

We produced a wonderful video demonstrating the need to resolve the Missing Link!! (Wendy Mager was the speaker). Some copies of that video are still around.

As the grant money came in, the detail feasibility and environmental studies began.

This led to the need for "handicapped access" -- which required switch-backs in the otherwise steep trail approach to the bridge. It took another couple of year to acquire the Clemow property to provide room for the needed trail switch-backs.

The environmental studies were done by late 2009. By that time, all the delays and inflation let the grant funds appear inadequate. But then the financial downturn set in. To our surprise, our now issued request for quotes by bridge construction companies brought surprisingly lower prices, within our means!

A Sampling of May Flowers