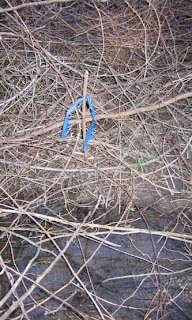 Someone forgot to take photos of a March 18 workday after school at Little Brook Elementary, during which Martha Kirby, the school's science teacher, parents and kids began restoring habitat along the nature trail. The only visual that made it into my camera is of this "live stake" of elderberry planted next to Little Brook's little brook.

The school's woodlot is a spectacular mess after the storm. One parent cleared trails with a chain saw while the rest of us cut back invasive multiflora rose and honeysuckle. As is common in Princeton's woodlots, most of the trees are (or were, given the storm's devastation) native, but the shrub and herbaceous layers are nearly all exotic. Only a few native spicebush can be found, along with some black raspberries, and the one native elderberry bush, from which we cut two-foot long stems that will sprout roots and leaves if pushed deep into wet ground.

Two hours later, the trails were mostly cleared and the balance of vegetation was shifted a few degrees in the native direction.
Posted by Steve Hiltner at Monday, March 22, 2010