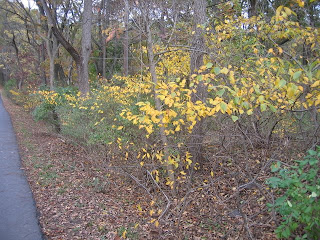 This past Saturday, on a classic fall day, I led a walk through Community Park North and Mountain Lakes. This is the time of year when trees and shrubs emerge from their green camouflage to announce their identity in bright colors. Scanning a hillside, one can quickly inventory the woody constituencies it serves. I keep thinking the leaves should have numbers on them--1 for yellow, 2 for orange, 3 for persistent green, etc.

The first photo shows spicebush in yellow, competing with the persistent green of honeysuckle shrubs. 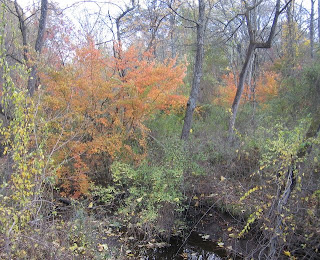 Orange this time of year at Mountain Lakes typically means Asian photinia. It was easier to appreciate their beautiful fall color before it became apparent they were taking over large areas of the park. 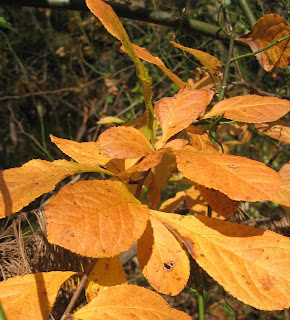 This closeup shows the Asian Photinia's obovate leaf (wider towards the tip). 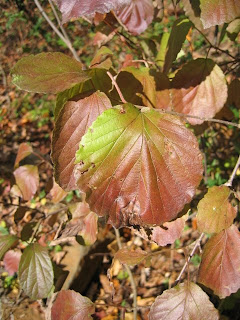 Viburnum dilitatum, which unfortunately is also an invasive, has its own color scheme. 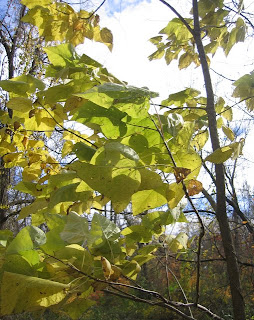 Catalpa, with its big oval leaves, pops up in the forest as it does in people's backyards. 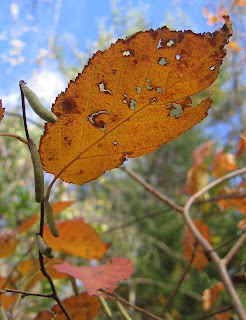 The native hazelnut (note catkins on the left that emerge this time of year) numbers only three or four individuals at Mountain Lakes. We're trying to get more of them growing. 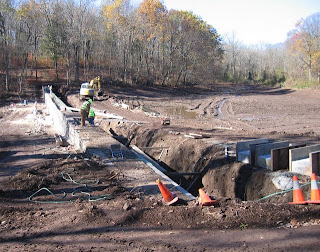 Towards the end of the walk, we stopped by the eponymous lakes, where repair of the dams is coming along nicely. 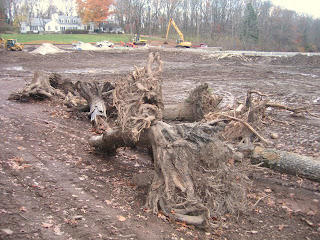 Several days later, I stopped by to find tree stumps dropped in a heap in the upper lake. These, saved from a small patch of woods that had to be cleared for the contractor's staging area, will be secured to the lake bottom as fish habitat.
Posted by Steve Hiltner at Friday, November 19, 2010