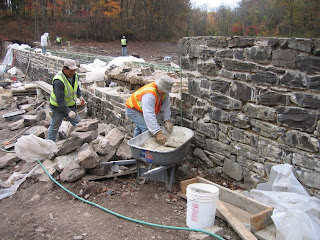 Work is proceeding apace on restoring the two historic dams at Mountain Lakes. The dams were originally built around 1900 as part of an ice harvesting operation that supplied Princeton with ice for several decades before refrigerators became available. An anonymous donor provided the nearly $3 million needed to fund the restoration and lake dredgings. In the photo, workers are rebuilding the stone facing of the upper dam. 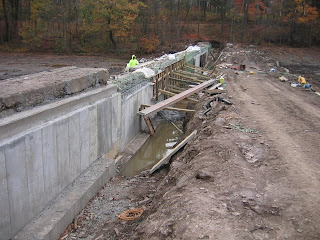 Meanwhile, on the upstream side of the dam, new concrete is being added to reinforce the structure. The dirt access road on the right will be removed after restoration is complete. When the lake is allowed to fill up again, possibly as early as this December, the water will regain its original depth of eight feet. Prior to dredging, the lake was barely one foot deep, with seven feet of sediment under that. 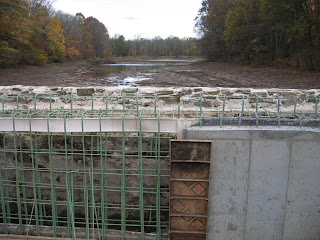 Seen from the upper dam, the drained lower lake is an expanse of mud, with any remaining fish and turtles huddled in a small area where water remains. Snapping turtles with 2 foot wide shells (they get bigger with retelling) were frequently sighted in the lower lake, and one of them may still be lurking in the remaining water. Fish in the two lakes were removed prior to draining in July, and mostly relocated to Lake Carnegie. 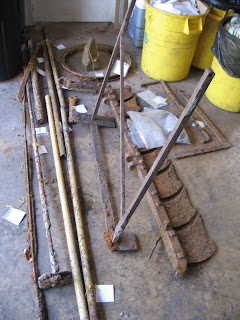 Archeologists recently used metal detectors to find some century-old tools buried in mud in the lower lake, left over from the ice cutting era.
Posted by Steve Hiltner at Tuesday, November 09, 2010