Creating "Rooms" in Your Yard For Leaves 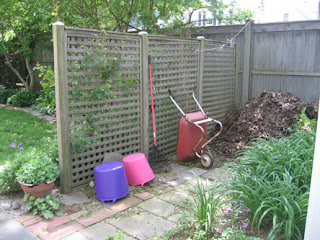 One of the perennials that keeps growing in my mind is puzzlement over why people dump leaves on the street each fall. All that good fertilizer and organic matter piled on the asphalt, as incongruous as a beached whale! One contributing factor I've hit upon is that most yards lack "rooms." If the yard can be considered an outdoor extension of the indoor living space, it makes sense to divide it up like we divide up our indoor space--into compartments each with a different purpose.

The typical yard has shrubs pushed against the house and fenceline, defining only one sprawling "room" that extends uninterrupted to the curb, all of which is then required to be ornamental.

If, instead, we use shrubs or wooden walls to define and obscure small utility areas in our yards, it becomes very easy to store leaves while they decompose and slowly return to the soil from which they came. Nature's miraculous trash-free economy is then allowed to function, and we're spared a big mess in the streets and the considerable municipal cost of hauling, grinding and mechanically turning leaves at a distant composting center.

The photo shows one such configuration in a friend's backyard. Another version, using shrubs to define the space, is shown two posts prior to this one, below.
Posted by Steve Hiltner at Thursday, November 11, 2010