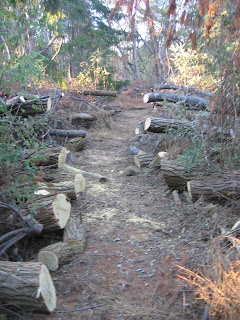 The winter storm that downed hundreds of trees in Community Park North and Mountain Lakes obliterated portions of the trail heading up to Witherspoon Woods. The Friends of Princeton Open Space trails committee soon established new trails to sidestep nature's logging operation, but many regular hikers were asking when the old trail would reopen.

Clark Lennon, who has done so much to improve trails at Mountain Lakes and elsewhere, finally took chainsaw in hand and spent three days cutting through the horizontal forest. "Fifty one trees!", he reported. 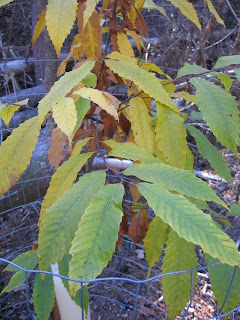 Just to the left of this scene, in openings left by the storm, grow three native American Chestnuts, planted by Bill Sachs this past spring, then watered by Bill throughout the dry summer.

These are two of the labors of love that enrich life in Princeton.
Posted by Steve Hiltner at Friday, November 19, 2010