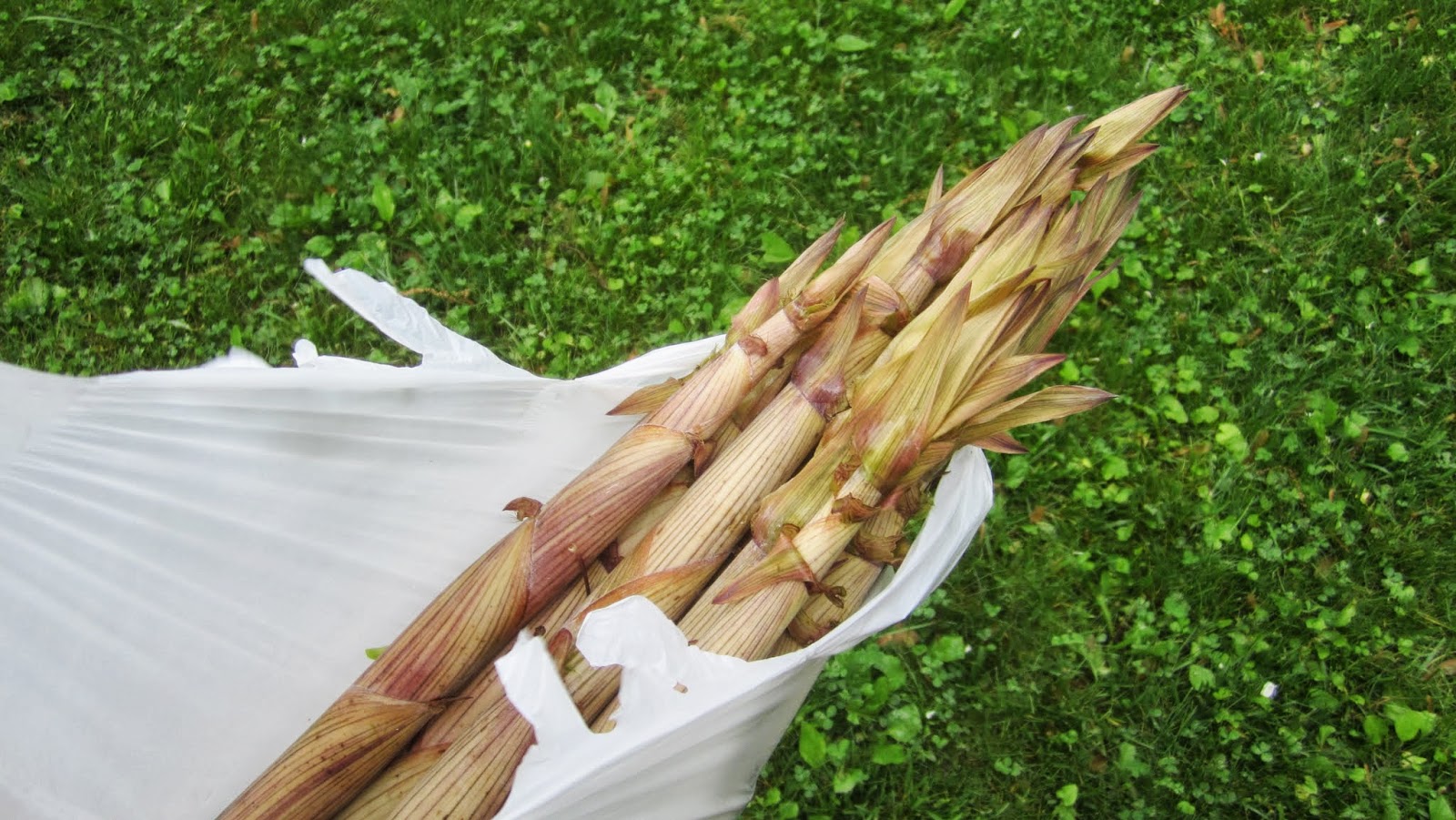 A few weeks ago, as the local patches of bamboo were launching their spring offensive, consolidating their holdings of pricey Princeton real estate while expanding across fencelines into new territory, I encountered a Chinese man on the sidewalk, carrying a plastic bag of bamboo shoots. He looked like the real deal, as if he'd just stepped out of the labyrinth of a traditional Hutong neighborhood in China. Resident tourist that I am, I asked if I could take a photo, but he didn't speak English, and headed off towards the senior housing down the street. 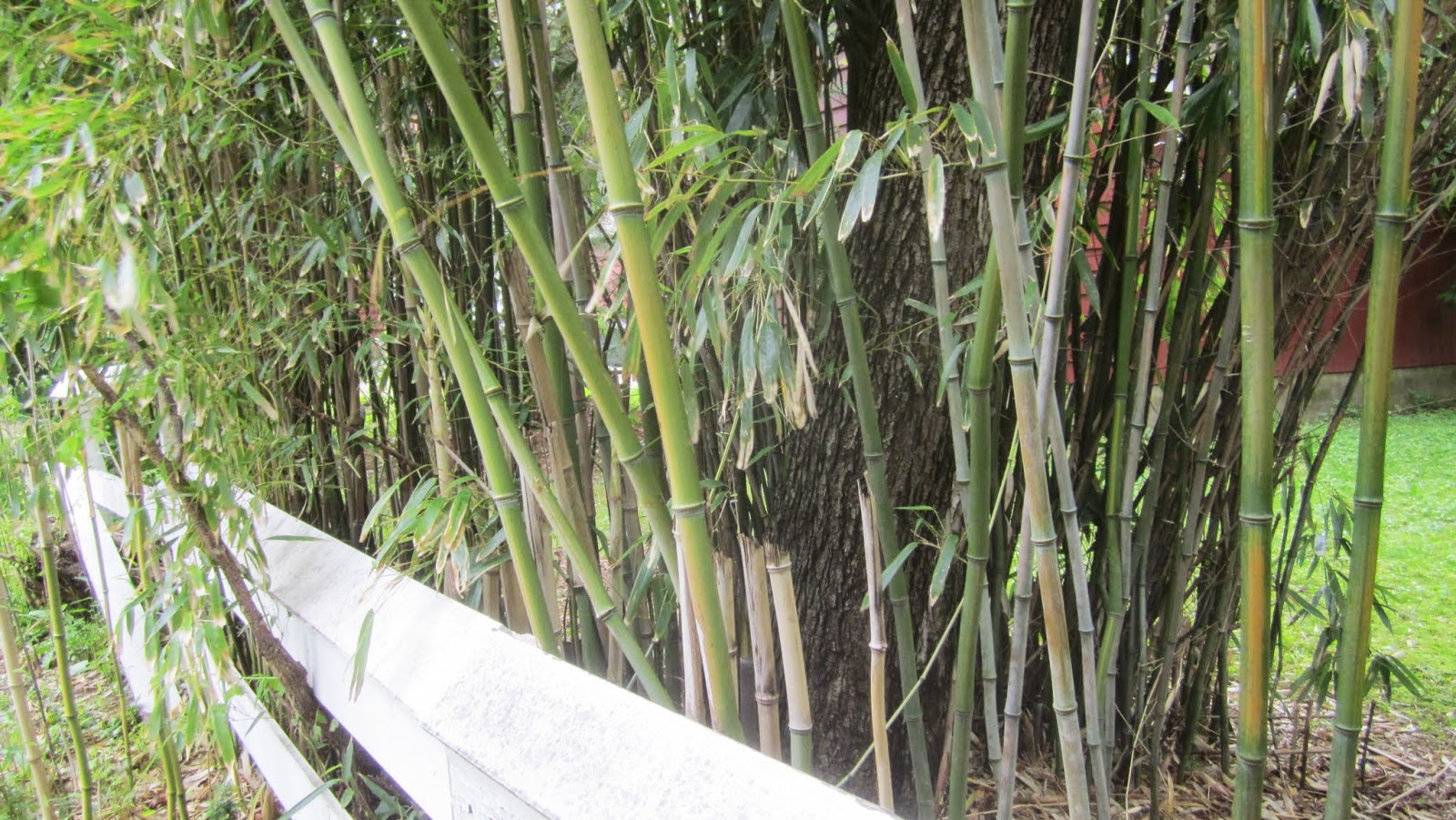 His harvest had probably come not from McCaffery's but from a patch of rogue bamboo across the street, 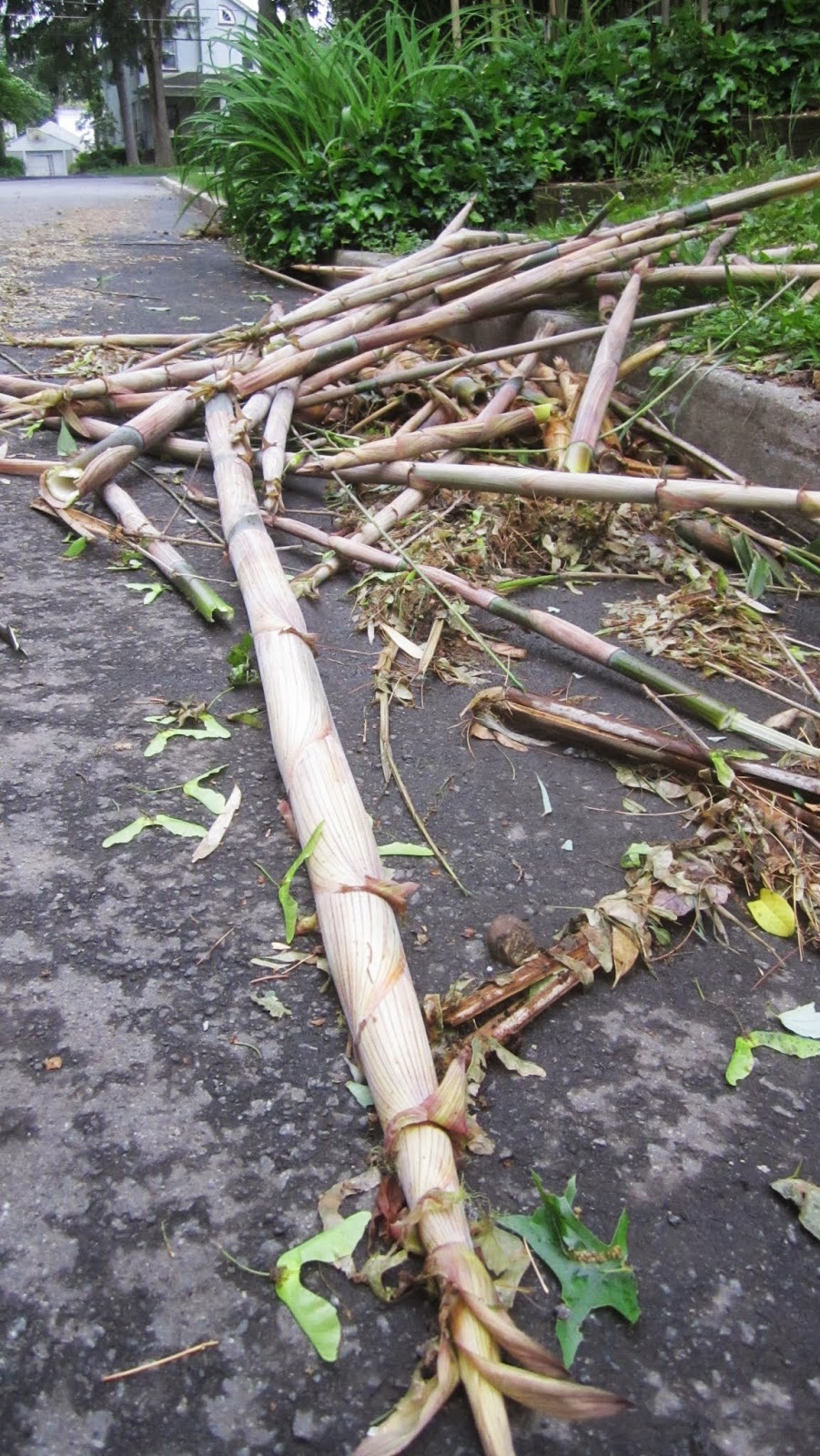 whose adventurous sprouts periodically block drivers' views, get trimmed, and end up in a heap in the street. 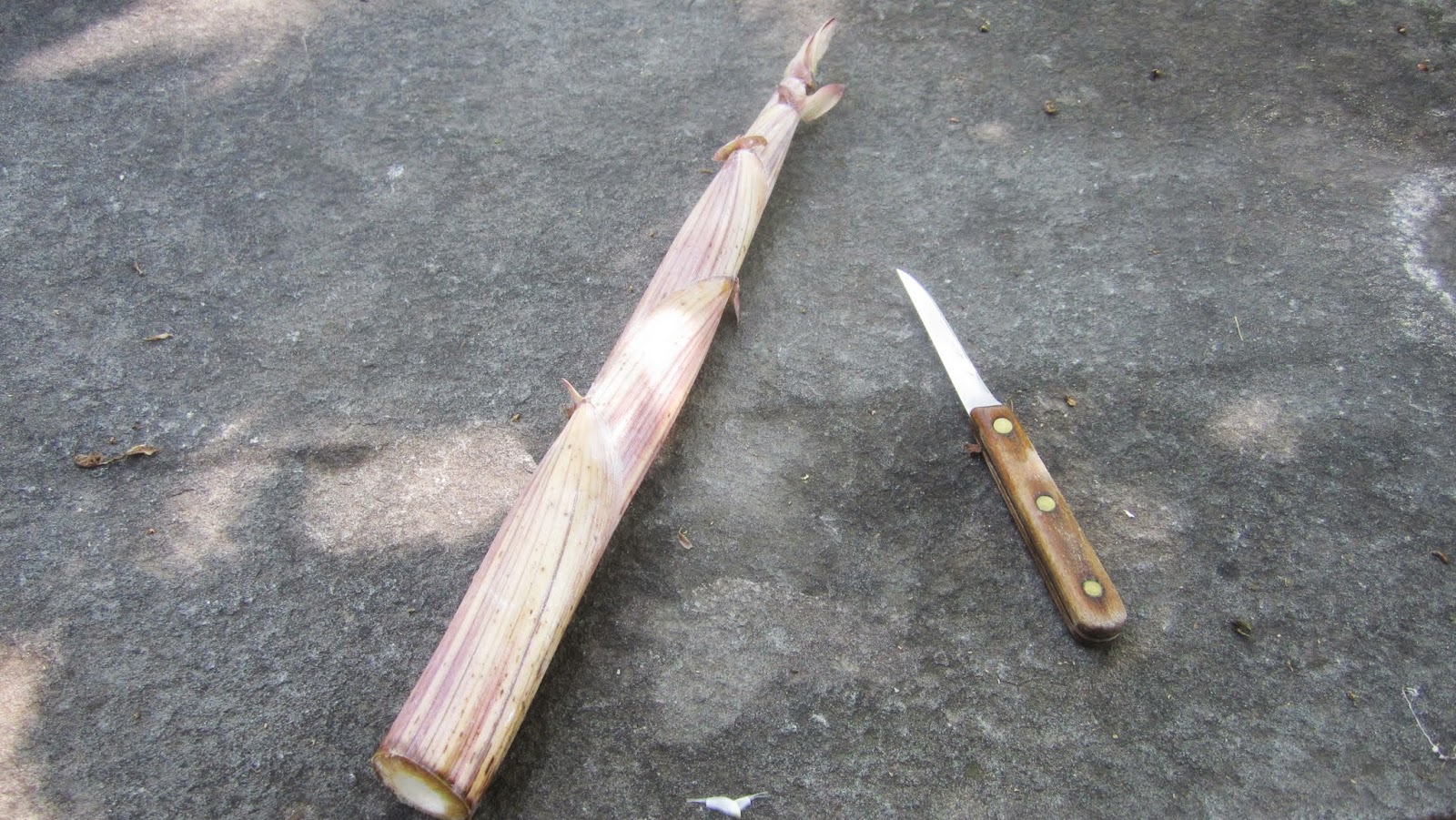 With another neighbor's bamboo continuing to invade our yard, the edibility angle sounded worth pursuing. 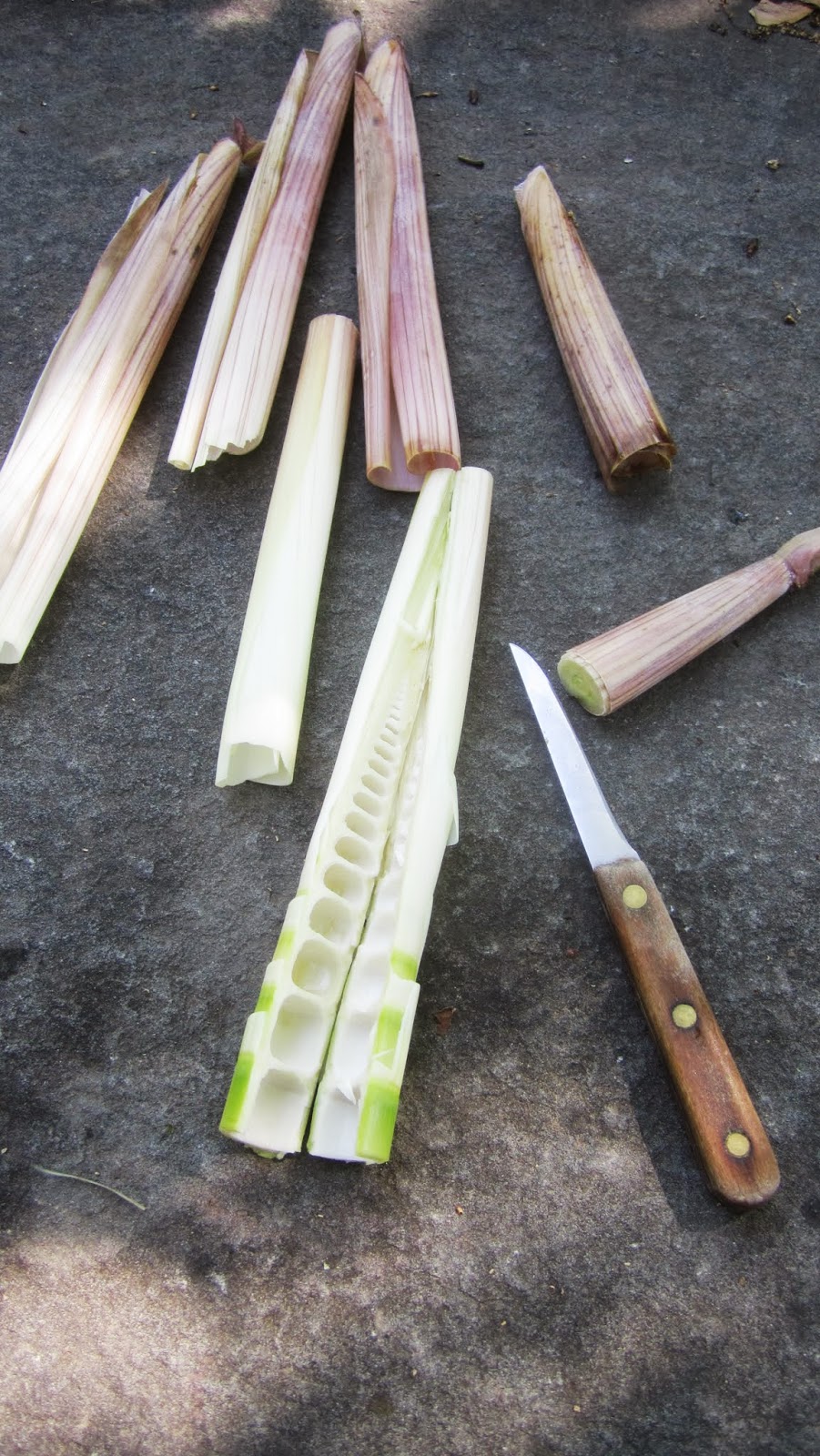 As an experiment, I collected some and undertook a dissection of one on the back patio. Despite bamboo's reputation as a very tough customer (their toughness comes from a combination of silica and lignin), only a few outer leaves needed to be stripped off of the terminal shoot to reach the soft underbelly of this most imperialistic of backyard plants.

The next step would be to start eating, but there were questions. Are all species of bamboo edible? If only some, then is the local species one of them? Does it need to be cooked first? I was not looking forward to cracking a thick tome on grasses and analyzing microscopic features to figure out which of the 1450 species of bamboo I had just harvested. The botanist might become comatose before figuring out if the lemma is comose.

LIABILITY: Fortunately, an article in Mark Twain's old newspaper, the Hartford Courant, popped up in an internet search, telling of a law that passed the Connecticut House of Representatives last month by a vote of 130-3, requiring that "running bamboo" be


"set back at least 100 feet from abutting property. It also requires people who sell or install running bamboo to educate customers on the plant’s growing habits and recommended containment methods. A fee of $100 is prescribed for violators of either requirement.

What is running bamboo, one might ask. Turns out there are two main growth forms of bamboo, running and clumping. Clumping forms are better behaved. I found conflicting information about whether there are clumping species that grow well enough and high enough to provide the sort of screening people look for from bamboo. Here's one of many links. 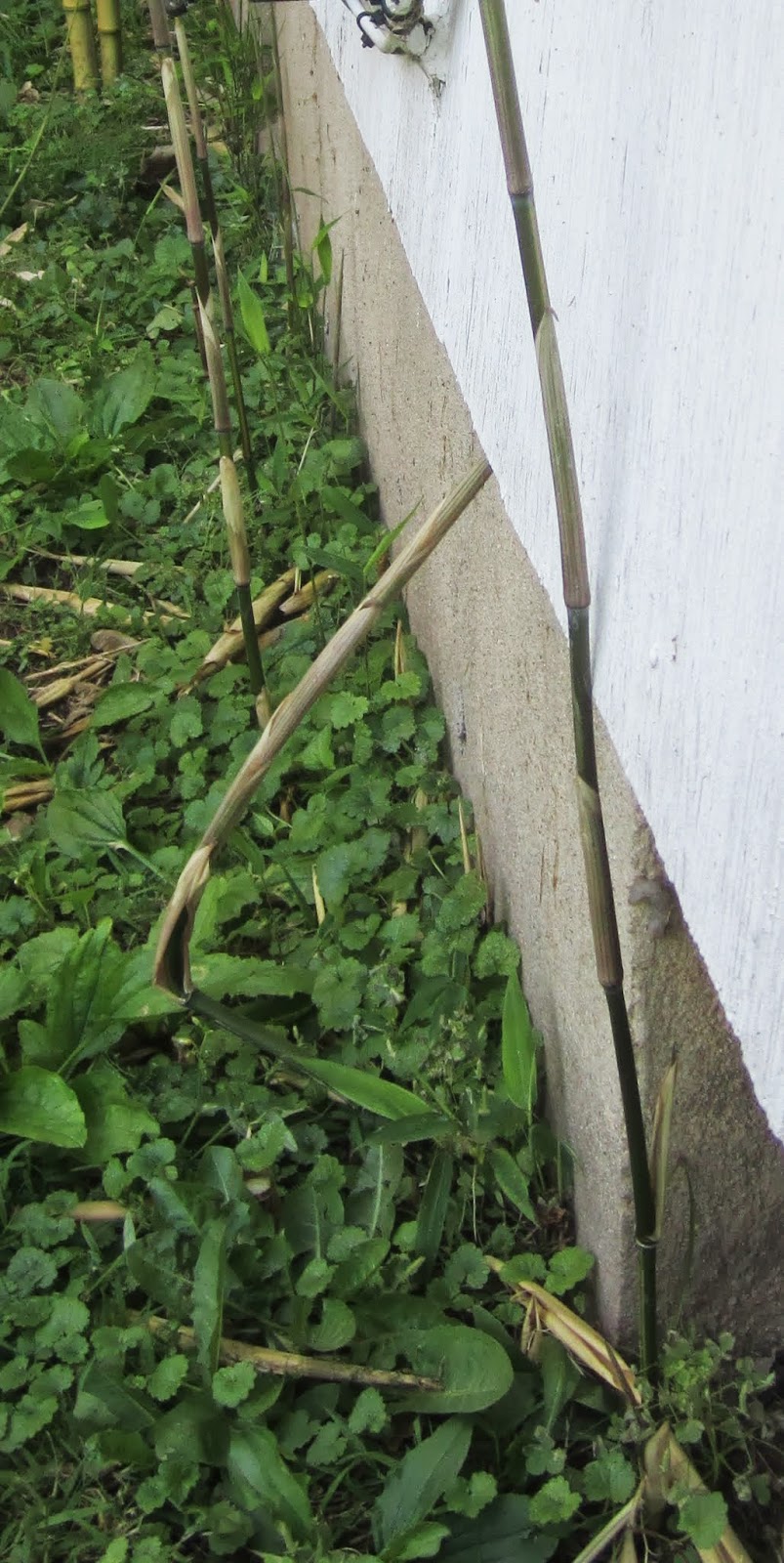 PRIABILITY: The Courant article mentioned Phyllostachys aureosulcata — yellow groove bamboo--which it called "the poster child for aggressive bamboo in Connecticut". Established stands of the species can travel 15 feet underground in a single year. When it reaches a house foundation, it can send shoots up underneath the siding, prying the siding off the house as it pushes upward.

It wasn't hard to find a local example of this. Fortunately, these are slender shoots, but could still do some damage. 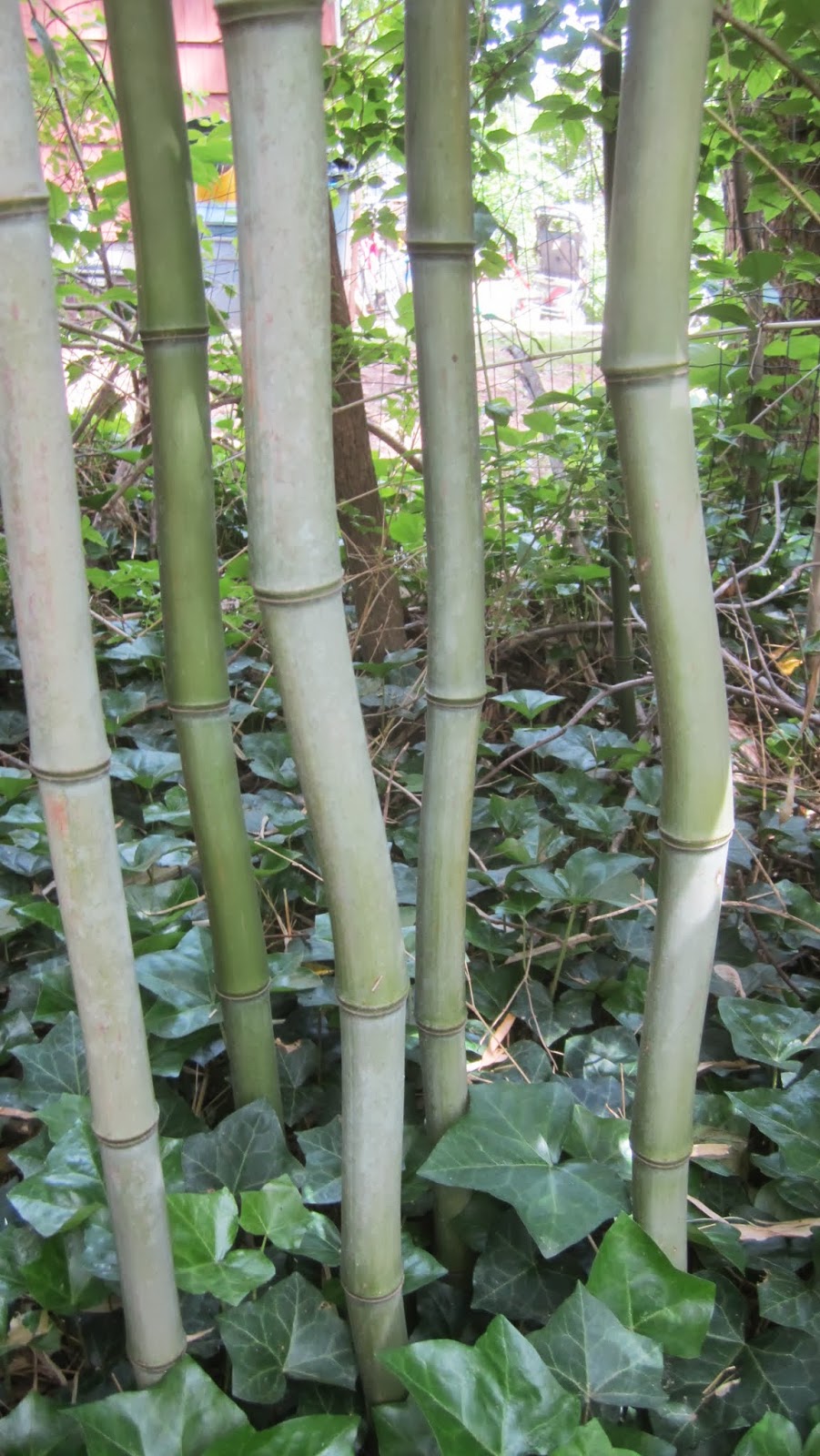 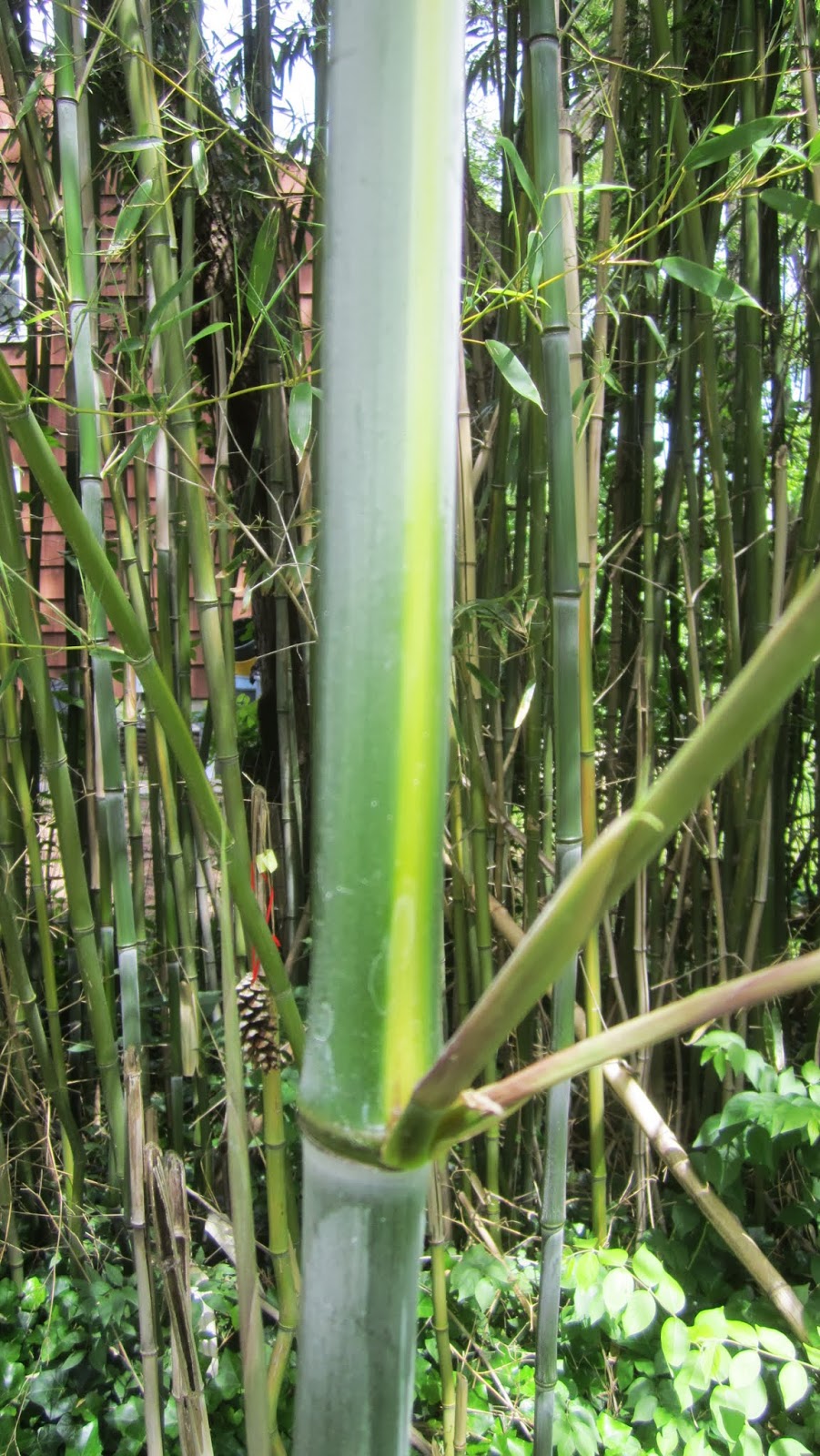 as well as the characteristic yellow groove above the branches.

EDIBILITY: The silver lining in this yellow grooved poster boy for aggressiveness was found in this description of the species: "Cultivated mainly as an ornamental, this species is also among the best for edible shoot production, being free of acrid flavor even when raw."


So, thanks to a chance encounter with a Chinese neighbor, the world has become a more interesting, more edible place. There's still a question as to whether the tips of stems that have already grown several feet high can still be eaten. Though the Chinese man's harvest looked to be from stems already well above ground, this video suggests they have to be harvested just as they are emerging. The color of the flesh should be brown rather than the green said to make older shoots bitter.

Given human nature and the ease of buying bamboo shoots at the store, there's no way that harvesting will solve the problem of bamboo aggression in suburbia. There are other, less edible invasives pouring across fencelines--Japanese honeysuckle, English ivy, ground ivy. Fortunately, none of these threaten to pry siding off of houses or push up through asphalt driveways. Bamboo's destructive capacities make it a pioneer in exploring the liability gardeners may bear for plants that escape from their yards. Regulation is often characterized as an intrusion by government into people's lives, but more often it offers a means of protecting us from intrusion. With all sorts of pollution--biological, chemical, sonic--"freedom to" impinges on a "freedom from". That's something to meditate on while nibbling on some tasty bamboo shoots.

Info about harvesting and preparing: http://agsyst.wsu.edu/bambroc.pdf