A Birthday Climb Up Mount Tammany 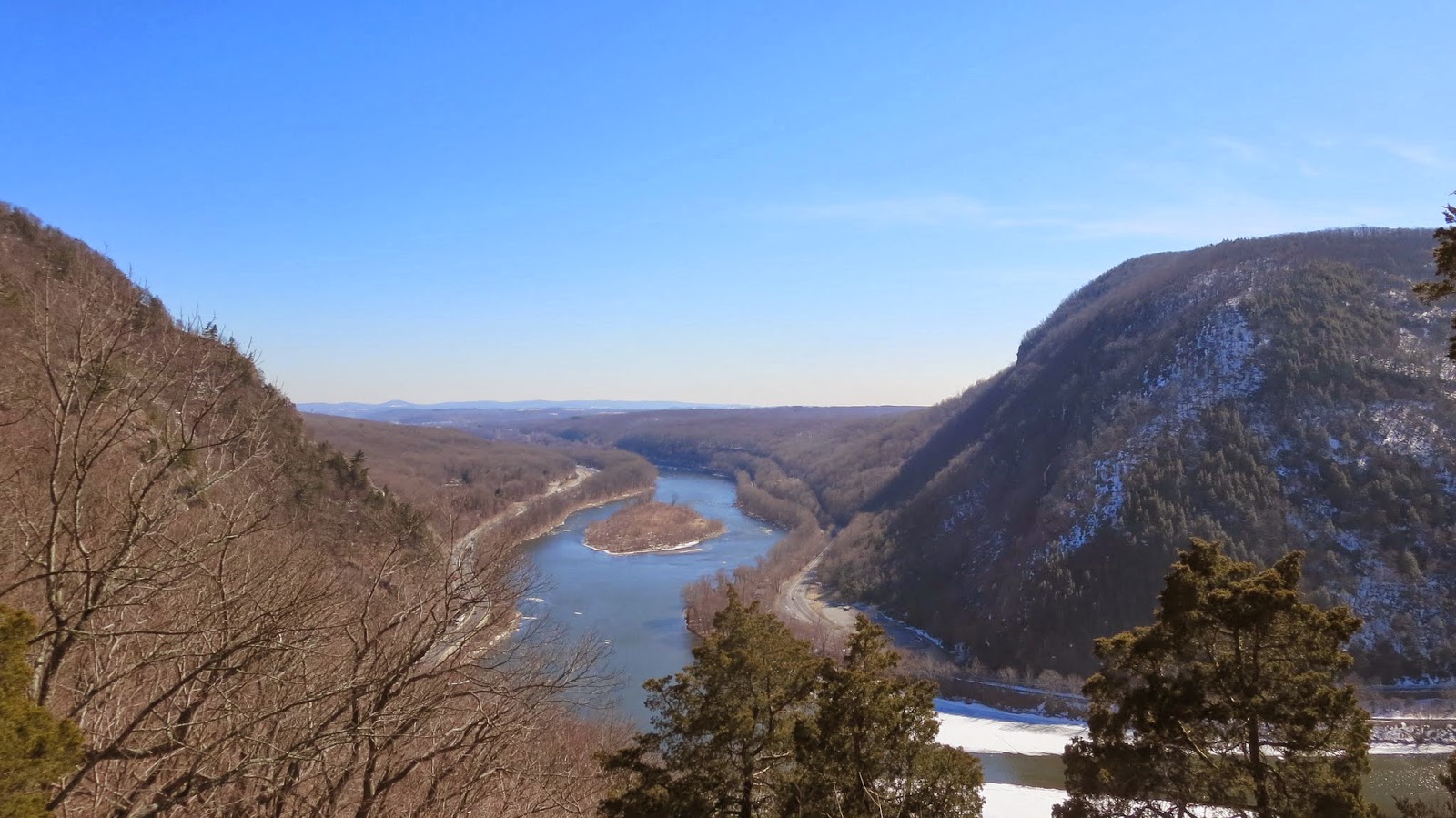 What to do on a birthday? Wanting something more spiritual than material, we decided last month to climb a mountain. The best day to go turned out not to be my birthday but my sister Anne's, who had lost a battle with pancreatic cancer a couple years back. She loved mountains, and had climbed a few in her lifetime, the biggest being a figurative one--making it in the man's world of polymer chemistry. Towards the end of her career, she received a large grant to start an institute whose mission was in part to bring more women into the sciences. She loved gardens, modern art, and hard work, and took the long view--all good reasons to spend her birthday climbing a mountainside, with patches of dormant mountain laurel and blueberries telling of past bounty and future promise, and panoramic views to open our minds up wide.

In New Jersey, there are several mountains to choose from. Baldpate Mountain and the Sourlands close by, and High Point among others to the north. Pyramid Mountain with its improbable Tripod Rock sounded interesting, but we were warned the trails remained treacherous with ice. We ended up choosing Mount Tammany because it has the greatest rise, the steepest climb and the ranger thought the trails would be passable. 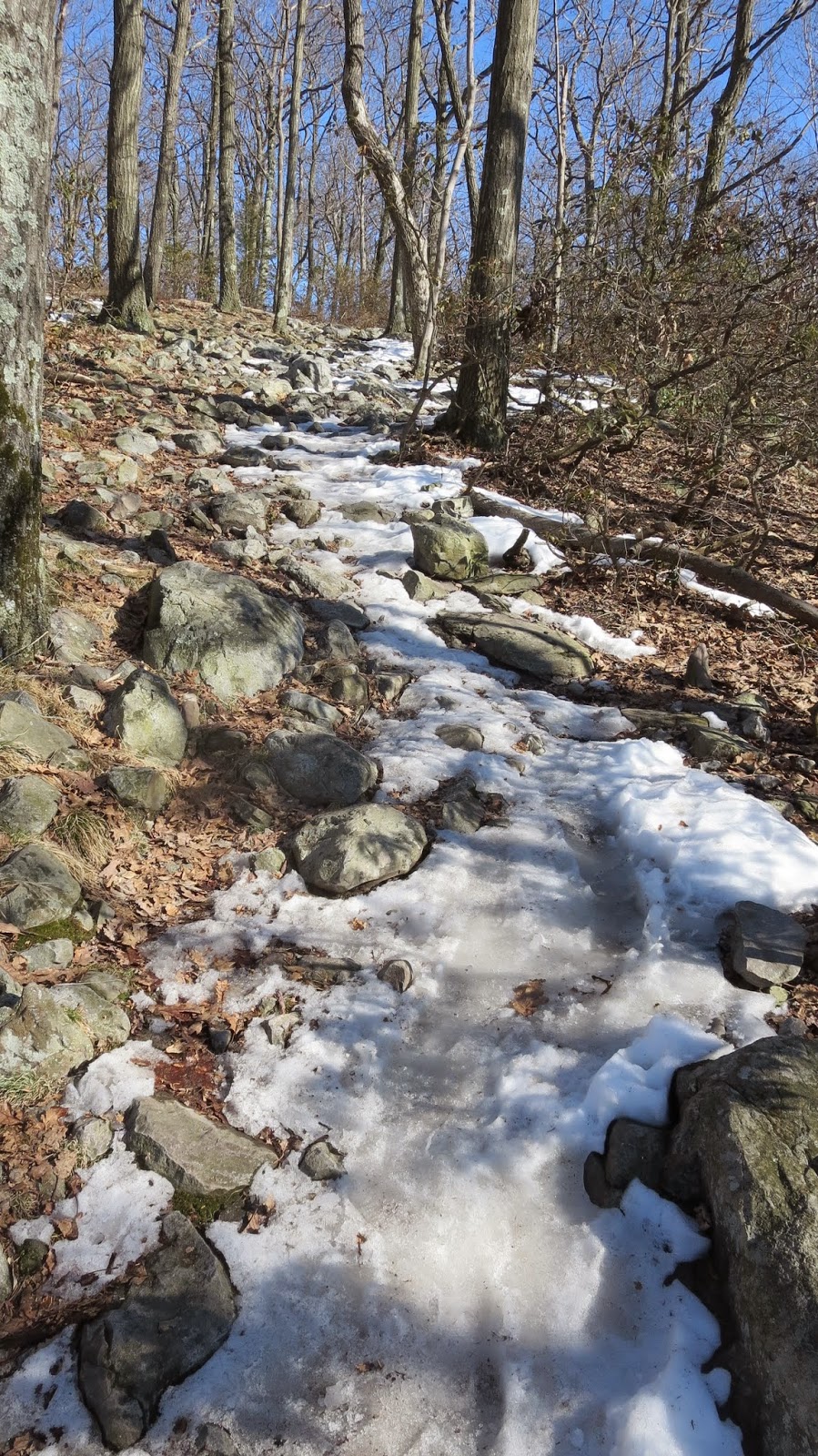 Even though well trod, there was enough snow and ice remaining that we had to step from rock to rock to get traction. 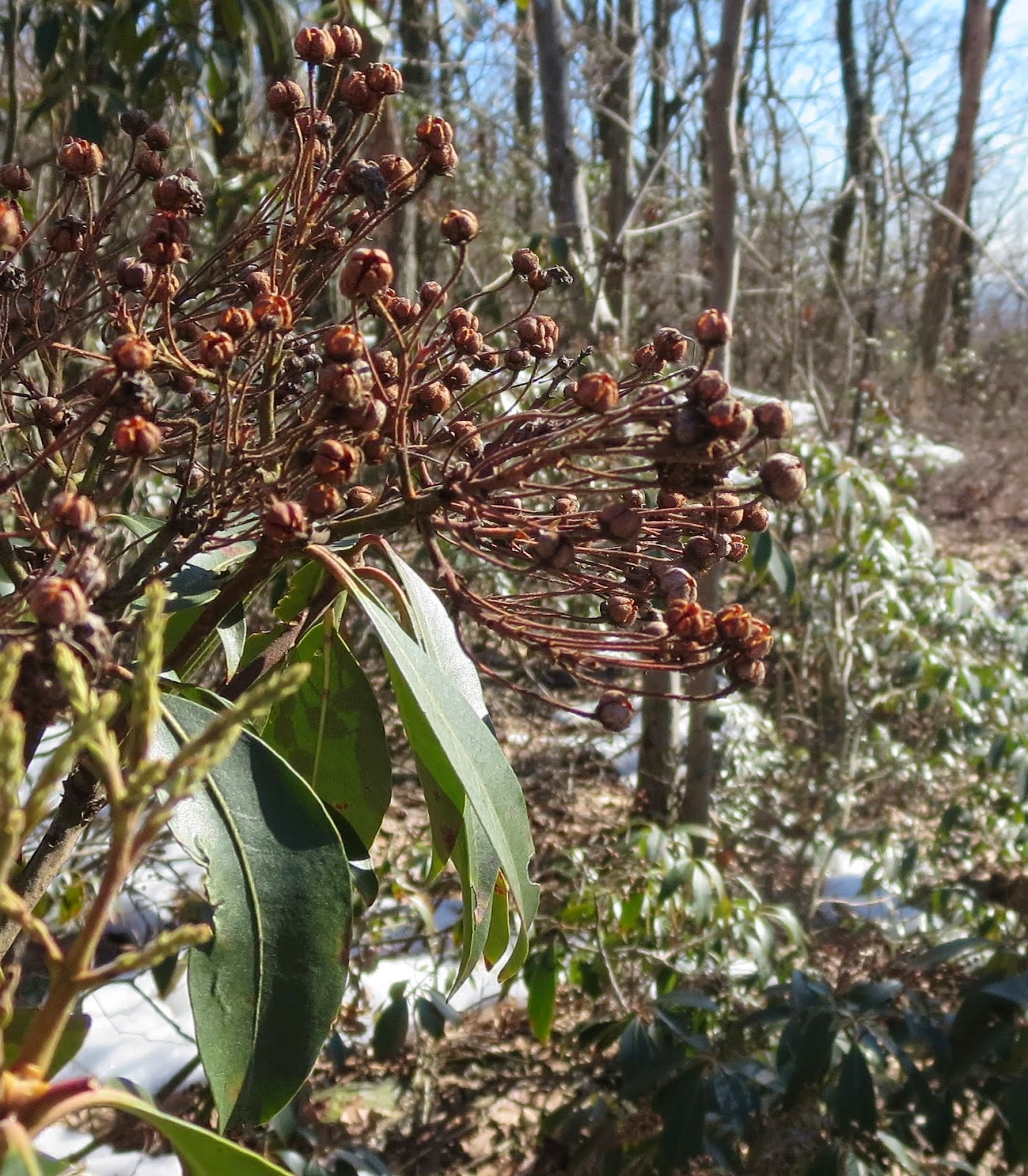 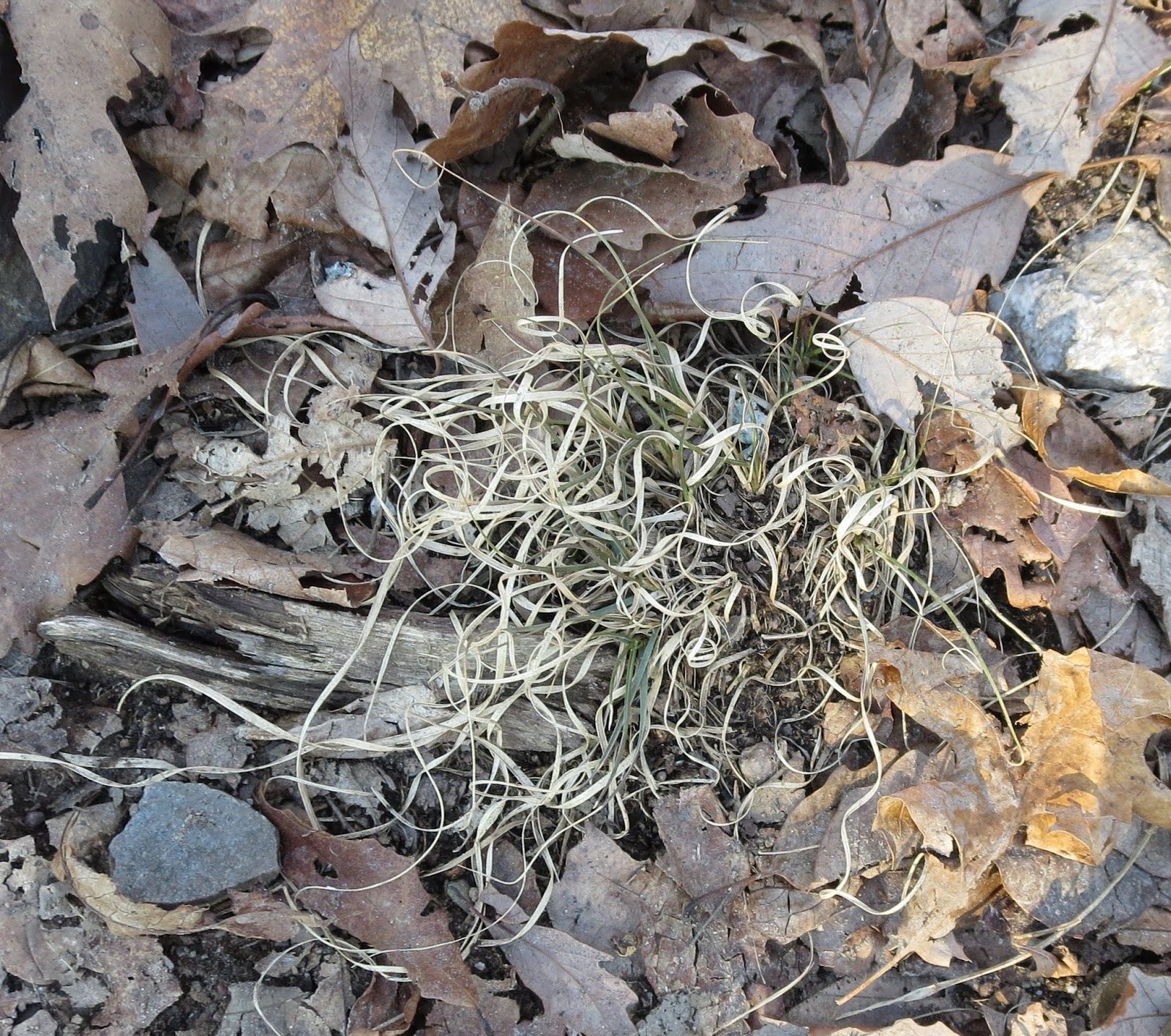 There were small treasures, like the squiggly leaves of poverty oats grass, 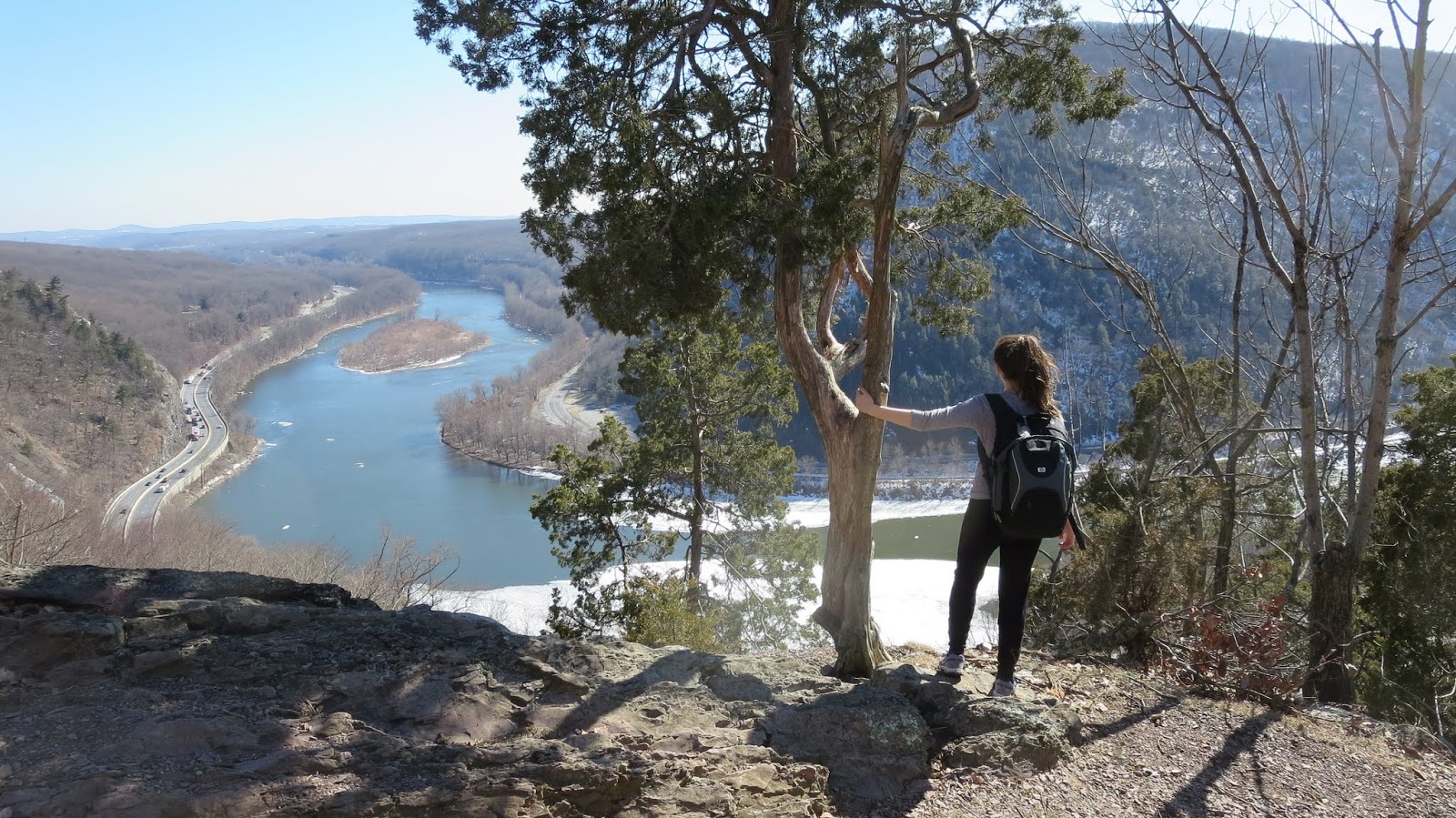 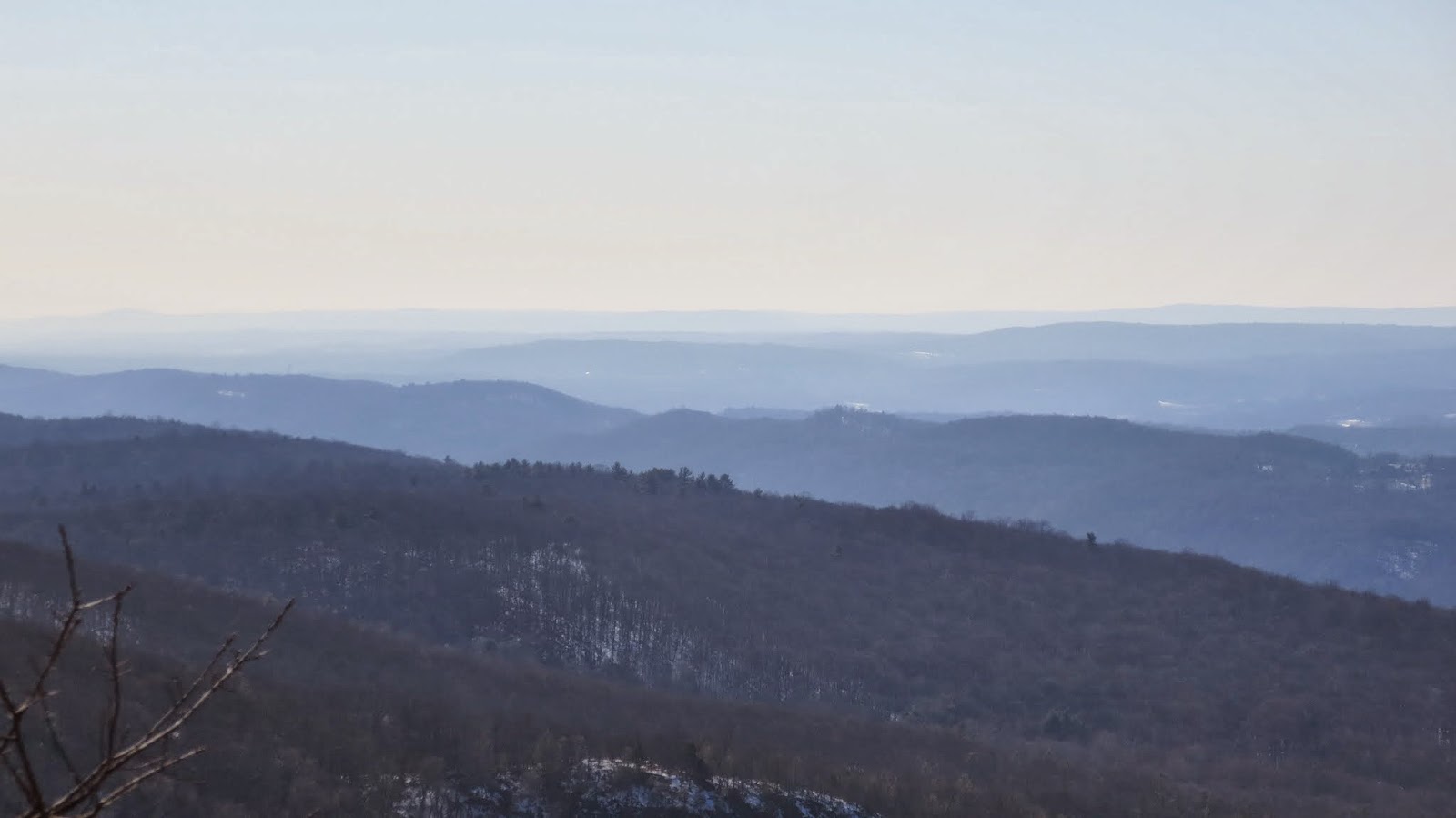 If enough people gazed out upon a view like this, with one ridge giving way to another, on and on into the mist of infinity, America might take more interest in its shared future. 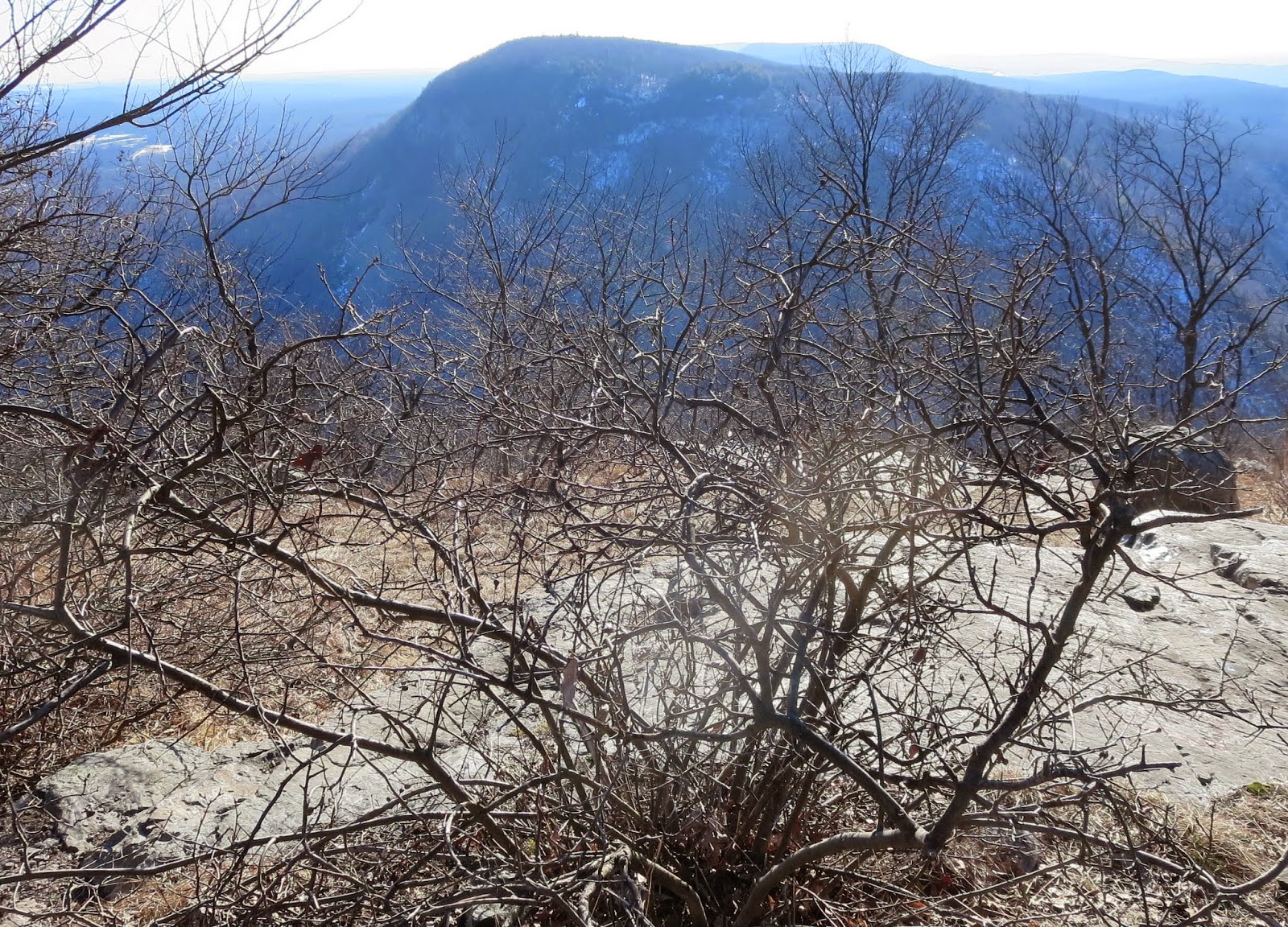 This shrub, growing in the rocky clearing at the top of the mountain, 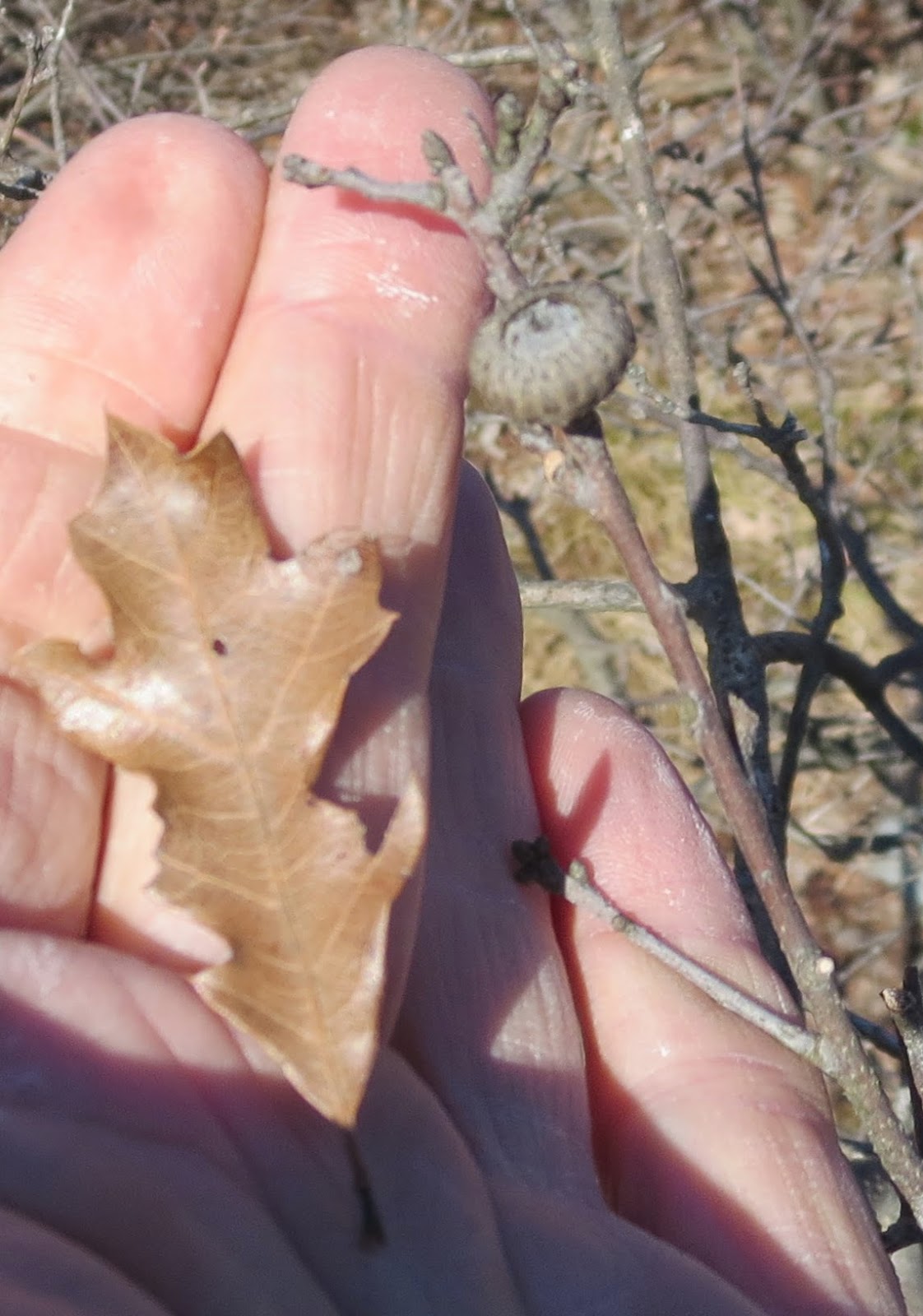 is actually an oak. 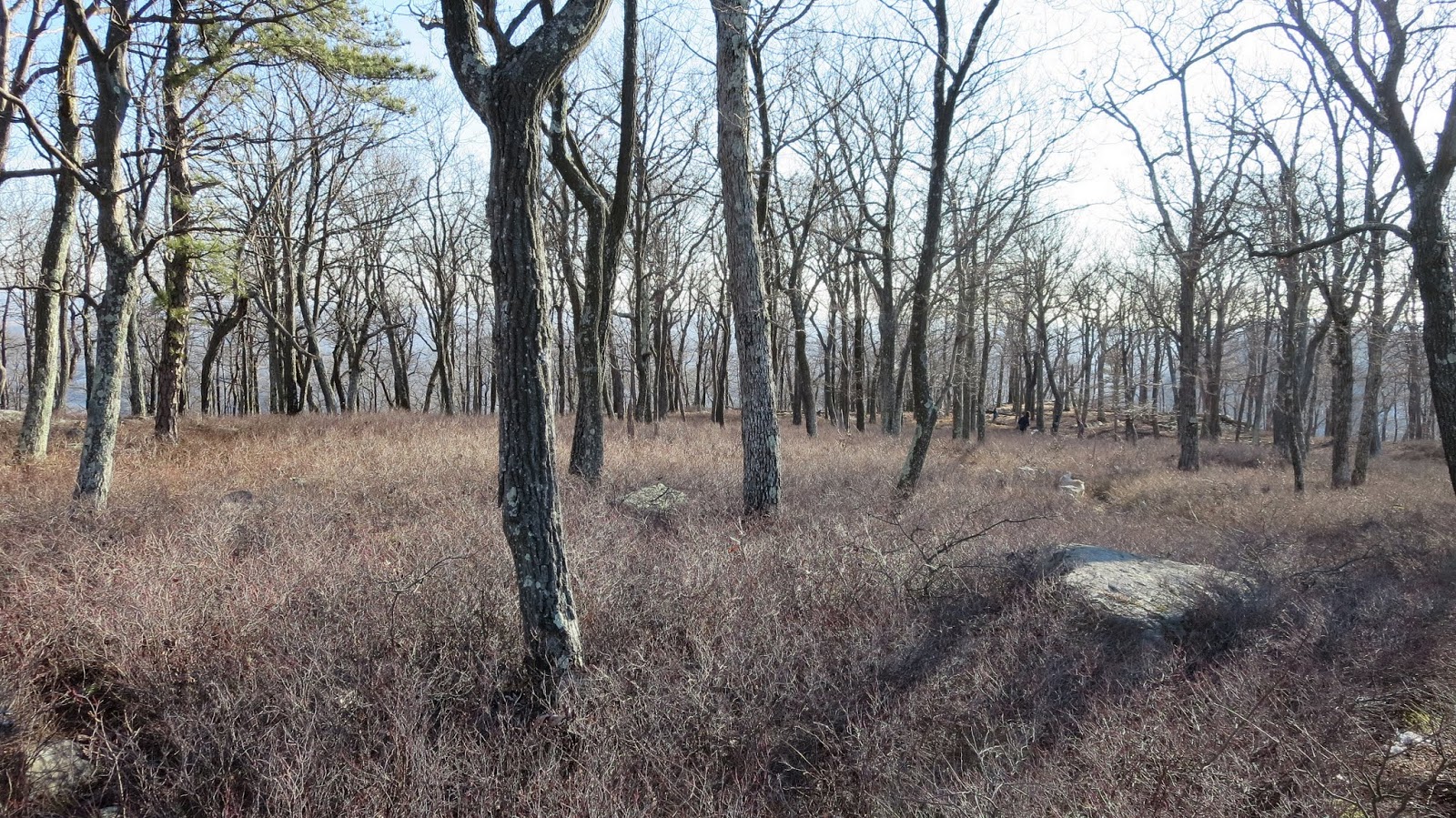 After climbing up on the red trail, we took the blue trail over the ridge and down the other side, through a giant blueberry patch beneath an open canopy of oaks. I imagine that shade-grown coffee bears its fruit in a similarly filtered light in central America. 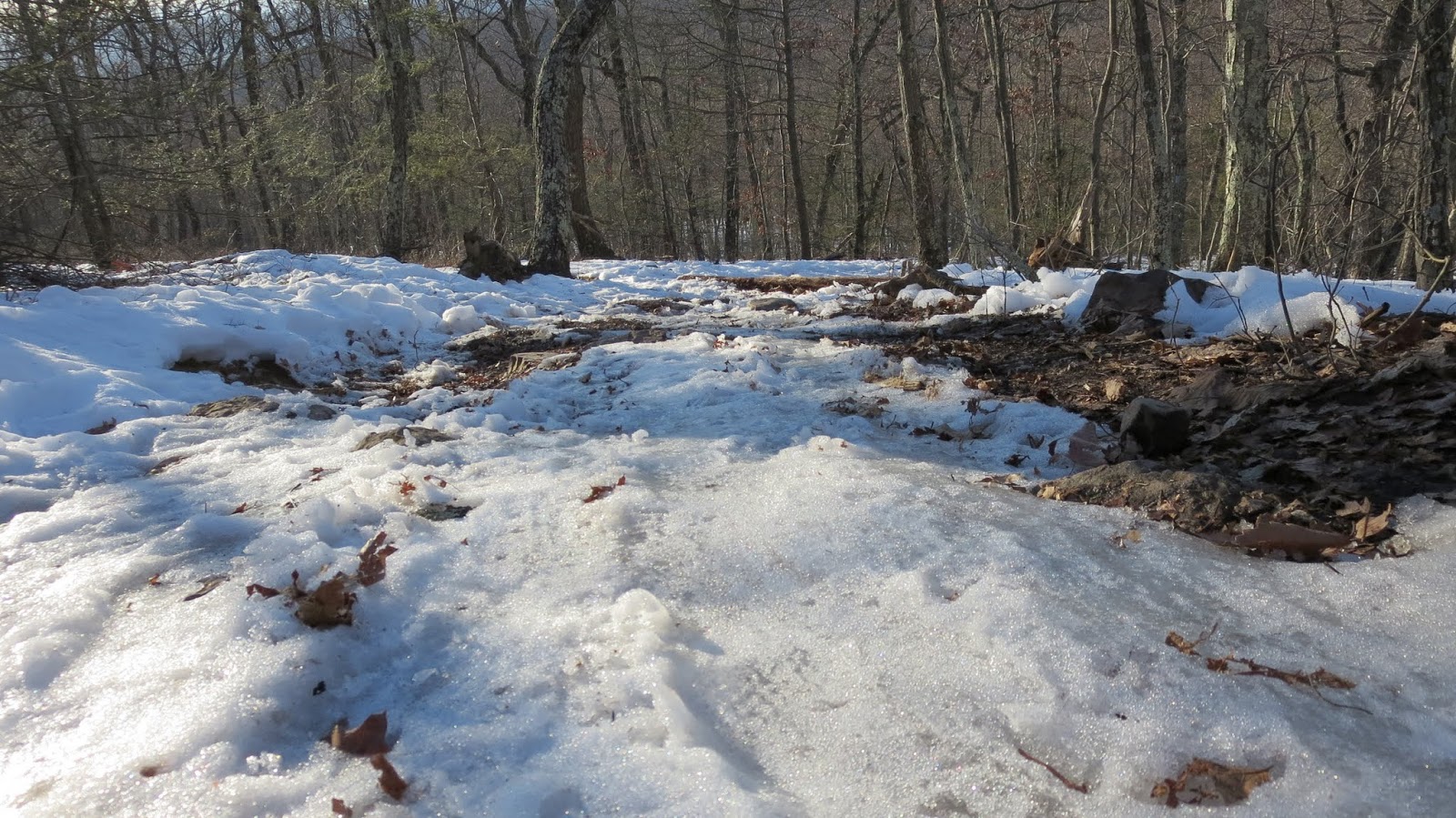 The hike down could have been treacherous if not for soft snow that gave more traction along the edges. On the hardened snow of the trail, finding a safe place to step required keeping an eye on the snow. Subtle variations in the light reflecting off the frozen surfaces hinted which snow would be the least slippery. Somehow during the descent, with each step requiring quick decisions, I found time to speculate on whether this ancient honing of eyesight for the sake of survival finds modern application in the appreciation of how light plays on a canvas or a photograph. 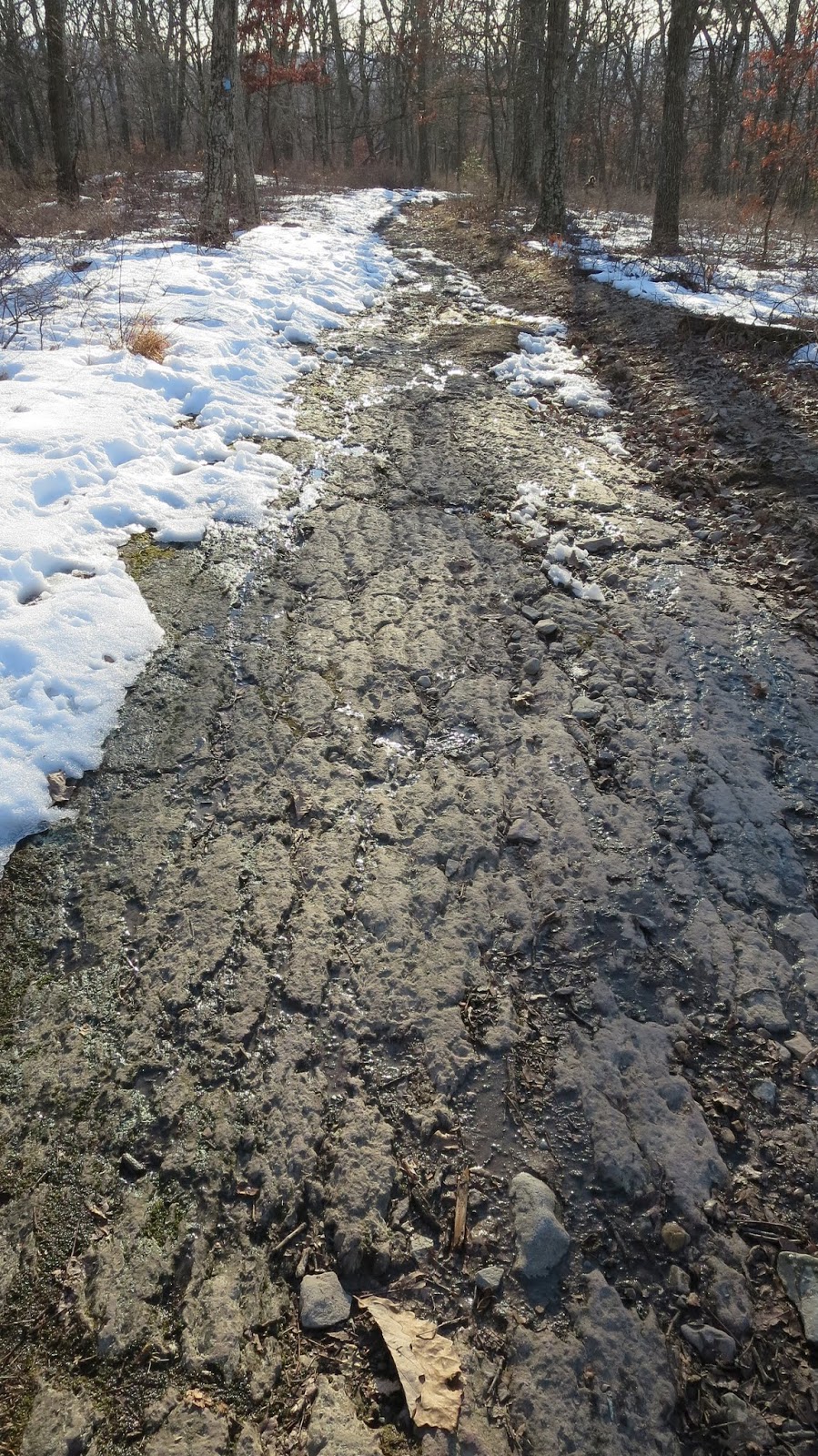 Linear etchings in the rock suggested past presence of glaciers. 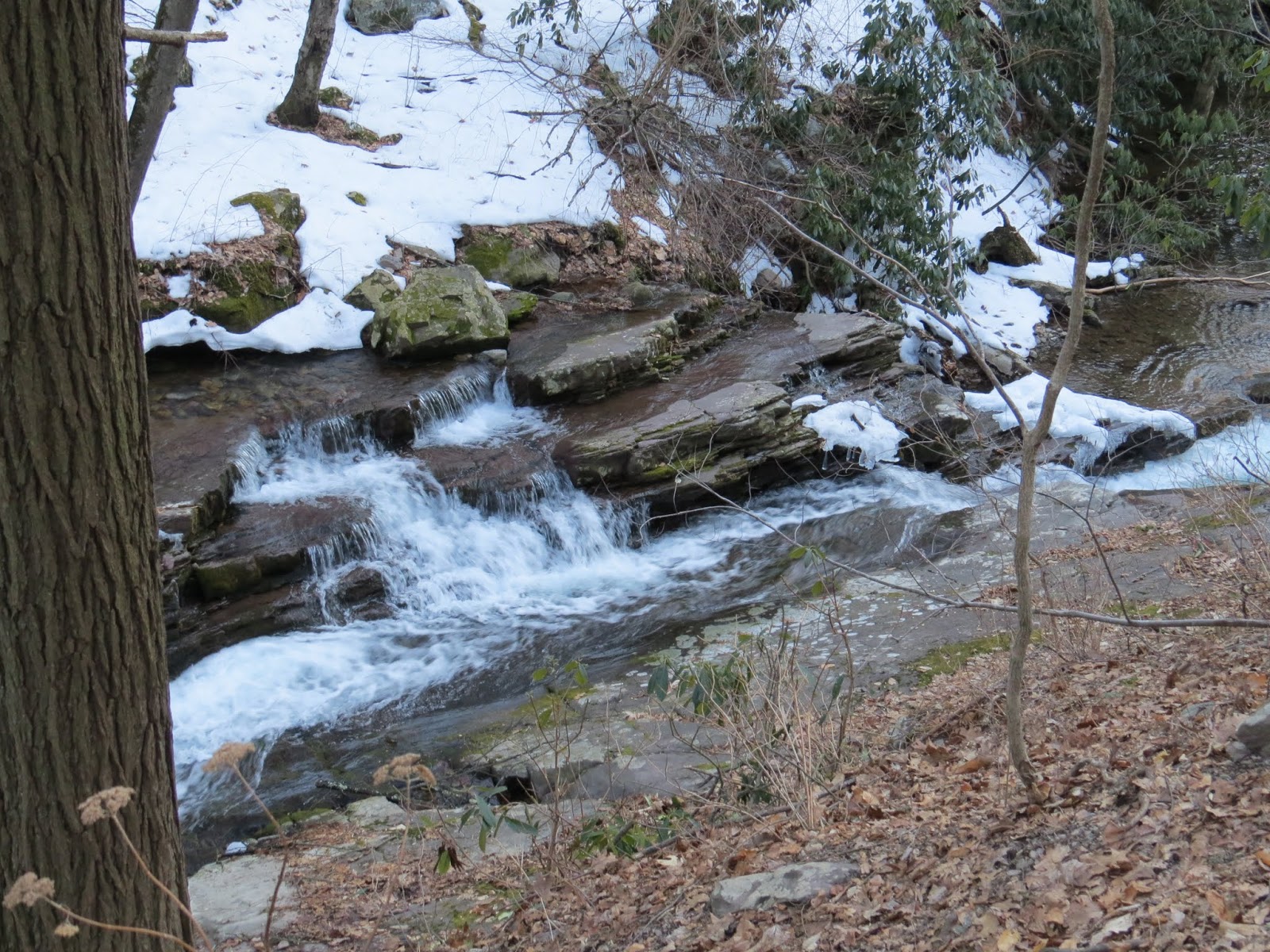 One of the blue trail's rewards is a beautiful stream leading down a valley to the parking area. 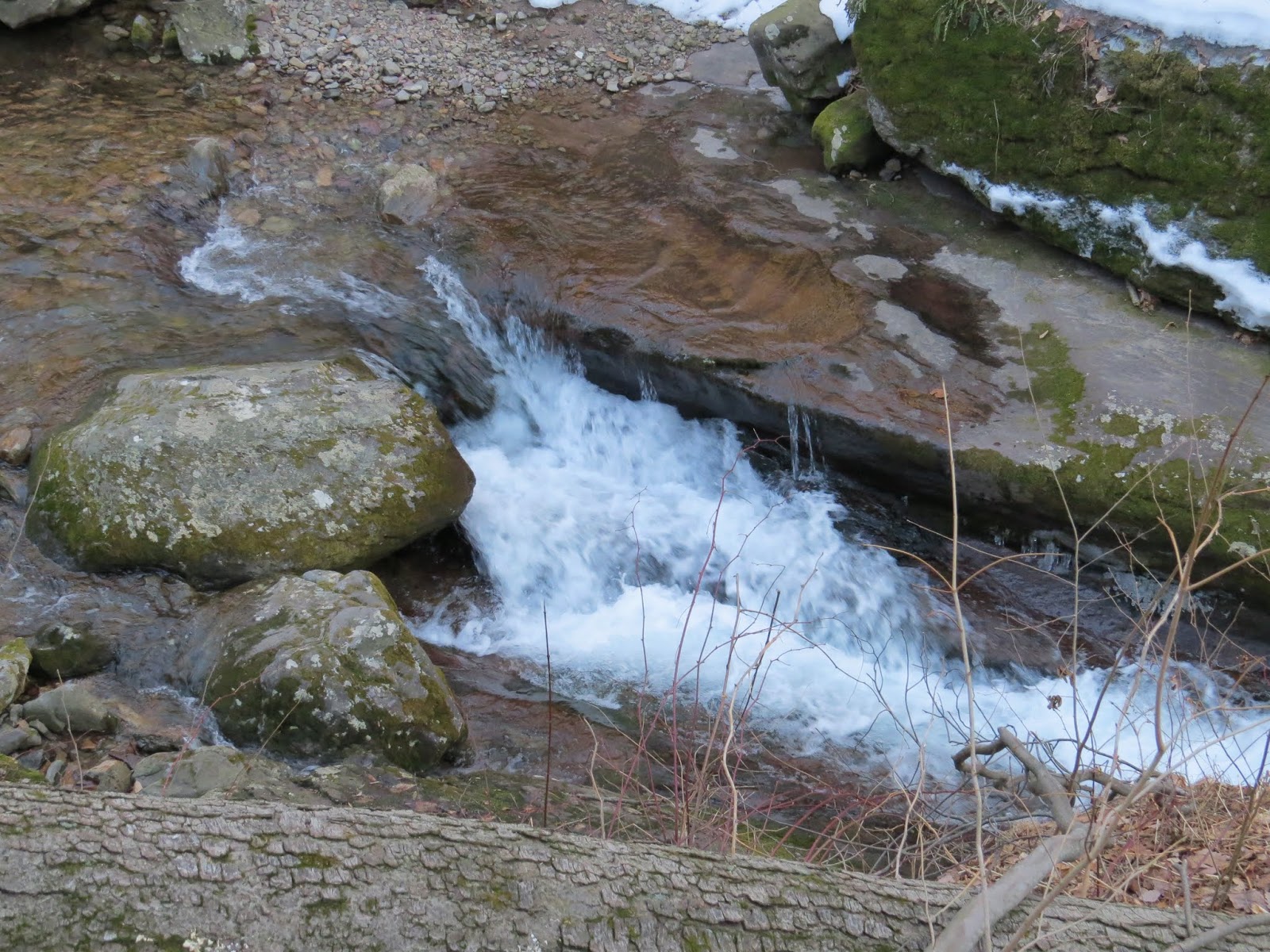 Here's a good natural representation of what in stream restoration is called a cross vein. The rocks, shaped like a "V" pointing upstream, focus the water's flow inwards to create a scouring action that over time scours out a deep pool. Constructed examples of this can be found in Princeton University's stream restoration just down the hill from the new chemistry building. 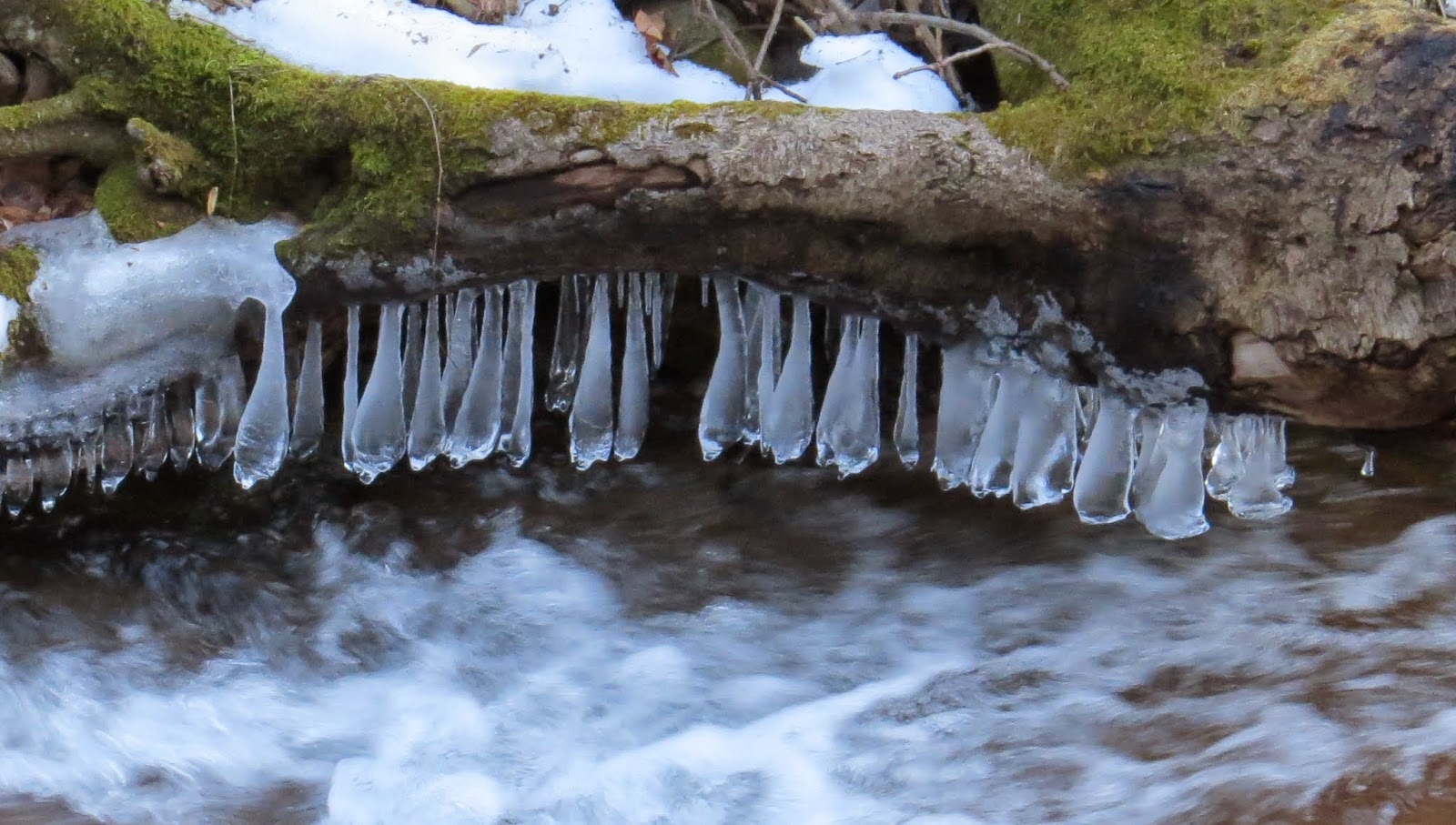 Icicles of many shapes decorated the streambank, like frozen tears suspended above the water's flow.
Posted by Steve Hiltner at Friday, April 18, 2014