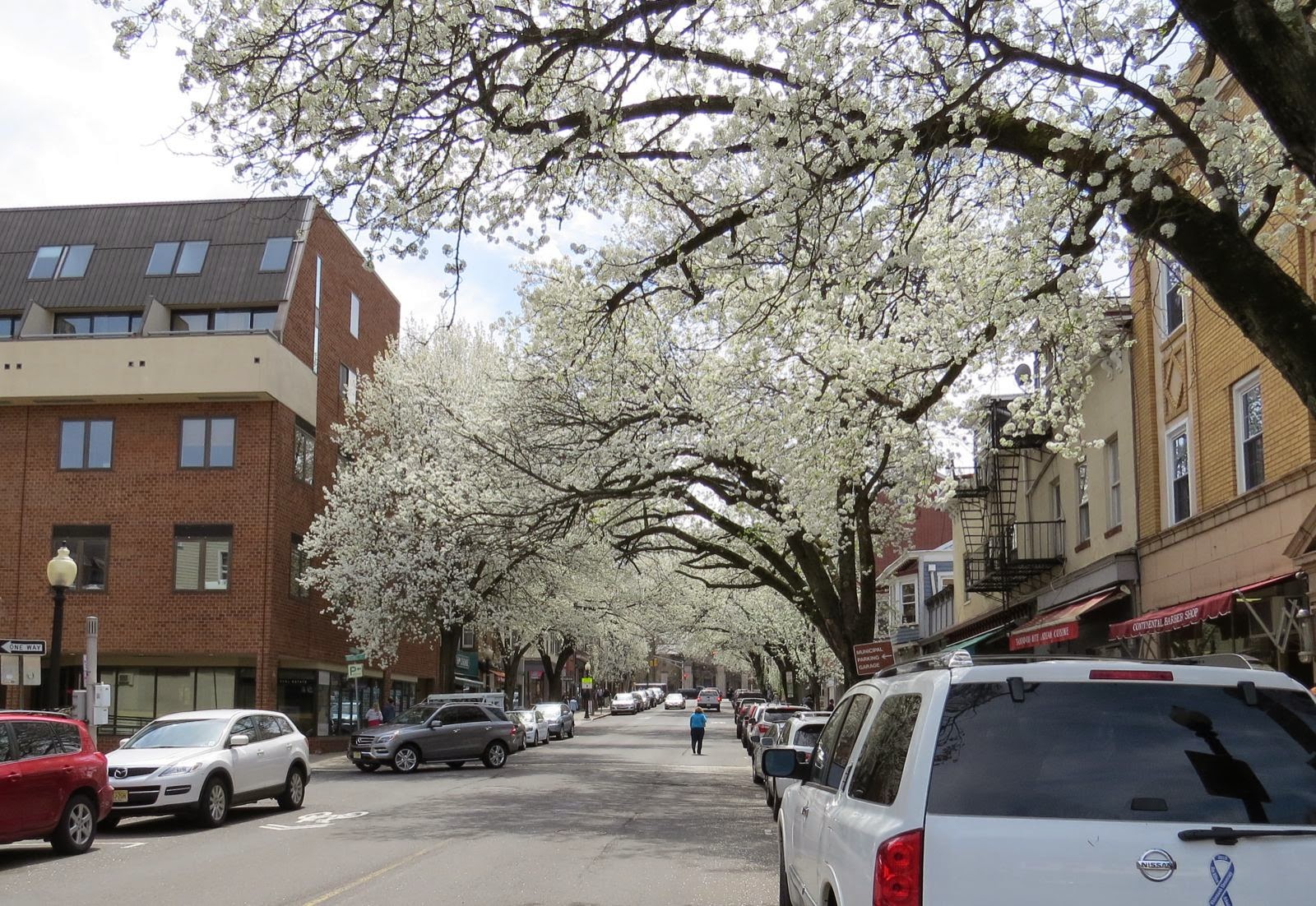 Callery pear, widely known by one of its cultivars, Bradford Pear, is a good example of how appearances can deceive. People crave blooms after a long winter, and callery pear comes through with its masses of radiant white flowers that look like someone turned on a giant 100 watt lightbulb in the landscape. Though it originally was thought not to spread, callery pear has been popping up along roadsides across the U.S., looking as if someone strung masses of Christmas tree lights along the highways. The visual effect is pleasing at a time of year when most of the native species are just coming out of dormancy and the landscape still looks otherwise drab.

At that superficial level, which is how most people see the landscape, the callery pear seems an unmitigated blessing. People who plant it would seem to be doing everyone a favor, as the tree's beauty spreads far beyond the original planting. The specimens on Witherspoon Street in Princeton lift the spirits of passersby, and are celebrated as harbingers of spring by the local newspapers.

At a deeper level--if you take a look underneath the ecological "hood", peak behind the visual soundbyte--you'll find the story is the complete opposite. The rapidly proliferating callery pear poses a profound threat to America's landscape. Across the country, callery pear is spreading rapidly into forests and fields, displacing native species and steadily imposing a monotonous conformity. It was originally imported from China specifically for its adaptability to a wide variety of soil types and moisture and light levels, produces abundant fruit that starlings spread across the land, and so can quickly invade a broad spectrum of habitats. The website naturalbiodiversity.org calls it a "bio-bully". A county in Indiana suffering from an advanced stage of invasion calls the callery pear "a bad, bad plant with pretty flowers." This lovely flowering tree is like the celebrated town figure who, unbeknownst to the local citizenry, has been running a seedy operation on the outskirts of town. 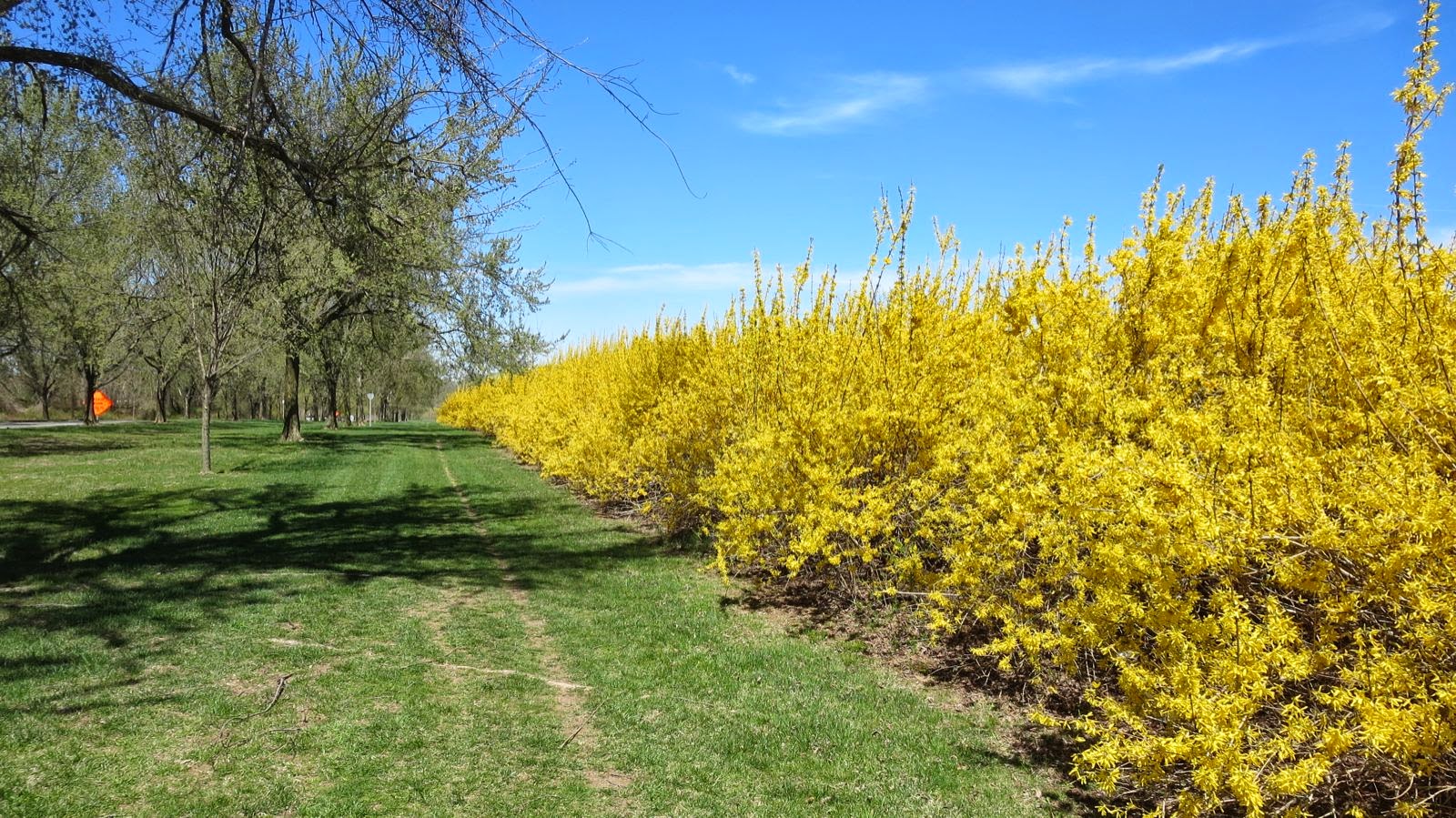 Just to be clear, aspersions are not being cast on all non-native plants. Whatever you think of the exotic forsythia (this imposing hedgerow runs parallel to the American elms along the Washington Road entry into Princeton), it has not become a menace to woodlands and fields. It may offer little to wildlife other than cover, but it stays where its planted.

Callery pear, then, is a symbol of the time in which we live, when the present is in deep conflict with the future. This is a time when that which is much loved and enjoyed, and which appears on the surface to be completely benign, is quietly working beyond most people's awareness to dismantle our cherished inheritance. How does one convey this to people without seeming to be a killjoy? Such knowledge, by threatening our enjoyment of the world we've made, poses an emotional challenge that people are left largely unprepared to handle. Is there a way to still experience the simple pleasure of a callery pear's beauty while at the same time understanding that they collectively pose an extraordinary danger? The same challenge awaits anytime one climbs into an automobile, needing to get somewhere yet knowing that collectively the use of cars is destabilizing our climate. Some means of handling cognitive dissonance, preferably not complete denial, is necessary just to get through the day.

Only by making these connections, and coping with the responsibility they imply, can towns like Princeton step out of a pleasant bubble and begin to question the way we unwittingly contribute to massive changes underway beyond our borders.

As we collectively remake the world, there are other impediments to our understanding these connections between individual acts and collective impact. One is the notion that nature is in control, that if I plant an invasive species, anything it does after I plant it--spread into the neighbor's yard, or into the local preserves--is in nature's domain and not my fault. There is also the belief that nature will eventually mend itself--a capacity being severely tested. Perhaps the most interesting impediment is a skewed notion of what constitutes freedom. The increase in one freedom can lead to a precipitous drop in another. For instance, the freedom to buy and plant highly invasive species like callery pear essentially consigns the larger landscape to the tyranny of invasion, and deprives future generations of the freedom to enjoy the beauty of a diverse native woodland or field, and the wildlife that needs a diverse food supply to thrive. On a small scale, many of us are forced to deal with ongoing invasions of english ivy or bamboo from neighboring yards. What are the property rights of those being invaded?

This is the less than lovely backstory on a lovely display of flowers on Witherspoon Street in April.

Note #2: A quick and fascinating primer on callery pear can be found at this link. There is also a very informative webinar that just came out, combining an appreciation of the callery pear's beauty with an objective discussion of how it is spreading, and why. Below are instructions on how to navigate to the presentation by researcher Theresa Culley:


"Last week, the Midwest Invasive Plant Network held our first webinar on Invasive Plants in Trade.  We had some technical difficulties at the beginning of the presentation, but we did manage to record Theresa Culley’s talk on Callery pear.  The recording is now available at the following link: https://gomeet.itap.purdue.edu/p67o689ypt4/. After the first minute, the recording goes silent.  Skip ahead to minute 15, and you’ll be able to hear the full presentation.  Make sure your computer’s speakers are turned on to hear the audio portion."