Round about Mother's Day, my friend Karla received this email: "Lonely apple tree seeks similar for discreet short-term relationship. Afternoons preferred." Just in case there was any misunderstanding, some explanatory text was added: "My tree is blooming, for the first time; is yours? If so, can our trees make a date? Warm regards." 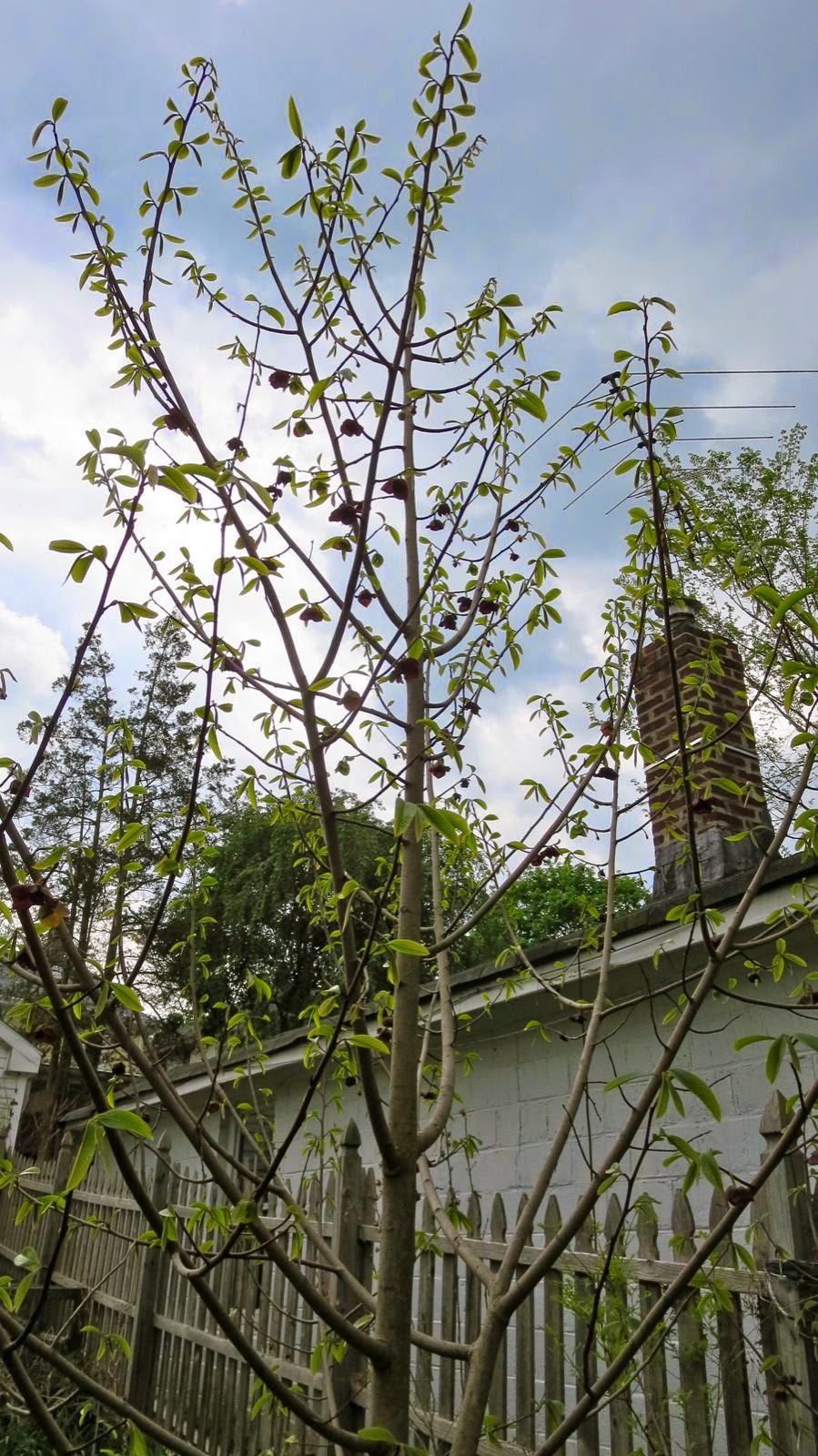 As it happened, her husband Steven was headed that very day to South Brunswick on a related mission, in search of pollen to satisfy the fruiting needs of another kind of fruit tree, the solitary pawpaw planted in their backyard some years ago that was now in full bloom. Though it had sprouted an additional trunk, it was still lonely, genetically speaking, and unlikely to set fruit unless visited by pollen from another pawpaw patch.

Thrust into the role of pollinator, Steven found himself at a distinct disadvantage. He had neither the wings to search the greater Princeton area for other pawpaw trees, nor sufficient olfactory apparatus to detect the subtle carrion-like odor pawpaw flowers use to attract pollinating flies. And since Google Maps does not (yet) provide directions to New Jersey's pawpaw patches, the search for prospective pawpaw mates required considerable research savvy. Even upon arrival at the best prospect he could find, the orchards at Rutgers, he still required the kindness of strangers to find the pawpaws amongst all the other fruit trees in the no-doubt vast plantings at Cook College. 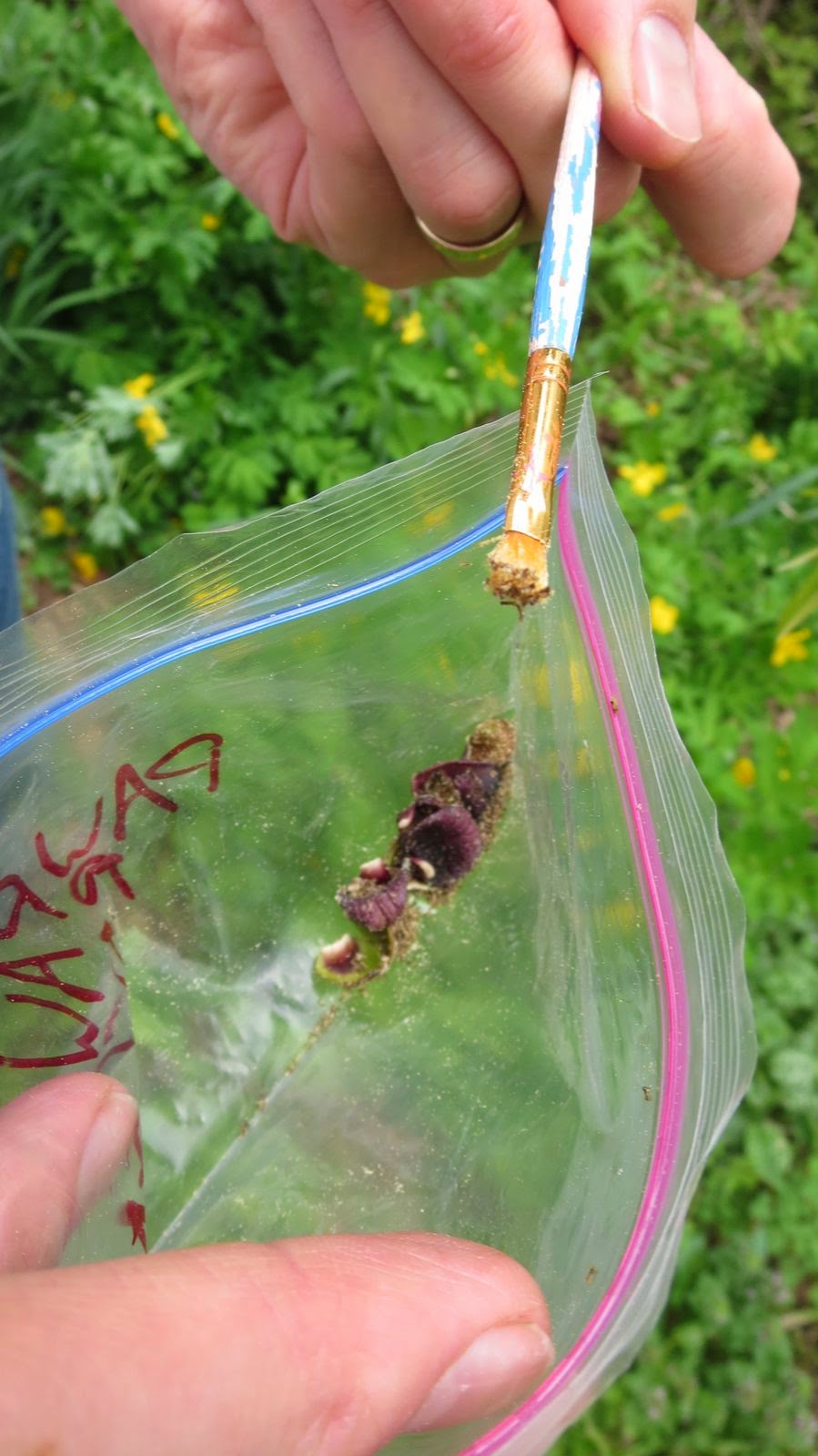 This sort of matchmaking is becoming more common as the local food movement, perhaps abetted by backyards made sunnier by tree-toppling storms in recent years, prompts the planting of solitary fruit trees in cloistered backyards--peaches, apples, cherries, figs, persimmons, pears, and the occasional pawpaw--all with uncertain prospects for leading a healthy, promiscuous life of cross-pollination.

For those who know pawpaws only from the childhood lyric about a "pawpaw patch", they happen to be a native understory tree in the Annonaceae--a family of mostly tropical species. One relative of pawpaw grown by the Incas is touted as perhaps "the greatest fruit on the planet", with a taste combining mango and banana. Pawpaw, adapted to the north, offers a chance to grow tropical tastes in cold climes. Though delicious, its shelflife is short, which has thus far limited the pawpaw's commercial potential.

Thanks to the internet, I now know that the "way down yonder in the pawpaw patch" phrase that I've been carrying around in memory all these years comes from a boyscout song. I did not personally reach the status of boyscout, having earned my bobcat, wolf and bear badges in cubscouts only to lose momentum during a leadership void in that critical transition from cub to boyscout. The transition is called webelos, which stands for "we'll be loyal" scouts, a molting process that not everyone successfully completes.

If I had, I might have learned the complete lyrics for Pawpaw Patch, and known that "way down yonder in the pawpaw patch" answers the musical question "Where oh where oh where is Susie?" It matters where Susie is because she happens to be the "queen of Hawaii", which goes with the pawpaw's tropical family roots. If you ever go to Hawaii, you may encounter some of pawpaw's relatives, like the ylang ylang, soursop, and sugar apple. However, according to the song, you needn't go way down to Hawaii, because Susie will teach you to hulu way down yonder in the nearest pawpaw patch. If not completely distracted by Susie's hulu tutorials, the astute boyscout will note that "way down" and "patch" are descriptively correct, because the pawpaw tends to grow in rich bottomlands, and forms clones from its spreading roots.

There's another lingering pawpaw-related mystery knocking around in my memories. In my parents' Michigan backyard in the pre-internet 70s, a pawpaw sprang up spontaneously one year, grew into a patchlet of several stems, and after a few years began bearing flowers and a few fruit the size of a small mango. Where the pawpaw came from is a mystery, as was its capacity to bear fruit, because there was no known patch nearby, and the seeds looked much too large to navigate a bird's digestive tract. We didn't ask questions, however, because they were delicious. A bit of pollination assist with a cue tip may have helped with yield one year, which the raccoons and squirrels were grateful for.

Steven's recent research, empowered by the internet era, has delved far more deeply into the sexuality of a pawpaw. Way up yonder in this pawpaw post is a picture that Steven sent me of two pawpaw flowers, the green one not yet having acquired that lovely burgundy hue that flies are supposed to mistake for dead meat.

If a pawpaw flower were able to speak to its sexuality, it would say something like "I was female before I was male." Here to the left is a male flower, which is really a female flower a few days later. Looking closely, you can see a subtle difference. There are now yellow (male) anthers surrounding the green dot in the center (female stigma). The logic is that the anthers on any particular flower open up as the stigma is closing down, thereby preventing a flower from pollinating itself.

But that logic suggests that a tree with flowers in different phases could in fact pollinate itself, with pollen from one flower spreading to the next, and make fruit without importing pollen from elsewhere. 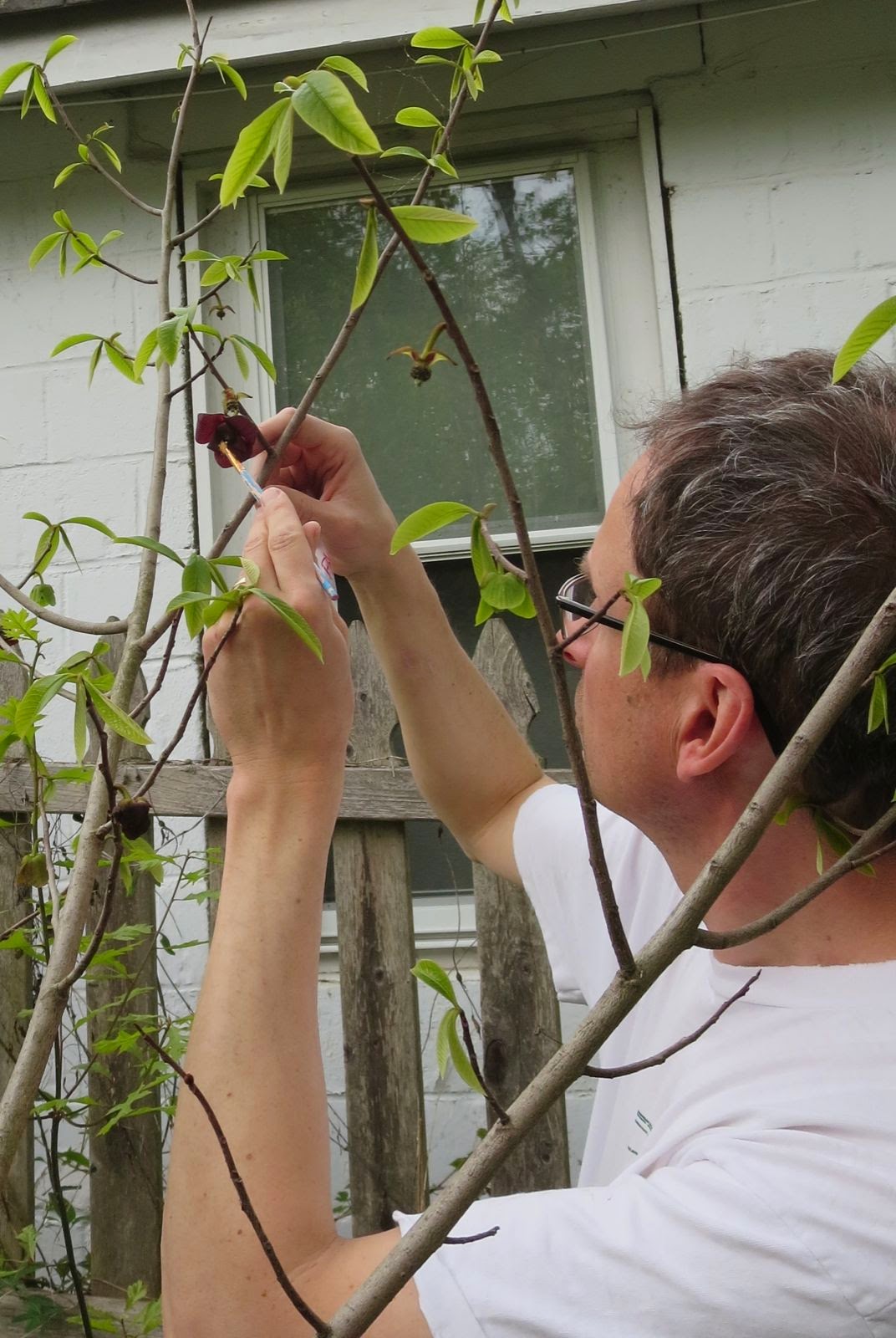 Still, the available information suggests that it helps to have cross pollination from one pawpaw patch to another, and that human-assisted pollination is often needed to make up for a lack of interest among the local flies.

Next year, Steven won't have to travel to South Brunswick in search of a "house of reputed pawpaws", because by chance I found a fine potential mate in the backyard of another friend, behind the Jewish center just a quarter mile away. It's a splendid specimen, thirty feet high, sporting perhaps a thousand flowers. 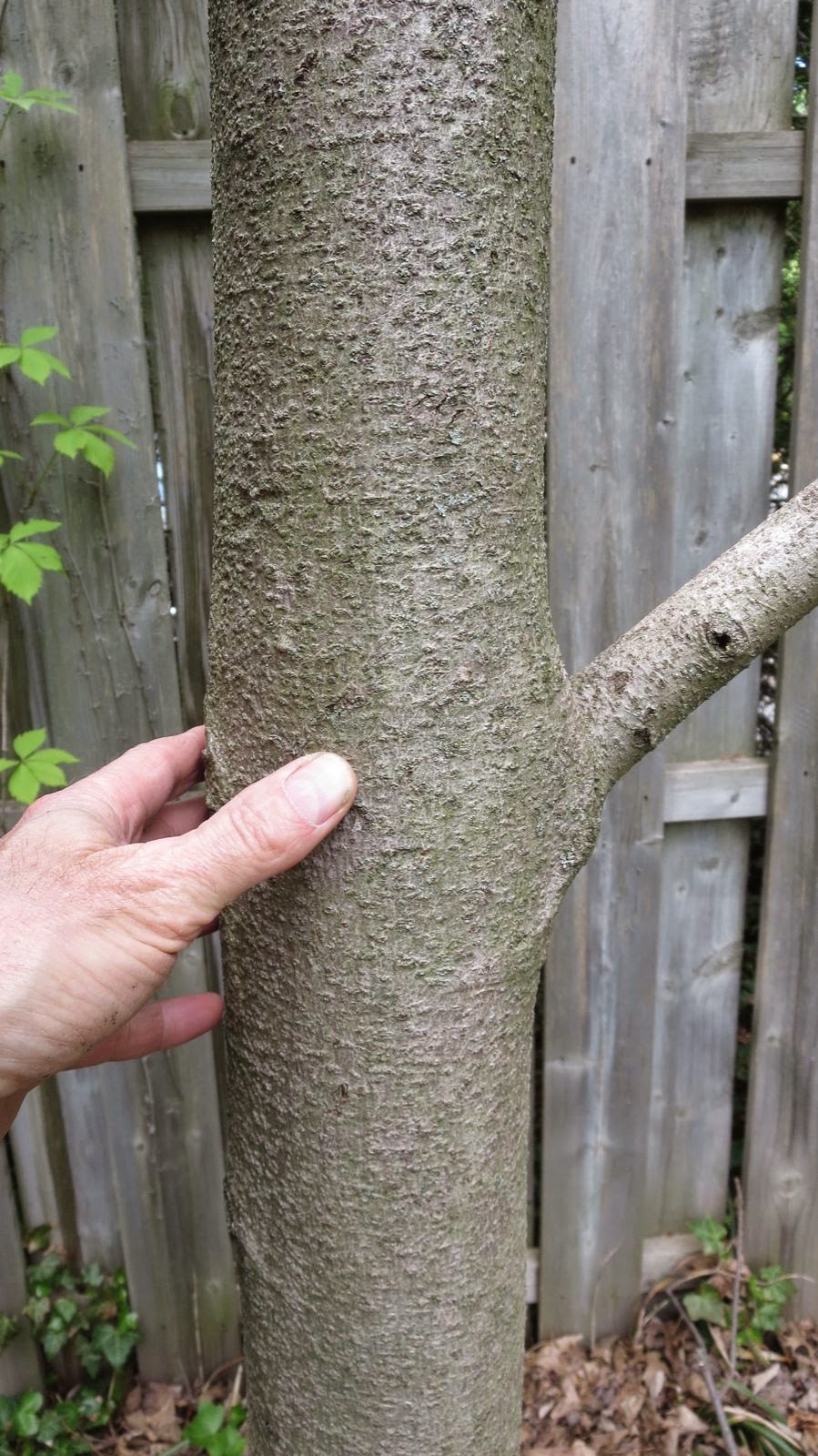 But pawpaw growers shouldn't have to depend on chance discovery. There needs to be an internet dating service for fruit trees. Sometimes it takes a village, or at least a good network.

Update, June 9: Just met a neighbor named Joe who has replaced the lawn in his side yard with four varieties of pawpaw and a lot of mulch. He says that wild pawpaws are common in Maryland, that raccoons and squirrels may be repelled by the bad-tasting skin of the fruit, and that it's easy to emerge from wild pawpaw patch with large buckets of fruit. I did not ask about any encounters with Susie, or if Marylanders are more adept at doing the hulu.