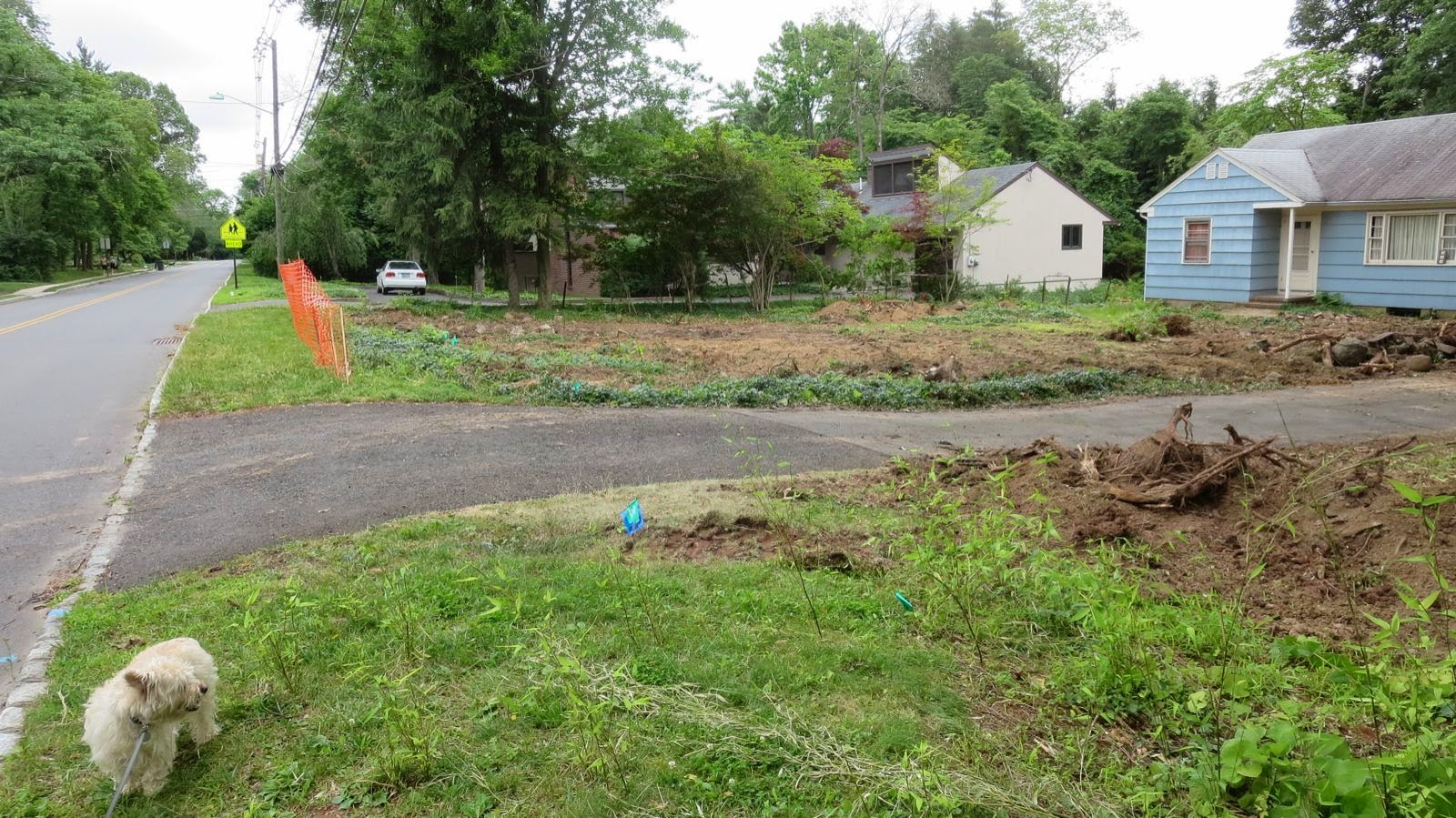 Update, July 1: Princeton's town arborist, Greg O'Neil, who was out of town when this incident occurred, reports that a permit had been granted to remove six trees, and that four additional trees (evergreens that were apparently not covered by the ordinance) were taken down.

Original post: My arborist friend Bob and I were driving down Snowden yesterday, on our way to plant two native butternut trees at a local church, when we passed by this scene. 25 trees had evaporated from the front and back yards of the property. The house looks like it will meet the same fate. Did the owner have a permit to take down so many trees? 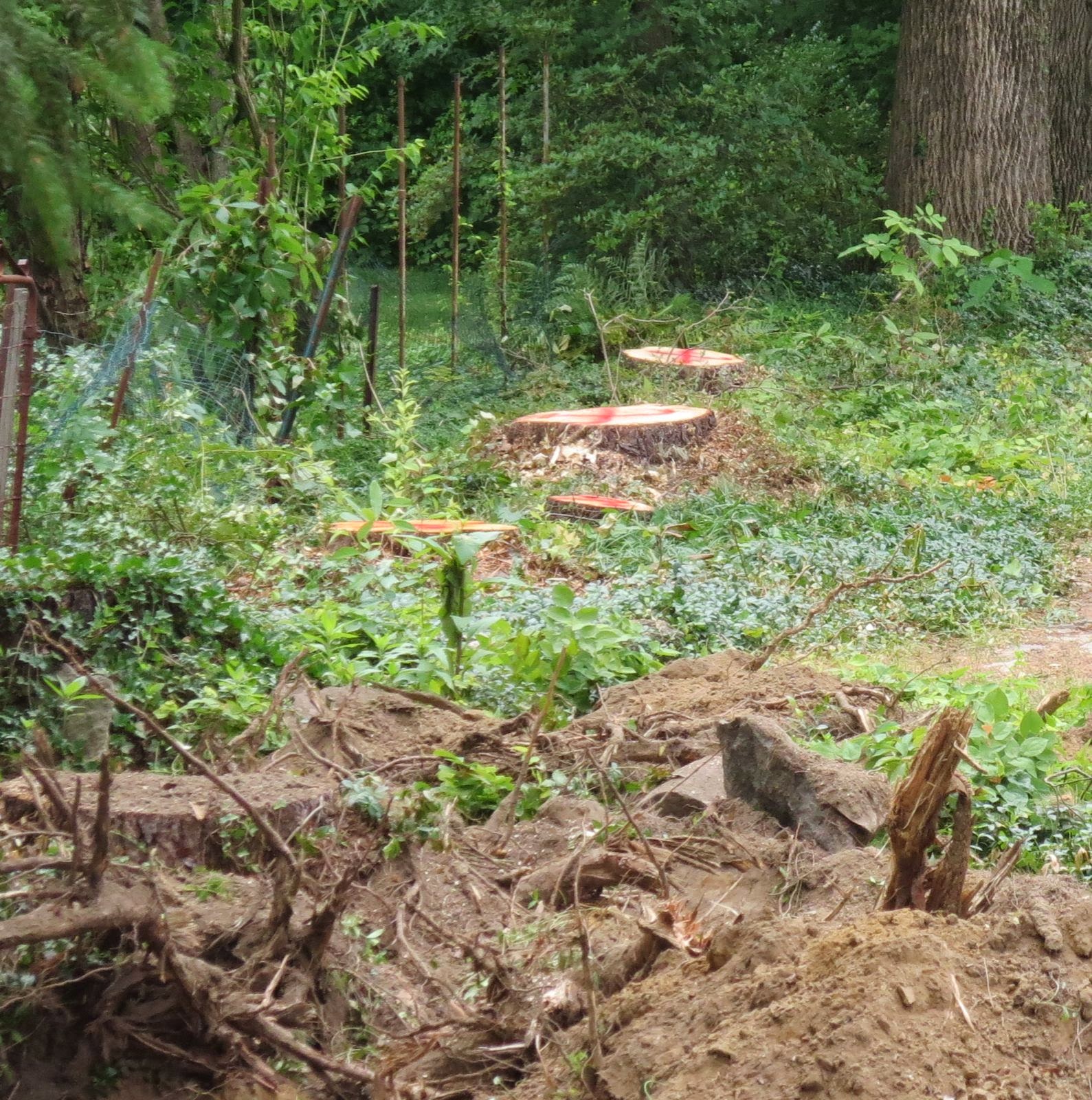 Later, I heard from a fellow member of the Shade Tree Commission that two policemen and the town's lead engineer had visited the property. The owner reportedly is claiming that a permit had been applied for but not yet granted. The red marks on the stumps in the background may indicate that the stumps, being evidence, are not to be removed until the matter is settled.

As it happens, a tree ordinance for the consolidated Princeton has just been completed by the Shade Tree Commission, and introduced with minor revisions by town council. Both township and borough had tree ordinances that are still in effect. 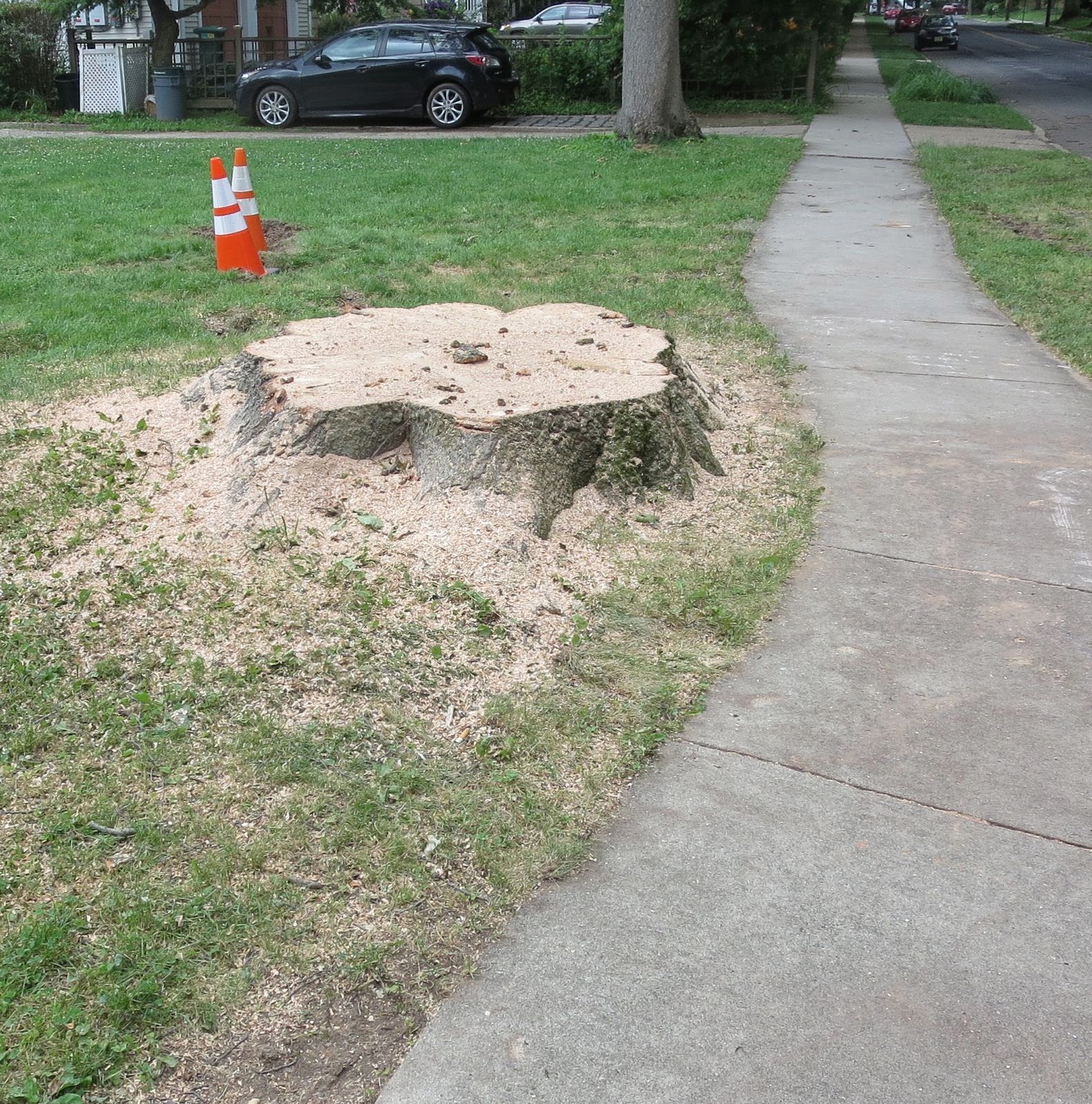 Another tree in the neighborhood came down yesterday--a 4 foot diameter pin oak in the 200 block of Hamilton Ave. The presence of a town truck at the scene suggested it was in the public right of way, even though it was on the owner's side of the sidewalk.

Princeton has been losing a lot of pin oaks and red oaks to bacterial leaf scorch, though the reason for this tree being lost awaits confirmation. 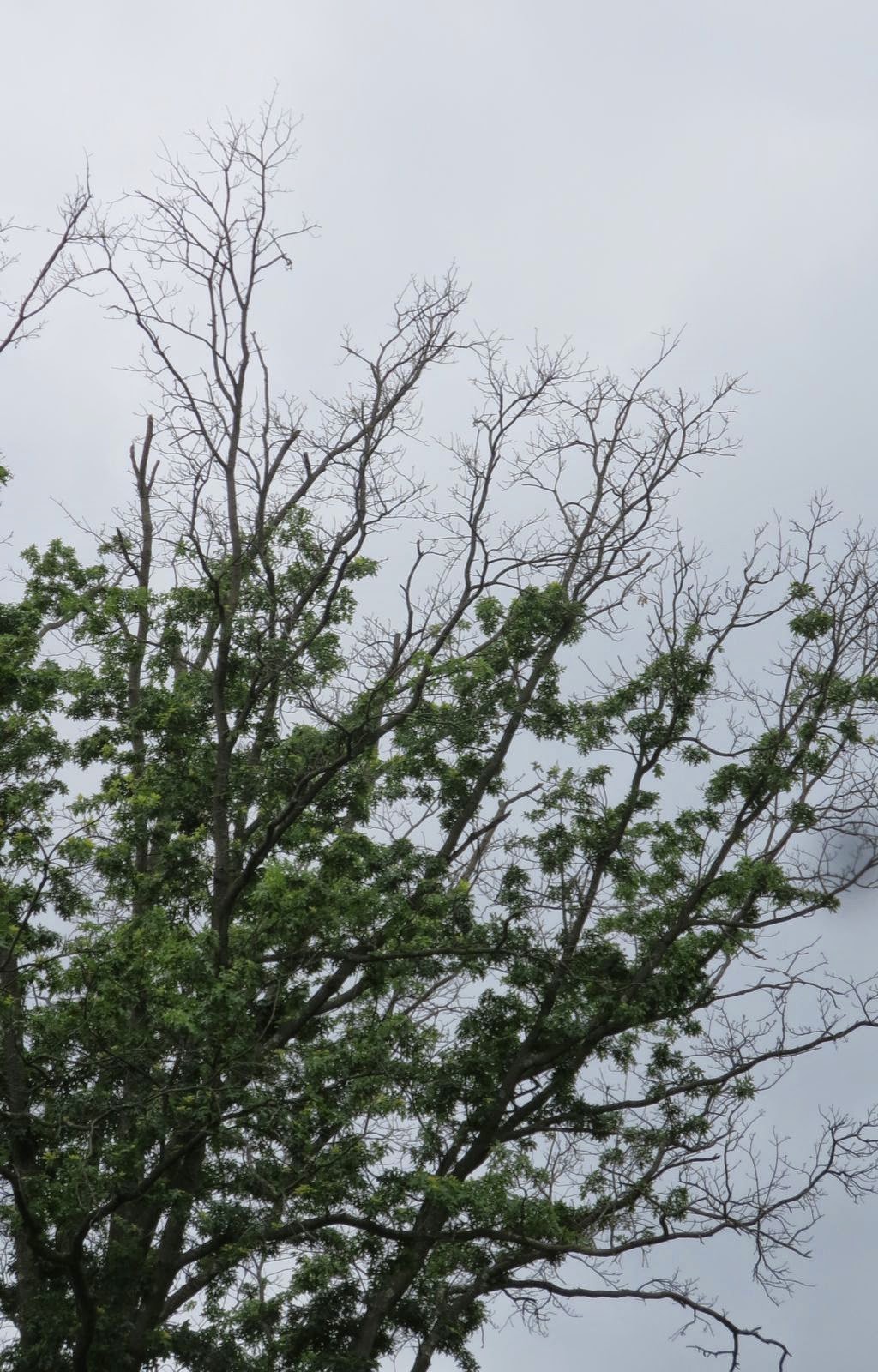 Bacterial leaf scorch, as can be seen in this tree on Franklin Ave, expresses itself through dieback at the top of the tree. 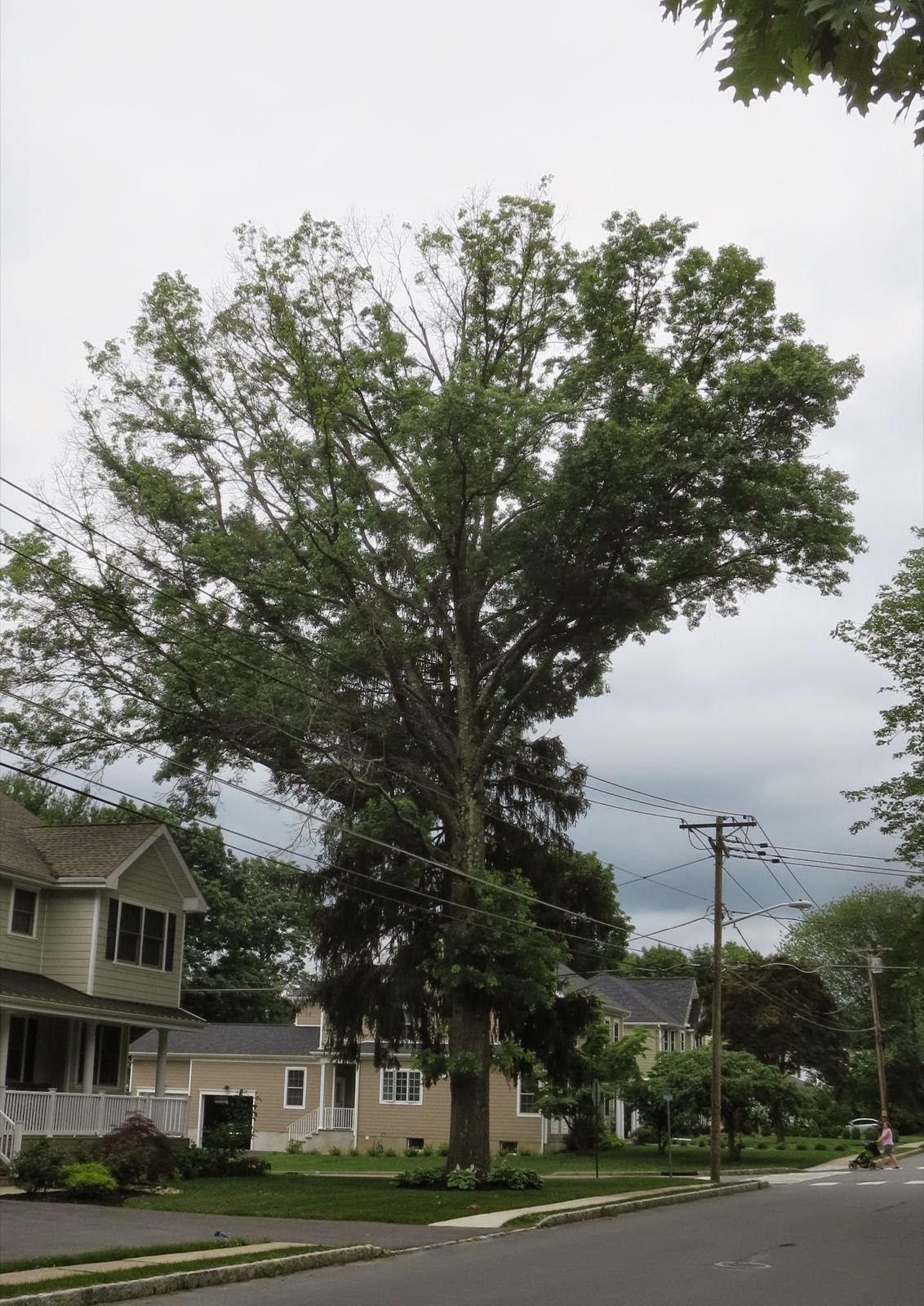 This pin oak, just across the street, though it's showing less dramatic symptoms, is still clearly thinning out at the top.

Unlike many towns, Princeton has an arborist, and an excellent, devoted one at that. If you have a tree issue on your property, contact public works, either directly or through your arborist, to come up with a solution that meets your needs and the requirements of the tree ordinance.
Posted by Steve Hiltner at Friday, June 27, 2014