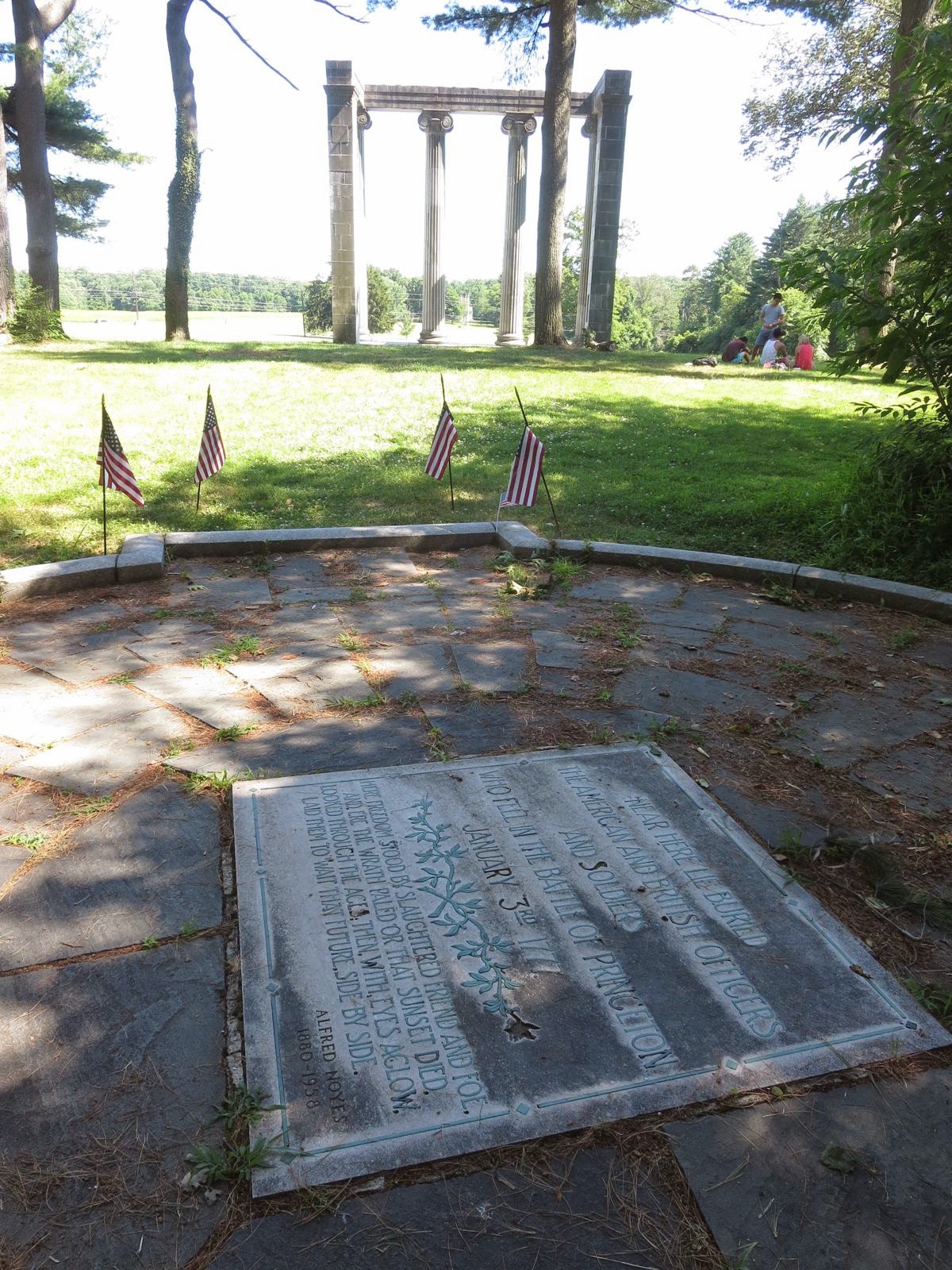 If the plaque commemorating those who died in the Battle of Princeton got overgrown by vines, people would understandably be upset. But how about botanical tributes at the Battlefield? Mercer Oak The Second is doing well, carefully protected by fencing and no doubt periodically checked for health. 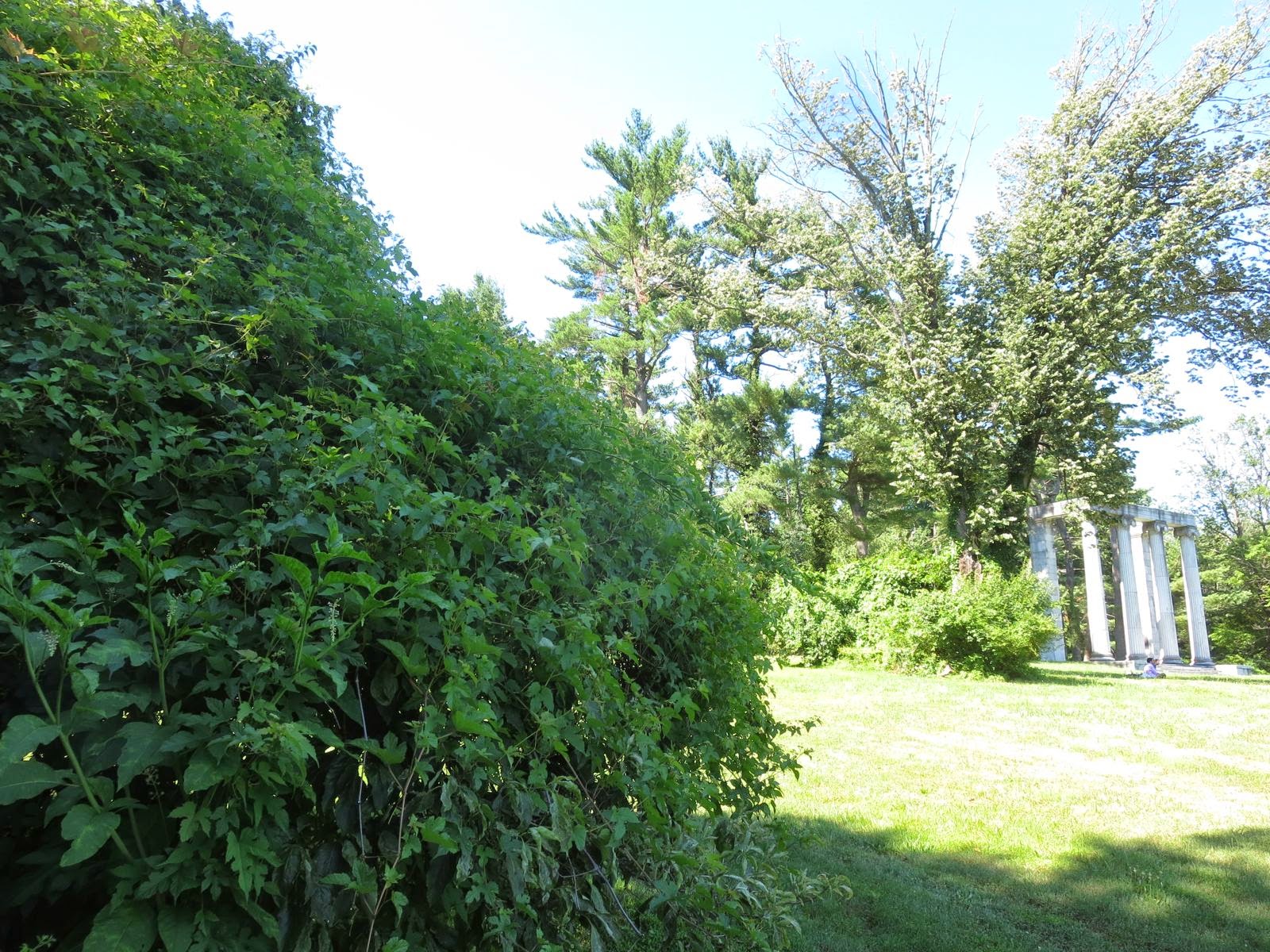 But there are other trees planted in memory of the battle that have been abandoned to whatever fate may come their way. Not far from the Ionic Colonade pillars are flowering dogwoods that were planted all along the perimeter of the north field. Those to the right of the pillars are doing fine. Those on the left are being smothered by vines--mostly porcelain berry and wild grape. 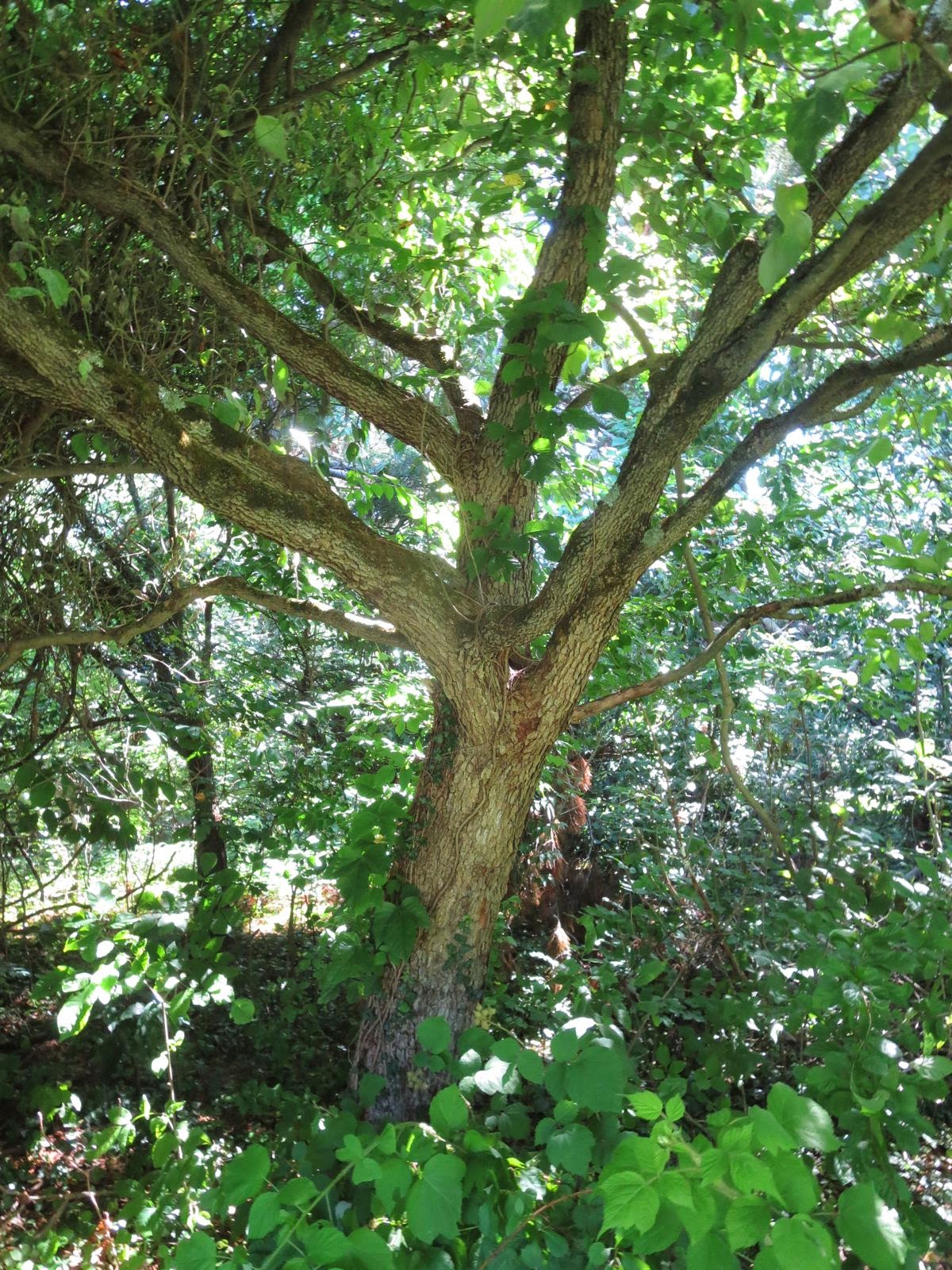 Some are so badly blanketed that you can't tell a dogwood is there until you peak under the mass of vines and see the venerable trunk of the dogwood holding up the free-loading foliage. 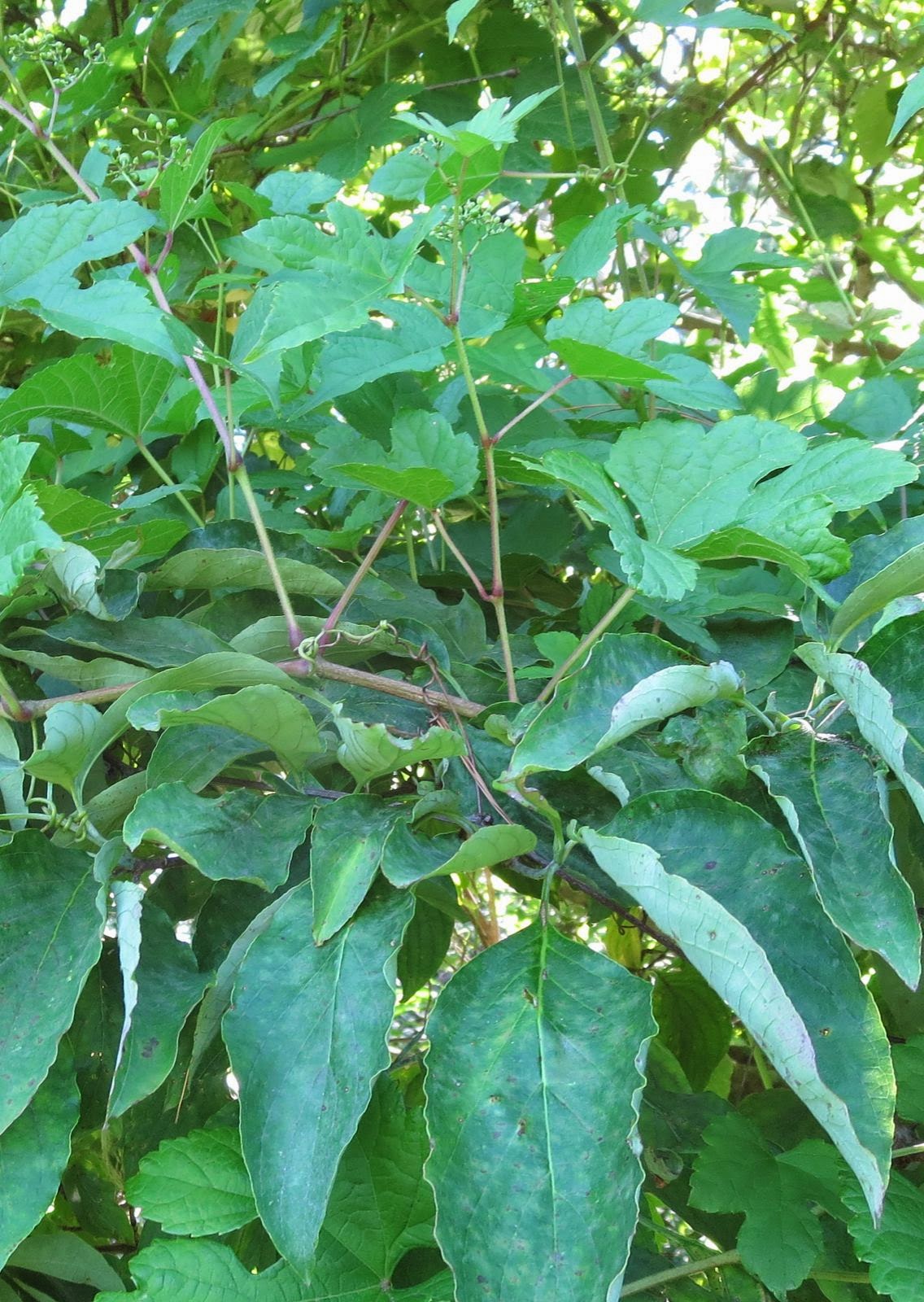 In this photo, porcelain berry leaves are on top, grabbing the sunlight from the flowering dogwood leaves below. I liberated a few of the dogwoods from the smothering vines some years back, but they really won't be saved until their protection becomes hard-wired into the Battlefield's maintenance. Here, again, the focus on lawn mowing to the exclusion of all other aspects of grounds maintenance has allowed an attractive and meaningful planting to be badly neglected.

It's really very simple for a crew to go in, cut the vines at the ground, maybe spray a dab of 20% glyphosate on the cut stem, and preserve these historically important plantings. It might add a couple hours a year of maintenance time. 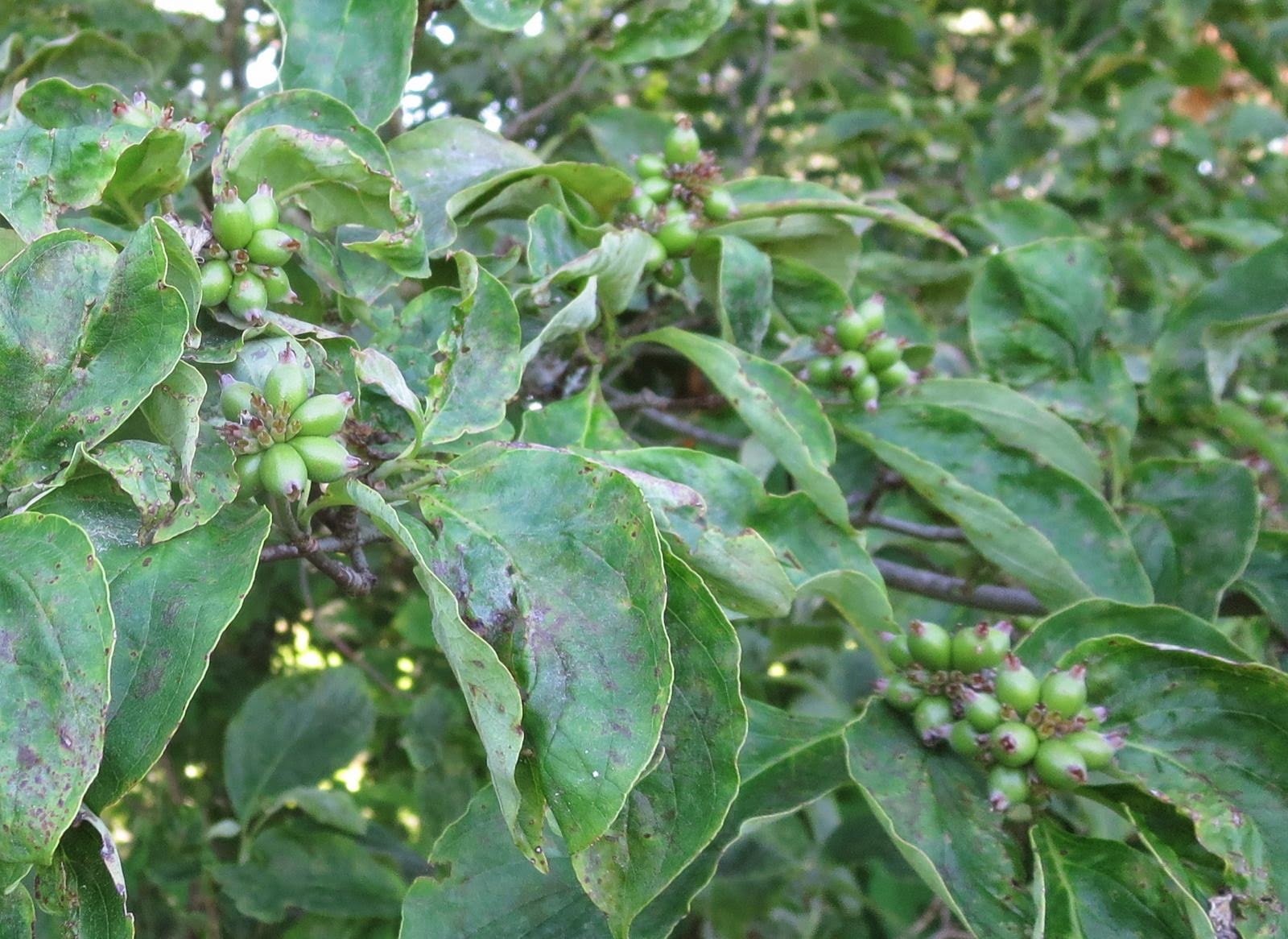 The dogwoods also provide nutritious berries well timed with fall migrations, that is, if they get enough sunlight to power the production of the berries. 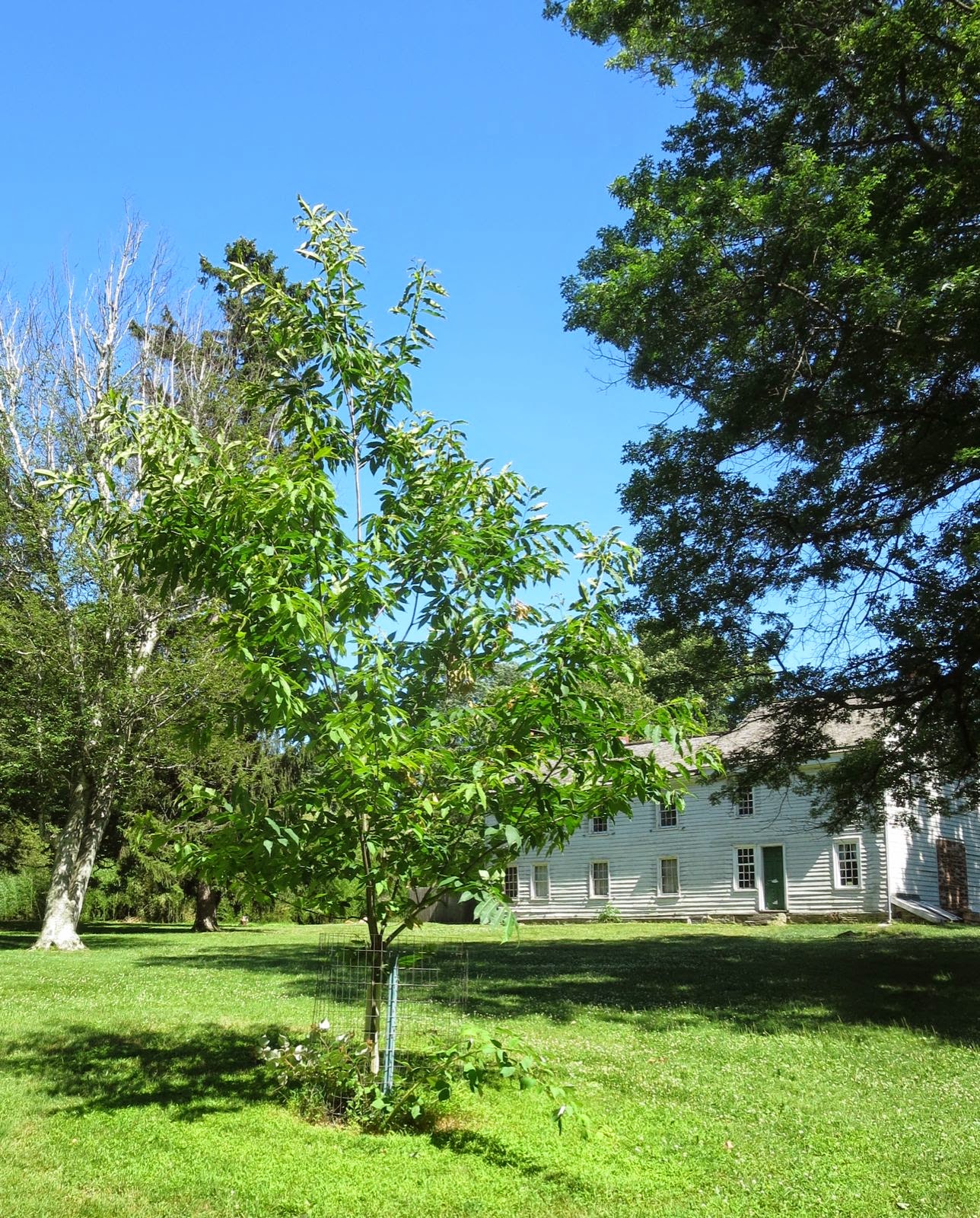 There are other plantings at the battlefield that are threatened, but not by lack of maintenance. We had high hopes for this 15/16th native American chestnut, planted in front of the Clark House. It's nearly 30 feet high now, 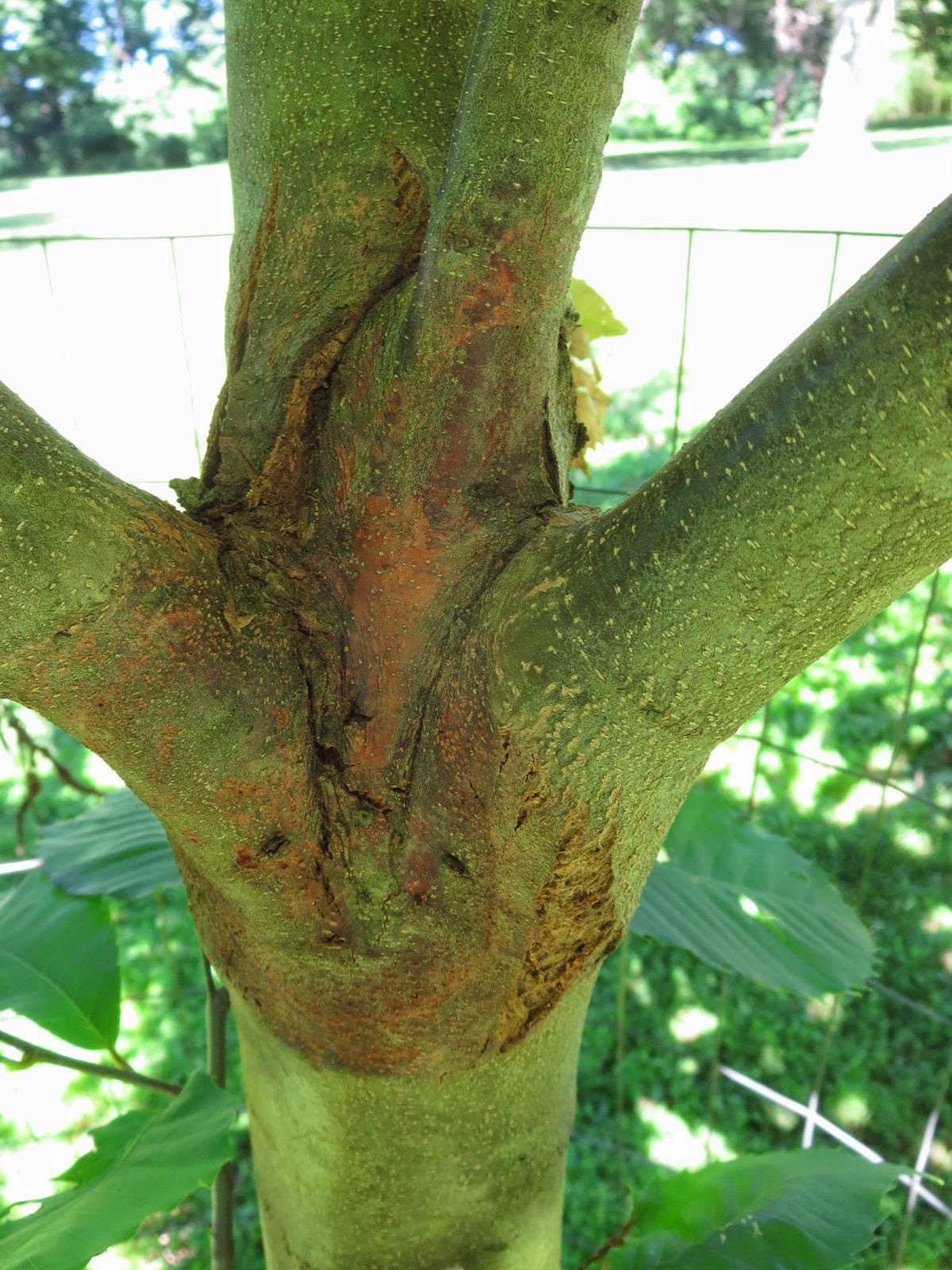 but I was recently told by Bill Sachs that the canker on its trunk--caused by the chestnut blight that nearly wiped out chestnuts a century ago--is not healing, suggesting that the tree will eventually succumb. Though this particular tree came out of a breeding program meant to generate blight-resistant native chestnuts, only about half of the trees will actually show resistance. Of the four chestnuts planted at the battlefield, two have succumbed, and this one may as well. 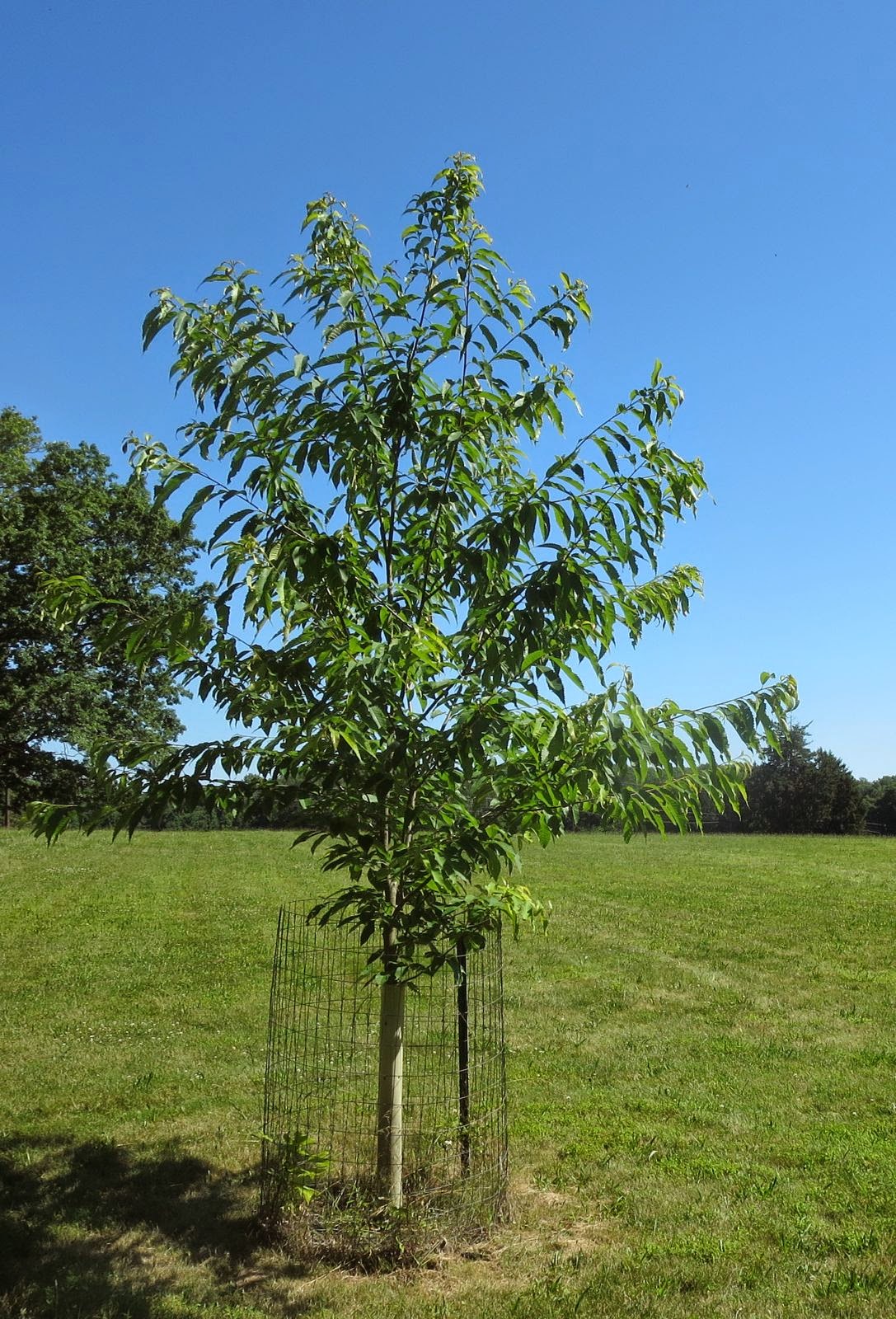 The fourth, however, is doing fine, 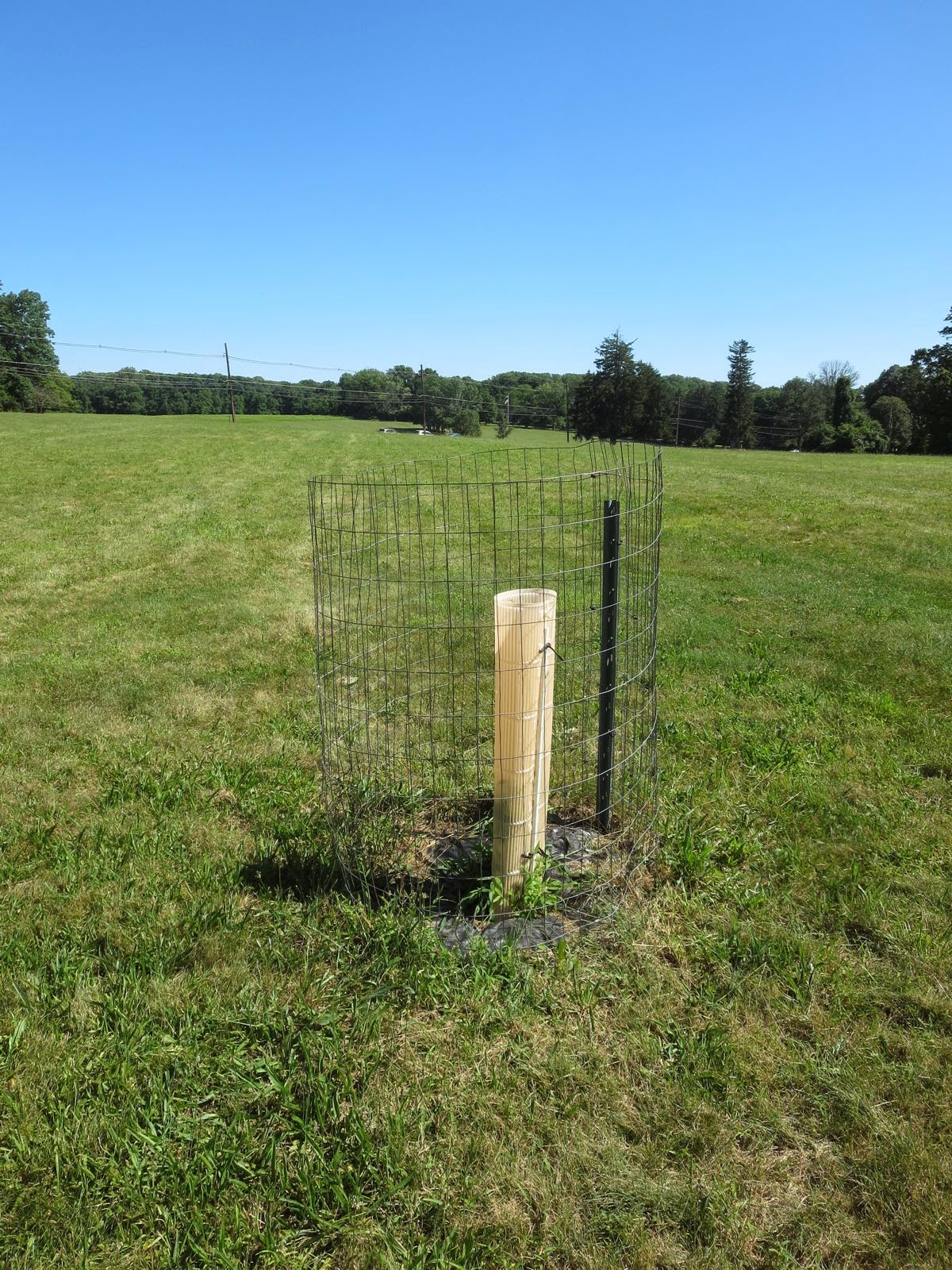 and Bill has already planted two replacements for the ones that died. 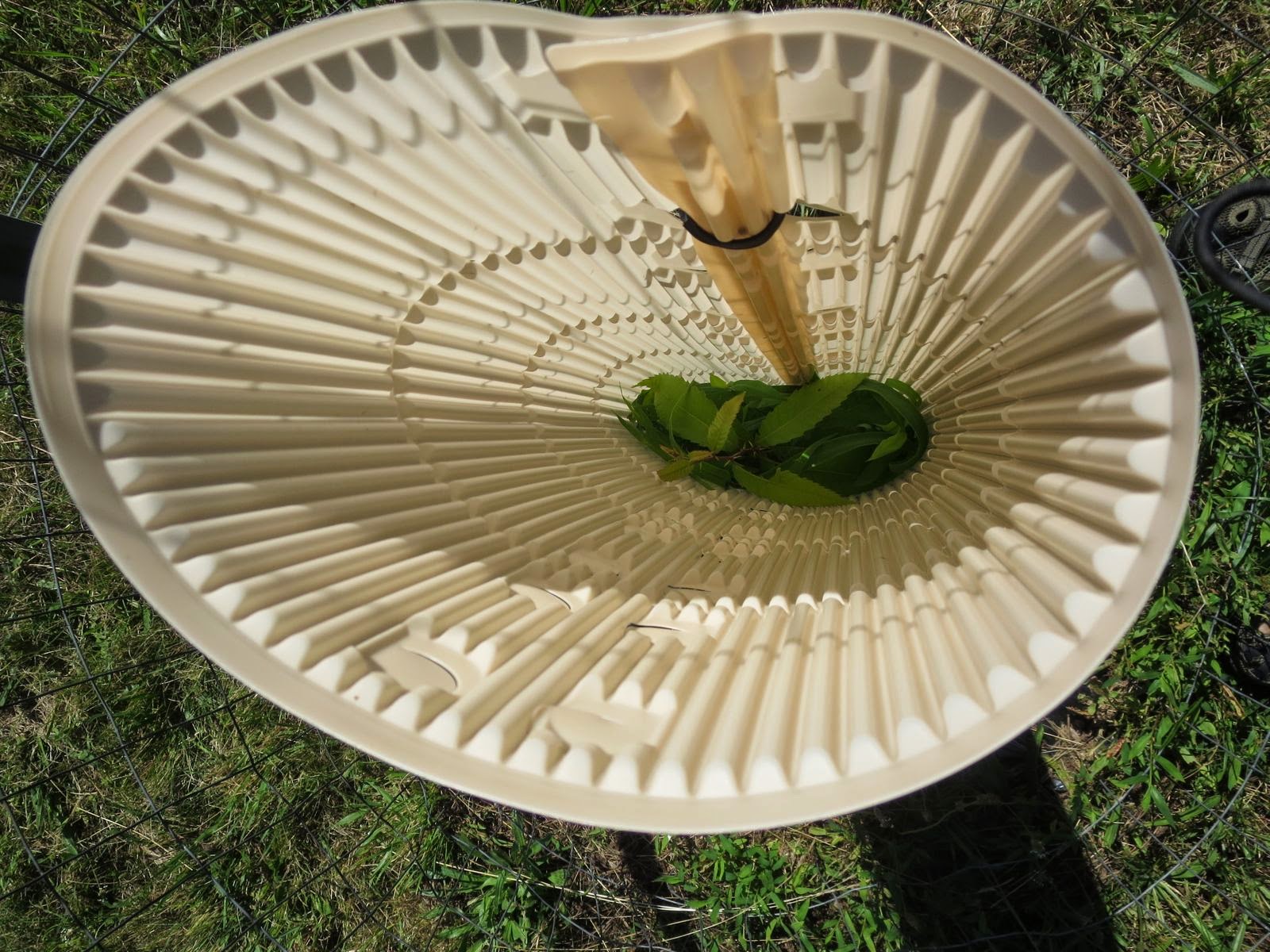 A larger question is whether the Battlefield wants to look anything like it did at the time of the battle. There were no lawnmowers back then, unless you count livestock, and these turfgrasses are not native to America. It's great to have a nice surface to walk on, have picnics, fly a kite, re-enact. Keep some turf, but should the landscaping really have nothing to do with historic accuracy?

Many battlefields around the country have made an effort to restore their landscapes to better reflect the era in which a battle took place. Mowing is very time-intensive, and most of the turf here is never walked on. The open feel is nice, but that could be maintained by reducing somewhat the mowed expanse, and restoring native grassland in unused areas, with broad trails through them kept mowed so that people can have the experience of walking through an authentic 18th century meadow. An orchard, too, would add some authenticity. But again, this means that an institution must go beyond lawnmowing in its conception of what constitutes caring for a landscape.

Begin, at least, with the dogwoods.
Posted by Steve Hiltner at Sunday, July 20, 2014